Home Features Voices for the Voiceless 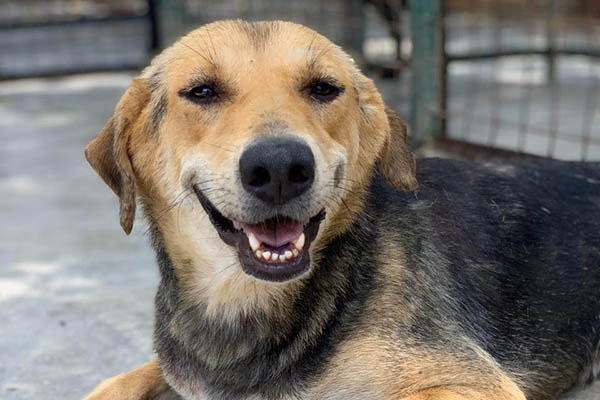 One of the dogs at the ACF Shelter in Karachi. Courtesy ACF

Lacking government support, Pakistanis take it upon themselves to help the country’s burgeoning population of stray animals

Renowned Urdu humor writer Mushtaq Ahmed Yousufi once joked that Muslims only keep pets that they can eventually slaughter for food. “The thing that has made the greatest sacrifice for Islam is goats,” he added. Said in jest, his words are a grim reality for countless animals in Pakistan. Social media has helped bring knowledge of their plight to the average citizen, encouraging them to step up and offer help, even in the face of government apathy.

Groups offering aid to Pakistan’s abandoned and stray animals—whether dogs, cats, donkeys or even birds—have sprung up across the country in recent years, relying primarily on donations and word of mouth to keep their life-saving operations going. From Punjab capital Lahore to Sindh capital Karachi, and even federal capital Islamabad, the list of non-governmental organizations catering to animal welfare seems to grow by the day. For Parivash Nadeem, a resident of Rawalpindi, animal activism is a more personal affair.

The 23-year-old has taken it upon herself to shelter and protect animals wherever she finds them, currently housing 20 cats and four dogs in her three-bedroom house. Over the course of her young life, she estimates having rescued around 200 stray cats and dogs, finding homes among friends and family for those she cannot house herself. “I grew closer to animals after my father’s death,” she tells Newsweek from her home. Recalling his demise, she bitterly notes that relatives would spend hours at their house debating their share of her father’s inheritance while “some of our pets went days without eating a single bite over his absence.”

Nadeem frankly admits that her pets are her “best friends,” each with their own individual personality and behavioral tics. One of her dogs, Tommy, has been with her since she was 8 years old. Her affection for cats, meanwhile, is far more recent, due to her mother’s hesitance in allowing cats inside the house over cleanliness concerns. But once restricted to outside the house, now her cats roam freely, having finally won over her entire family.

While she’s won over her family, Nadeem says her neighbors are less enthusiastic about her work. She says their neighbors often complain about the cats wandering around the neighborhood, claiming they are unclean and unhygienic. “I am determined to challenge people’s mindsets and raise awareness among the people,” she says, admitting that this is not an easy task because most people counter that the country needs better rights for humans before it can cater to its animals.

Despite this, says Nadeem, she has witnessed a gradual increase in love for stray animals among Pakistanis. However, she notes, people still prefer to keep “pedigree breeds” as pets. Animal welfare groups in the rest of Pakistan echo this.

In Lahore, Dr. Muhammad Fahad Aziz of the Pets and Vets Clinic says he treats around 20-25 stray animals for free every month when passersby bring them in. “We have formed an NGO, Save the Animal Foundation, to help raise funds to treat stray animals,” he says, but notes that it is rare for anyone to adopt the strays they bring in for treatment.

“From all the stray animals that we treat, barely two or three of them get adopted,” he says. “For the rest, we neuter and release them,” he added. 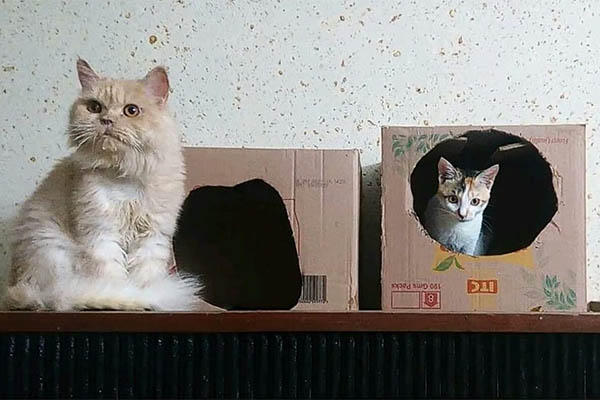 Two of Paravish Nadeem’s rescues at her home in Rawalpindi. Photograph by Nazar ul Islam

One organization seeking to encourage the adoption of strays is Todd’s Welfare Society, based in Lahore. Its founder, Kiran Maheen, told Newsweek that the organization had set up a shelter last year, which can accommodate around 100 dogs, 100 cats and 30 birds. She says the organization also rescues donkeys, horses and mules but takes them to the University of Veterinary Sciences for further treatment.

“We have adoption drives once or twice a year,” she says, adding that people are encouraged to visit, meet the rescues, and hopefully adopt. “We also take our rescues to events and awareness drives at schools and open air markets to raise awareness about animal rights and stray adoptions,” she adds.

Pakistan’s largest city, Karachi, also has its own animal shelters. It’s oldest is the Edhi Animal Hostel, while the first formal shelter was built by the Ayesha Chundrigar Foundation in 2013. “Homeless and working animals are at the lowest rung of the welfare ladder and there was an urgency to do something immediately,” a representative of the organization told Newsweek. With space to house around 500 cases, the organization says it has adopted a trap, neuter, release program to help keep numbers manageable and ensure the maximum number of animals can be helped. “Once we fix and vaccinate the dogs and cats, we release them in areas we have deemed as ‘safe zones,’” it adds.

The ACF, like the experiences of Nadeem and Dr. Aziz, also believes most people who are willing to adopt are looking for pedigrees. “People are more keen on adopting fancy breeds rather than our Pakistani breeds, which are homeless and face abuse on the streets,” it says.

Beyond convincing people to adopt non-pedigree animals, there is another challenge in ensuring that those who do adopt do not treat them as disposable objects. Nadeem says she has taken to vetting anyone interested in adopting one of her charges after a few too many bad experiences with people who take in strays and then abandon them.

“My mother rescued a small kitten and I put up pictures for its adoption,” she says or one such occurrence. A family adopted it in short order but then stopped providing updates, claiming the cat had run off. Finally, after several days of queries, the family admitted they had abandoned the cat in a nearby market and returned it to Nadeem.

“Now I don’t give them up for adoption unless I’m sure that they will be well looked after,” she says, adding that she now asks for CNIC numbers and regular updates post-adoption to make sure there are no concerns. She also requests that any animal be returned to her rather than abandoned on the streets if someone cannot keep them.

TWS has a similar arrangement, encouraging people to make sure they are capable of taking care of pets before they adopt any animal. “We protect animals by providing shelter and care for those that are lost, abandoned, neglected, injured, sick or abused; improving the quality of life of animals and placing them into loving and permanent homes,” says Maheen. 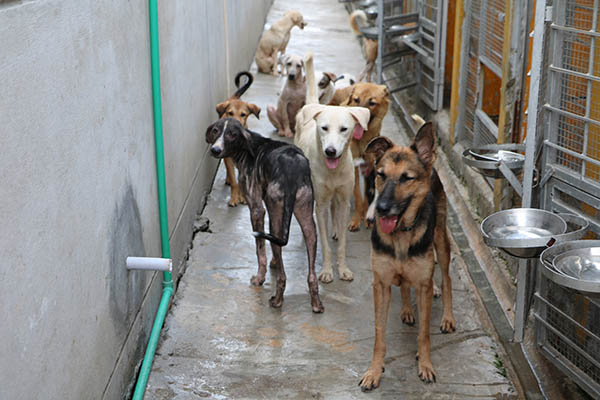 The biggest barrier to the care of animals for everyone working for their welfare is a lack of funds. Nadeem funds her passion entirely of her own accord, saving up money to ensure she can care for any animals requiring assistance. Her family, she notes, has been very generous, with her mother and siblings often pitching in. She also encourages people to not worry about buying expensive pet food, noting that there are cheaper, sustainable alternatives. “I boil chicken and put rice in the gravy and then preserve it. It’s good for their stomach and lasts at least a week,” she says, adding bread with a little milk is also a filling meal.

TWS’s Maheen says it runs via donations and fundraisers, adding they have been incredibly lucky to have been helped by some very kind and compassionate volunteers. “We always hear that Pakistan is a very charitable nation, but now I have personally experienced it,” she says. ACF has a similar setup; it runs solely on donations, is exempt from paying taxes, is accredited by the Pakistan Center of Philanthropy, and can receive foreign funding. “We are so grateful for the kind and generous donors, some large corporations but mostly small private donors that make up our diverse donor network,” it said, adding that their work would be impossible without the support of the community.

The next challenge, says Nadeem, is combating the government’s attempts to control stray populations through mass culling—usually by either feeding them poisoned meat or shooting them dead. This has provoked a lot of outrage on social media in recent months, as the government often “boasts” of its success by sharing horrifying images of dozens of dead animals piled atop each other.

“In my opinion they should be relocated or neutered,” says Nadeem. “It is very unethical to poison them. In fact, it contaminates the environment, which also leads to the death of other birds and animals,” she says, adding that this also goes against the principles of Islam.

TWS this month attempted to draw global attention to this barbaric practice by encouraging influencers on social media to voice their anger at the government’s actions. In postings on Twitter and Instagram, it urged Islamabad to adopt the policies of Turkey, which has a robust trap, neuter and release program for all “community pets.”

Unfortunately for ACF, it’s efforts to successfully implement a trap, neuter, release program in Pakistan were last month met with the harsh reality of Pakistan’s disdain for animal welfare. In a posting on Facebook, the organization announced that hundreds of dogs that had been released in a “safe zone” with no nearby residences were poisoned or shot to death in an area they would gather to be fed by the rescue workers. “All our success stories are dead,” said a tearful founder Chundrigar in a posting on Facebook. “There’s really no hope left,” she added. 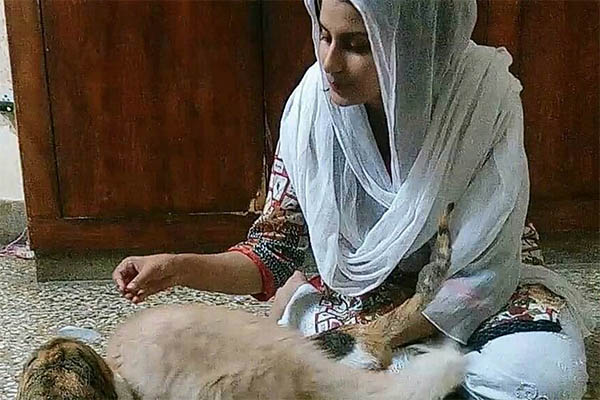 Paravish Nadeem feeds some cats at her home in Rawalpindi. Photograph by Nazar ul Islam

Despite the setbacks, TWS and ACF both are committed to their efforts for animal welfare. Both have been organized welfare camps, and even stepped up to help animals that had been abandoned in wet markets during the lockdowns imposed to curb the spread of the novel coronavirus in March and April.

Nadeem says individuals can also help out stray animals in their vicinity by being aware of the effects humanity’s actions can have on them. “Fireworks often scare cats [and dogs],” she tells Newsweek. “It’s so harmful that it can even damage their heartbeat [because they get so scared],” she added.

She hopes groups such as ACF and TWS will continue to prosper, adding it is also a personal dream of hers to set up her own shelter. “My aim is to open a big shelter,” she says, adding she would use it to neuter stray animals to reduce their populations humanely. “I really want to help the speechless.”