Wahab Riaz Out of Champions Trophy 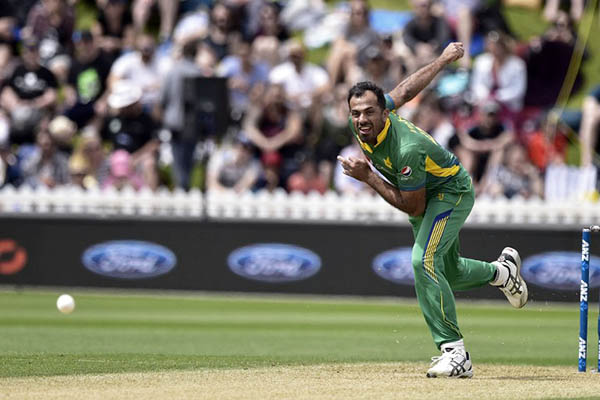 Bowler ruled out of remainder of tournament due to ankle injury

Pakistan will seek to bring in a replacement for Wahab Riaz after the fast bowler was ruled out on Monday of the remainder of the Champions Trophy with an ankle injury.

The 31-year-old left-arm quick suffered the setback while bowling during Pakistan’s crushing 124-run defeat by title-holders India at Edgbaston on Sunday in what was the first match of the one-day international tournament for both rivals.

A miserable match for Riaz, flayed by India’s batsmen for a hugely expensive 87 runs in 8.4 overs, ended when he fell in his delivery stride and sustained an injury that saw him leave the field. It also meant he was unable to bat as Pakistan, chasing a revised target of 289 in 41 overs in a rain-affected match, slumped to 164 for nine after India had piled up 319 for three in 48 overs.

“Wahab Riaz twisted his ankle in yesterday’s [Sunday’s] ICC [International Cricket Council] Champions Trophy match against India,” said a Pakistan Cricket Board statement. “A scan has confirmed that Wahab Riaz suffered a deltoid ligament complex after an injury whilst bowling during the India v Pakistan match on June 4. It will take a minimum two weeks to recover from this injury. Wahab will not be able to continue to play in the remaining games of the Champions Trophy.”

The statement from the PCB added they had made an official request to the ICC’s event technical committee to call-up a replacement for Riaz.

Pakistan need to beat South Africa, the world’s top-ranked ODI side, in their next Group B match at Edgbaston on Wednesday, if they are to have any chance of reaching the semi-finals of a tournament featuring cricket’s leading eight teams in the format.

Pakistan conclude their group campaign against Sri Lanka in Cardiff on June 12.