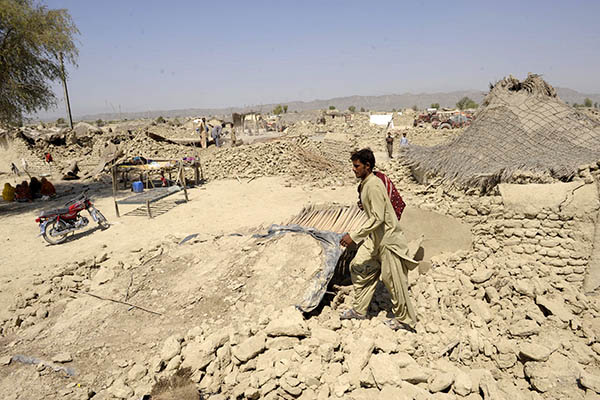 Tens of thousands of survivors of Pakistan’s earthquake waited for help in soaring temperatures Thursday, as the death toll rose to nearly 350 and anger grew at the slow pace of government aid.

More than 100,000 people made homeless by Tuesday’s 7.7-magnitude quake spent a second night in the open or under makeshift shelters as response teams struggled to reach the remote region in Balochistan province.

Abdul Latif Kakar, the head of Balochistan’s Provincial Disaster Management Authority, said the death toll stood at 348, more than 300 of them in Arawan district, with more than 500 injured. He said the quake had left more than 100,000 people homeless in Arawan alone.

The sheer scale of the territory involved is daunting—the population of Awaran is scattered over more than 21,000 square kilometers—and infrastructure is extremely limited, with few medical facilities or even roads.

On top of the remote, rugged terrain, the area is also home to Baloch separatist rebels waging a decade-long insurgency.

Highlighting the danger from militants, a helicopter carrying the head of the National Disaster Management Authority came under rocket fire in Awaran, though no damage was done and no one was hurt.

The quake is already Pakistan’s deadliest since the devastating Kashmir tremor of 2005, which killed 73,000. The toll is expected to rise further as rescue teams dig through the rubble of countless flattened mud-brick homes.

Interior Minister Chaudhry Nisar told Parliament “huge activity” was under way to help those affected but he admitted teams were struggling to reach some areas, even 40 hours after the quake. The government is preparing to send more than 14,000 tents, Nisar said, and is using a C-130 transport plane to reach difficult areas.

“We have a major challenge in accessing and reaching far-flung areas to provide them logistic support,” he said. “Presently some 1,000 troops of Pakistan Army are available on the ground while army has dispatched another unit to the affected areas.” Search and rescue teams with search dogs and technical equipment have also been sent, he added.

The Army has sent troops, medical staff and helicopters to help with rescue efforts, along with seven tons of food and a ton of medicine.

In Arawan town, around 200 angry survivors demonstrated outside government offices complaining they had not been given food or shelter.

“We have not received anything from the government. We have not got any relief, there is no supply of foods or medicine,” said furious villager Abdul Latif.

Temperatures in the arid region were reaching 42 degrees Celsius and many survivors said they were desperate for some relief from the blistering heat.

“We need shelter, we are lying under the open sky and have no tents, we need tents immediately,” said 54-year-old Chanda, his shirt torn open. “We need food and water, but first of all we need shade from the scorching sunshine.”

Besides flattening homes and affecting more than 300,000 people in six districts, according to the Balochistan government, the earthquake even created a new island about 650 feet off the coast.