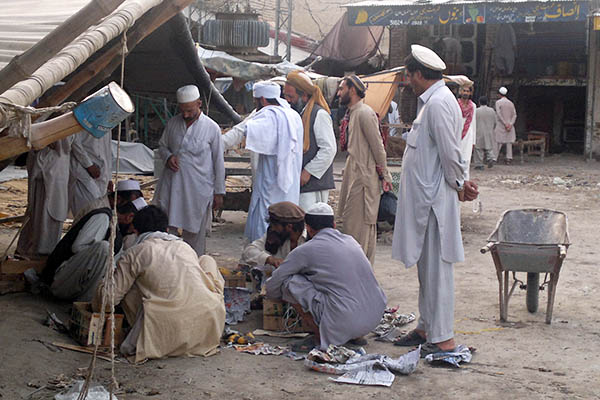 Army claims it has killed around 200 militants in three days, as relatives of civilians left in North Waziristan hope for the best.

In the dusty, sunbaked streets of Bannu, thousands of people who have fled a major military offensive in North Waziristan wait anxiously for news of loved ones left behind.

Many speak of civilian casualties in the airstrikes that were mounted before the formal start of the operation on Sunday. Others questioned the utility of an offensive, which was telegraphed to militants weeks in advance, allowing them to slip away.

The bustling walled town of Bannu, some 10 kilometers from the border with North Waziristan, is accustomed to sudden influxes of civilians fleeing the regular eruptions of violence in the tribal areas, which are havens for militants. Rents in the town have soared along with the temperature as local landlords and hotels take advantage of the latest flow of refugees, who began coming in late May following airstrikes.

Razaullah, 10, fled Miranshah along with seven family members. But his father, a tribal elder, was left behind. “We have had no contact with him since the launch of the operation, we are worried about him,” he said. “Father was urging us to leave as soon as possible. I miss my school and school friends.”

The Pakistan Army has said around 200 militants have died since a long-awaited offensive began on Sunday, a week after an all-night siege on Karachi airport claimed by the Taliban. It has been impossible to verify the toll independently or the identity of those killed.

Hundreds of tribesmen crowded around a bus stop in the town’s main bazaar on Tuesday, hoping their loved ones would arrive soon by the lone road that links Bannu to the tribal zone.

Laver Khan, a trader from Datta Khel village, fled to Bannu five days ago and rented a house for his 25-strong family. Now another 75 people from his village have also taken shelter in the cramped house, he said. “They [authorities] should have given us a chance to vacate our areas,” Khan said.

The Army also imposed a curfew and issued shoot-on-sight orders for anyone leaving their homes in the fighting zone—an order that was withdrawn on Wednesday. “I haven’t contacted them since days, I am worried what is happening there,” he said.

Haji Saleem Khan, a 60-year-old from Shawa village who owns a transport business, said he visited Bannu’s taxi stand every day to find out whether the road to the tribal area had opened to civilian traffic. He said he plans to take a taxi to collect his relatives as soon as the curfew is lifted.

But Saleem questioned why tanks, troops and jets were bombing the area when the fighters there had already left. “Why did they begin this operation so late? Most of the militants has already fled, those leaving behind are non-combatants,” he claimed. Like many others, Saleem also suggested that the airstrikes were not as surgical as the military claimed. “They killed women and children in the airstrikes, I myself took out dead bodies from under the rubble,” he said.

Zahidullah Khan, 31 from Mir Ali, said he would prefer drone strikes—a controversial view in Pakistan where the unmanned U.S. aircraft are often seen as a violation of the country’s sovereignty. “A U.S. drone hits its target accurately and does not cause other damages but jet fighters smash everything,” Khan said.

An AFP reporter in Bannu said landlords had doubled their rents and hotel-owners had increased rates fivefold to take advantage of the influx. Some 62,000 people are believed to have fled North Waziristan ahead of the operation, according to government figures, though many consider the true figure to be far higher.

The government is building camps just outside Bannu, but in the blistering summer heat refugees are avoiding them because of the lack of shade, electricity and running water.

Muhammad Rashid Dawar, a 42-year-old laborer, said he could not afford to rent accommodation and did not want to go to a camp, instead taking his wife and six children to a school that was closed for summer. He said he decided to leave in late May following airstrikes. “There was a huge bombardment, the whole village shook like an earthquake. I saw women and children buried under the wreckage of their houses and I knew it was time we must go.”