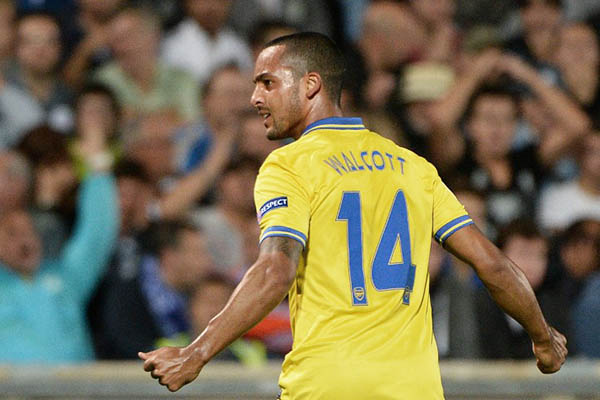 Arsene Wenger has revealed Arsenal winger Theo Walcott is on the verge of signing a new contract with the FA Cup winners.

Walcott’s current deal expires at the end of the forthcoming season and talks over an extension had dragged on without a successful conclusion for several months. But reports over the weekend claimed the 26-year-old England international had finally agreed to terms on a four-year deal worth around £100,000 a week.

Asked for an update on the situation on Sunday, Gunners boss Wenger confirmed he expects negotiations to be concluded shortly. “He hasn’t signed a new deal yet but we are getting closer and closer and hopefully we can get it done very soon,” Wenger said after Walcott scored the second half winner in Arsenal’s 1-0 victory over Wolfsburg in the Emirates Cup. Walcott’s goal against the German club came while he was deployed in his preferred central striker’s role.

After years of playing Walcott out on the wings, Wenger admits the former Southampton player is now capable of functioning as the main focus of Arsenal’s attack. “I’ve always said he’s a goalscorer because he has the speed, the movement and the eye for taking a chance when he gets in these positions. I believe he will score goals,” said Wenger, who also successfully used Walcott as a striker in last season’s FA Cup final win over Aston Villa. “He has his own way. He is not what you call the aggressive striker, he is the mobile striker, he lives on the quality of his movement. He turns up in the right space in the area, he anticipates well, and with his speed that makes him very dangerous. In his ideal he would like to play with a strong guy physically in the middle. But when I played him on the left he liked it as well because when he makes a good run he can score.”

Arsenal’s victory over last season’s Bundesliga runners-up completed a successful weekend as they won the pre-season Emirates Cup tournament in front of their own fans for the first time since 2010. They weren’t able to recapture the swashbuckling form that produced a 6-0 rout of Lyon on Saturday, but there was still much to encourage the always cautious Wenger ahead of next weekend’s Community Shield clash with Chelsea and their Premier League opener against West Ham on Aug. 9.

“The pre-season has gone well, but this period is to prepare to be efficient in the Premier League. The real truth starts when the season begins against West Ham,” Wenger said.

A solid home debut for Petr Cech following his £11 million move from Chelsea was undoubtedly a sight for sore eyes after so many years of indifferent displays from Arsenal’s goalkeepers. And Wenger admitted the Czech veteran’s presence should be a much-needed boost to his sometimes shaky defense.

“He is at the top level on the experience front. As well he is a good communicator, he brings a sort of calmness in the way he responds to situations that will help to lift the confidence of our defenders,” Wenger said.

There was also a tantalizing glimpse into Arsenal’s future as 17-year-old French midfielder Jeff Reine-Adelaide, signed from Lens last month, delivered an eye-catching display including the assist for Walcott’s goal. “He looks very promising and has fantastic potential,” Wenger said. “He needs to work with the first team for a year to develop, so he will stay with us rather than go on loan. In some situations he has the game of a 17-year-old, but he has also shown great potential and looks very advanced physically for his age.”