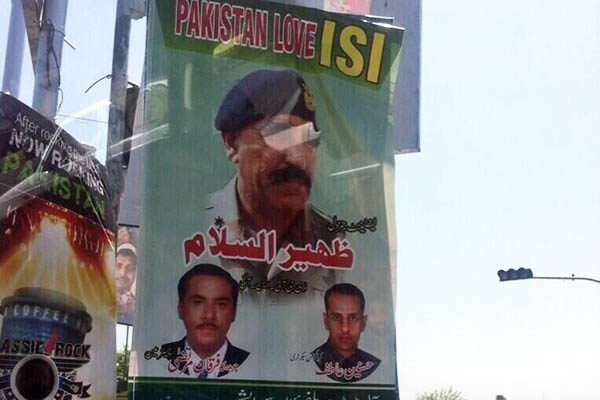 Driving the national narrative from the backseat.

It took two lines toward the end of the Inter-Services Public Relations’ press release for the ruling Pakistan Muslim League (Nawaz) to scurry for cover.

The talk shows that followed the shot fired by the Army chief, Gen. Raheel Sharif, across the bow of the government saw the defense minister meekly trying to defend himself. Two other ministers could also be seen diving for the crawl trench after that somewhat ‘innocuous’ statement.

While the government was recovering from the Army’s warning shot, Pakistan’s media behemoth, The Jang Group, decided, in the wake of a murder attempt on one of its prominent anchors, Hamid Mir, to go on an offensive against the Inter-Services Intelligence directorate and its director-general.

The Geo News screen, the heavy artillery of the group, continued to pound the ISI for hours on April 19. It seemed that Pakistan’s biggest media group had decided to take on the powerful military and its premier intelligence agency where the government had tucked its tail and run.

Initially, while Geo delivered its salvos, there was no return fire from the military. Then it started happening. This is how the story goes.

The military used a three-pronged approach. It coopted rival channels and newspapers to fire back at Geo. Its supporters used Twitter and Facebook in its favor and against Jang/Geo, and the ISI sent an application to the Ministry of Defense seeking redress against the media group’s offensive, asking that Geo News be taken off air by the Pakistan Electronic Media Regulatory Authority (PEMRA).

While the defense ministry processed the application, the other two approaches were kept hot by the military. There was an exponential increase in trolling against Geo on Twitter from patently fake accounts. Facebook pages kept pressing for banning the group and there was enhanced mass-email traffic against the group.

The key strike point of all this activity was to prove that the group took its instructions from hostile external forces, has an agenda set by such forces, and has long been indulging in activities prejudicial to the national interest.

Similar accusations were contained in the ISI application, which was routed through the defense ministry to PEMRA, which has since issued a show-cause notice to the group in keeping with the provisions of its regulatory charter. The ISI application, marked “Secret,” a copy of which is with this scribe, also stressed this point as the reason for banning the group.

However, while the application asked that Geo be taken off air pending the completion of a PEMRA inquiry, that has not happened because PEMRA cannot, under its own rules, do that. Meanwhile, the Geo screen has mysteriously disappeared wholly or partially from some cantonments in the country. An inquiry from the defense ministry revealed that while there is no written directive to this end, officers and jawans in some places might have objected to the airing of an ‘anti-national’ channel. One doesn’t have to put an exclamation sign before the sentence to indicate what it means.

The show-cause notice has its hearing on May 6, when it will be decided if the group will be penalized. The ISI application has called for the cancellation of the group’s license. At the time of writing, the situation seems grim and there is no indication that the military wants to take any prisoners. What does one make of this situation?

Leaving aside the absurdities contained in the accusation that the group is acting on an anti-national agenda, this is yet another episode in the war in this country between the civilians and the military. In fact, the stress on national interest, if such a stress is to be taken seriously, indicates there might be different and competing conceptions of national interest.

The point is that while the military might invoke a certain conception of national interest to bulldoze opposition–which it is known for doing–its desire to remain a dominant player is underpinned by a multiplicity of interests and not some grand, monolithic interest with a capital “I.”

There is a cycle here: it remains dominant because it controls the narrative, but it must continue to control the narrative to remain dominant. Over many years there has also been an osmotic effect with this narrative seeping into other government organs and also sections of society. Ironically, while this narrative is ideological in nature, it is presented as a realist approach, which it is not.

Two things have happened over the years. The military’s capacity for upfront action has reduced (though not fully dissipated) but its desire to retain its dominance has not diminished. Put another way, while the military will refrain from getting into the driver’s seat directly, it nonetheless wants the bus to remain on the course it has charted. The hammer has been replaced with a scalpel, though the hammer option hasn’t entirely gone away. Ten or perhaps 15 years ago, Geo would have faced something more than just a notice. But the military’s constraints in using the direct-fire option have not prevented it from using indirect fire and effectively.

There’s good news in this and bad. The good news is that we do finally have other centers of power which cannot be bulldozed with impunity. The bad news is that we now have a military that is getting adept at playing in a new terrain and has learnt to be nimble-footed.

General Sharif’s signal to the civilian government came just two days ahead of the Corps Commanders conference. It was meant to test the resolve of the civilian government ahead of that conference and it worked very well. On the Geo affair, the military has used the divisions within the media very effectively. In fact, rival channels and newspapers have played the national interest mantra so well that the Army doesn’t have to bang anyone on the head with it any more.

This was easy to do. The undulated ground of Pakistani media has been created by Jang/Geo itself. For long, the group has bludgeoned its rivals. This is payback time for them and what better moment to do it than when the powerful military stands behind Geo’s rivals. If the military manages to get Geo’s license cancelled, these players, up until now no match to Geo, will have a field day.

On the surface this looks like a good strategy. Except, it is not. If the military wins the round against Geo, rival channels will get bigger slices of the market for sure, but the freedom of expression they now have will be reduced to a sliver. They might still thrash everyone under the sun but the military will be off limits. In fact, the more everyone within the civilian enclave is beaten with a stick while the military remains shielded from any criticism, the higher it will sit atop Mount Olympus. Dragging it down and making it answerable to the people for its acts of commission and omission will become that much more difficult.

For anyone interested in righting the civil-military imbalance in this country, that should be bad news. But market share and a sense of schadenfreude to see Jang/Geo bite the dust are likely to be very strong incentives for rival media houses to ignore the long-term consequences of playing ball with the military.

Haider hosts his own talk show on Capital TV. The opinions expressed herein are his own.

it is just Haider’s slanted narrative and nothing else. His bias against the armed forces and ISi is apparent from his vicious attacks on these fine institutions. Journalist like him abuse the freedom of expression. His views are lopsided. No other country can allow this kind of abuse of its defense forces.

Journalist in Pakistan struggled a lot to get this liberty. They should not abuse it. What Geo-Jang group did was highly obnoxious and offensive by all standards. The enactment of vulgar and malicious propaganda went on for hours at a stretch.

This media house has become too powerful and out of control. It has defied all freedom and ethics. Pemra neglected its duties to regulate the conduct of electronic media. There is no excuse for the dereliction of duty. The regulatory body was formed to watch and regulate the activities of the media. It should wake up from slumber and act immediately.

The punitive action must be taken against the barons of Geo group. Its license must be revoked and canceled.No leniency be accorded to it. The media moghuls should pay for their crimes , which are too many and grievous.

The people of Pakistan have spoken and given their verdict against this group. They have taken out rallies and vociferously protested against it. No one can condone their subversive acts. P.M and the President have ensured the freedom of speech for all. But they can not forgive acts of treason. The S.C should take suo motto notice of this malicious transmission.

No one can defend the indefensible actions of Geo. Mr. Haider should give up defending Geo and criticizing other media houses and ARY Channel and Express Channel. Both Channels must be lauded for their role. The Indian lobby has come out in support of Geo Group, that shows where it gets support and funds.

India should stop meddling in our affairs. Journalist like Haider must weigh the evidence before lashing out at ISI. The armed forces and Intelligence agencies do not control any media houses. All of the are allowed to work freely.

This negativity and dragging down of defense forces must end now.