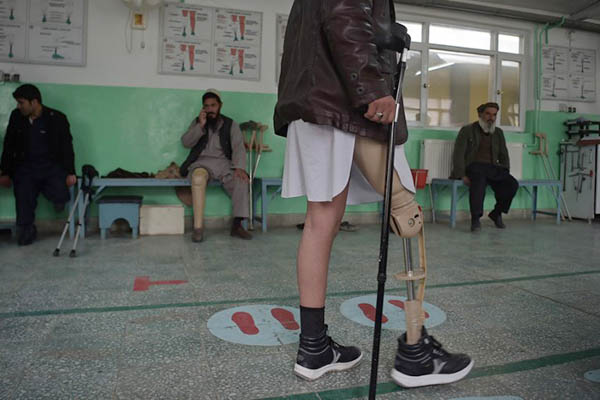 “If committing suicide was not a sin I would have already killed myself,” says Mohammad Alem. For 20 months, the Afghan father has been largely bedridden, paralyzed in a suicide attack in Kabul. Alem, a Supreme Court employee, was traveling with colleagues in a minibus to neighboring Wardak province when the bomber appeared. “Among 16 colleagues, two of us were left alive, all the others have been killed,” he tells AFP. “I am not happy to be alive at all, but I bear all this just for my four kids,” he adds, pointing to the slender white stockings that grip his skinny, inert calves.

For the fourth consecutive year, more than 10,000 civilians were killed or wounded in 2017 in Afghanistan, a U.N. report said on Thursday, victims of conflicts that have now been dragging on for almost 40 years.

It is no longer the fighting but attacks and bombings, often in crowded urban centers, that kill and maim the most often, with nearly 2,300 casualties—22 percent of the total in 2017—coming from such assaults.

Things have not improved so far in 2018, and U.N. officials fear Afghanistan will see “greater harm this year.”

At Alem’s one-room house in the west of Kabul, his four children sit on the red carpet and listen in silence, the youngest climbing on his walker to get closer.

Since his return home, the International Red Cross has ensured Alem has medical equipment and that his family has staple foods. But last year, the promise of a miracle cure led him to India, where a doctor took $10,000 for an injection that did no good.

The government paid him $800 after the bombing and continues to pay his monthly salary of $120. “His wife wanted to sell the house and go back to India for more care, but I told her it was useless. ‘You will lose your house and your money, think of your children’,” says Mohammad Raz, a Red Cross worker who visits the most affected patients.

He himself lost his right arm in a rocket attack when he was 18, during the civil war in Kabul. “More than 20 years later I still dream of me playing football with my two arms, I struggle to accept my disability,” he says, sympathizing with Alem. “I can’t act as a father,” Alem cries. His wife Nadera admits she often cannot sleep for worrying about their children, all under the age of 12.

Economic difficulties are the biggest challenge for the disabled, says Najumudin Helal, director of the Red Cross’s Ali Abad orthopedic center in Kabul, which receives about 1,500 war-wounded per year—80 percent of whom have suffered amputations.

Unemployment is already so high, he says, and the disabled have to accept not only the loss of a limb but also of ways to support their families.

At the center, several young men stomp their prostheses on the floor. Wearing a black velvet cap, Hamid, 17, says he lost his right leg—amputated to the groin—when he stepped on a roadside mine in Wardak.

With it, he says, went all hope of marrying and being able to support a wife and children. But the center itself at least indulges in positive discrimination: some 80 percent of its employees, from reception to the manufacturing of prosthetics, are disabled.