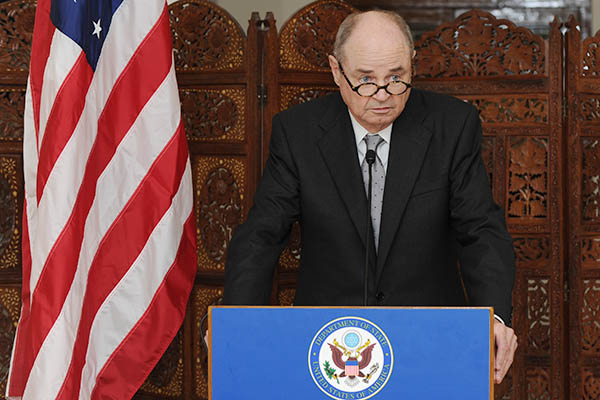 U.S. special envoy on Afghanistan and Pakistan says militants unwilling to engage with anybody right now.

A U.S. envoy said Monday that Washington still hoped to talk directly with the Taliban to support an Afghan peace deal but that the militants seemed unwilling to do so.

The Taliban opened an office in the Qatari capital of Doha in June, with a stated intent to talk to the United States ahead of next year’s withdrawal of most American troops, but diplomacy collapsed before it even began.

“We would still like to see that dialogue initiated, a dialogue that would involve the U.S. and Taliban directly but would also involve the Afghan government or its High Peace Council,” said James Dobbins, the U.S. special representative on Afghanistan and Pakistan. “We’re not giving up hope. We continue to hope that there will be a positive development at some point, but we can’t predict when,” Dobbins, who was expected to lead the U.S. side at talks, told reporters in Washington.

“The Taliban are now, as a practical matter, unwilling to engage with the United States, with the Afghans, with anybody,” he added.

The Taliban office in Doha styled itself as an embassy of a government-in-exile from the Islamists’ 1996-2001 reign, angering Afghan President Hamid Karzai who briefly pulled out of separate talks with the United States on a post-2014 security agreement. In turn, the Taliban refused to talk to Karzai, calling him a U.S. puppet, even though the United States had hoped for the Afghan government to play the main role in talks with the Taliban.

Dobbins blamed a “genuine misunderstanding” over the role of the office.

President Barack Obama has promised the war-weary U.S. public to pull combat troops out of Afghanistan next year, ending the longest running U.S. war that was launched after the September 11, 2001, attacks. The United States has set a goal of concluding the security agreement with the Afghan government next month.

Separately, Dobbins voiced optimism at potential cooperation on Afghanistan between the United States and Iran, which have no diplomatic relations and are at loggerheads over Tehran’s disputed nuclear program.

“If we are able to make real progress on the nuclear agenda, then the opportunities for progress on these other issues (are) definitely there,” Dobbins said. “I think, objectively, Iran and American interests are, if not coincident, at least overlap significantly. Iran has historically wanted a stable, peaceful Afghanistan,” he said.

Dobbins said that Iran opposed the Taliban and had interests in reducing drug trafficking from Afghanistan as well as allowing refugees to return. He also spoke highly of the role of Iranian envoy Mohammad Javad Zarif during talks on Afghanistan’s future in the aftermath of the September 11, 2001 attacks.