Home Latest News ‘Watch as your Loved Ones Die’

‘Watch as your Loved Ones Die’ 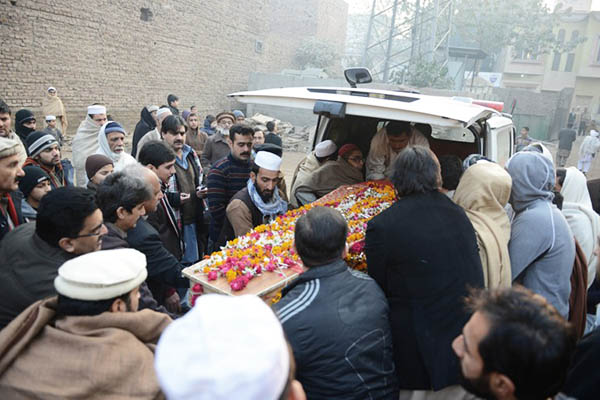 Mourners prepare to bury a coffin in Peshawar. A. Majeed—AFP

Taliban gunmen ‘toyed’ with students in Peshawar before opening fire on them.

Taliban gunmen who stormed the Army Public School in Peshawar toyed with captive students by suggesting some could be let go before lining them up and gunning them down in front of their classmates, according to a new account by survivors.

Militants rampaged through the school and killed at least 141 people on Tuesday, almost all of them children. Pakistan was in mourning Wednesday over the attack, the bloodiest in the nation’s history, which brought international condemnation and promises of a stern crackdown by political and military leaders.

Previous accounts by witnesses have indicated a pattern of indiscriminate firing on students with those fortunate enough to survive playing dead while the attackers moved on. But Shahnawaz Khan, a 14-year-old who was being treated in a Peshawar hospital for two bullet wounds to his shoulder, said the attackers also engaged in sadistic games. He said he and his class were in the middle of English grammar lecture when they heard gunshots, though their teacher said it was a first-aid class and the sound could be coming from a demonstration.

“But after a while the sounds of gunshots grew louder and we were hearing screams of students,” said Khan, the son of a former local government official. “Our teacher opened the door and suddenly rushed back to the room and shouted get under the benches, he was trying to lock the door when someone pushed it from outside and he fell to the ground. Two men wearing Army-like uniforms carrying AK-47s barged into the room and told us not to make any noise and do as they say.”

Khan said the man asked for eight students who wish to be let go to raise their hands, with almost the entire class responding to the call by doing so. “They took eight students of their choice and made them stand in front of the class near the blackboard facing the wall and told us to watch the students,” he continued, as one of gunmen, whom Khan described as burly, forced the class teacher on to a chair. “He told our teacher: ‘Watch as your loved ones die. Ours are also being killed in the same way.’”

The gunmen then opened fire on the children who slumped to the ground, some dead and others writhing and moaning in agony.

Khan continued: “The other guy standing near the door said ‘I want eight more students now so whose turn is it to die first?’ Nobody raised their hands and he tried to grab students and take them in front of the class but the students were grabbing each other tightly refusing to go.”

As the students struggled, Khan said one gunman turned to the other and told him they should leave because they could hear troops arriving. “Then they started spraying bullets on us indiscriminately and left, I got two bullets on my shoulder. I took my tie and tried to stop my bleeding but I fell unconscious,” said Khan, adding that he awoke on a hospital bed and did not know how many others had survived.

His account was confirmed by the class teacher, who also survived and was being treated in the same hospital for bullet wounds to his shoulder and chest. “I wanted to help them but I was helpless,” the 46-year-old who did not wish to be named said as he wept.

TTP spokesman Muhammad Khorasani claimed the school attack as revenge for a military offensive against militant strongholds, saying they wanted the Army to “feel the pain” they had felt at losing loved ones.

i strongly condem the attack on peshawar school. As far my point of view is concerned it is strongly seems that it is india ‘s terrorist attack.

December 16, 2014: In a single operation by the Pakistani army in its North West — acting as mercenaries for the Americans against their own people — a year or so ago the number of displaced people was two or three million — killing large numbers of children — and that is the kind of provocation under which the Taliban were acting in today’s massacre of the army’s school children. India’s wall-to-wall TV coverage mentions everything but makes no mention of the United States which is the root cause of so-called terrorism since these people do not have nuclear weapons — the ultimate terror weapon — to defend against the United States — the ultimate terrorist entity. Religious extremism — such as against women’s education — is needed to mobilize people for defense against the United States. The Indian government similarly acts as mercenaries for the Americans.

This incident wrote a history in cruality and told us how far an evil human mind can go in wildness.Although ALLAHA already promised such dogs the bad levels of hell but I also wish May ALLAHA fire those dogs like people both in this world and in hell, Ameen, suma Ameen