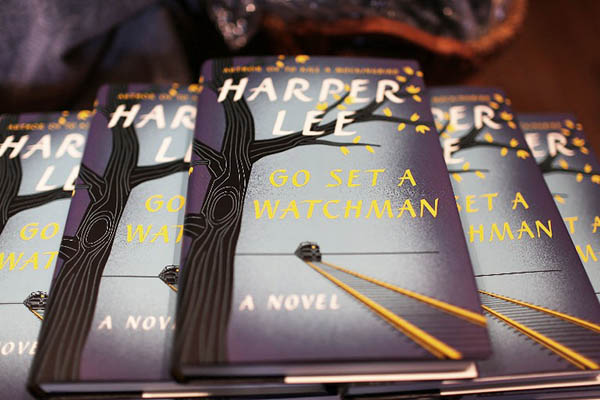 Harper Lee’s novel Go Set a Watchman set a record for first-day sales in the adult fiction category at Barnes and Noble, the largest U.S. bookstore chain announced on Wednesday.

Barnes and Noble said the previous record was held by Dan Brown for his 2009 bestseller The Lost Symbol, which is to be made into a film expected to star Tom Hanks. Watchman also surpassed E. L. James’ latest mommy-porn erotica Grey: Fifty Shades of Grey as Told by Christian, which came out last month, as the company’s number one bestseller. It is on track to be the bestselling book of 2015, but when asked by AFP how many copies were sold, Barnes and Noble said it was company policy not to break out sales figures.

The global release of Watchman on Tuesday was one of the biggest events in modern publishing history, more than half a century after her classic To Kill a Mockingbird made its debut.

Pre-orders made it an immediate bestseller for Barnes and Noble, as well as for online retailer Amazon, after its forthcoming release was announced by publishers HarperCollins in February. Sales for Lee’s first novel have since doubled and Mockingbird is now the number two bestselling book, Barnes and Noble added.

Mockingbird is considered a 20th century classic that defined racial injustice in the Depression-era South of the United States and became standard reading in classrooms across the world. The literary world was upended when HarperCollins announced it was publishing a second novel from Lee, seemingly discovered in her safe deposit box in still-unclear circumstances.

Lee wrote the manuscript in the late 1950s, but her then-editor suggested she recast the book from the childhood perspective of Scout, which in turn became Mockingbird. While some reviews are charitable about plotting Lee’s development as a writer, others have been scathing about the unedited draft, set in the era of the civil rights movement.