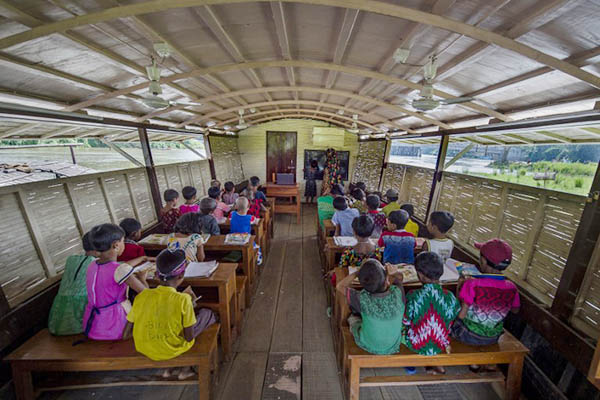 Mosammat Rekha’s older cousins grew up unable to read and write, their tiny village so frequently cut off from the nearest school by floods that would rise suddenly in their remote corner of disaster-prone Bangladesh. But seven-year-old Mosammat is learning her ABCs aboard a boat fitted with a classroom and play equipment that is helping children thrive even as climate change alters the world around them.

“We can attend classes even during the rainy season, when our homes are barely above water,” the seven-year-old told AFP aboard the vessel in Chalan Beel, some 175 kilometers northwest of Dhaka.

Climate change is already taking its toll across Bangladesh, a densely populated and impoverished country the United Nations has identified as among the most vulnerable to a warming planet. Millions in the low-lying nation are being forced to adapt to overflowing rivers, rising seas and increasingly extreme weather in a country frequented by destructive storms and cyclones.

Twenty million people there could be made “climate refugees” by the end of the century, a U.N. panel has warned, turfed out of their homes as rivers swallow towns and seas encroach on coastal communities.

In villages like Kalidaskhali on the banks of the Padma River, these forces are already reshaping lives by the hour. As much as five meters of riverbank can disappear in a single day, consuming everything in its path, local government official Azizul Azam told AFP.

More than 9,000 people have been displaced by the Padma in just five years, as the main tributary of the Ganges encroaches further and further inland. “Today my backyard is gone. I had a cowshed over there… now it is just water,” said Rukaiya Khatun, watching helplessly as chunks of earth disappeared into the turbid water inching towards her home. “The Padma has devoured everything.”

A warming planet has made monsoon rainfall more unpredictable across Bangladesh and melted Himalayan glaciers to the north, turbocharging the waterways that crisscross the country. Many have struggled to adapt as the river has turned, in the words of one villager, “wild and furious.”

But elsewhere, local ingenuity is finding ways around the turbulent and unpredictable forces of nature. Students at BRAC University in Dhaka last month unveiled a model for a floating bamboo home, one that could survive a flood or be easily relocated elsewhere in case of inundation.

In Chalan Beel, floating schools chug along rivers and lakes swollen by floods, bringing education to students long denied a chance to learn in one of Bangladesh’s poorest locations.

“Now, they have year-round education,” said Mohammad Rezwan, head of the Shidhulai Swanirvar Sangstha charity that runs the pioneering project.

Today they run more than 20 “floating schools” in the Chalan Beel area. Other charities have replicated the idea in different parts of Bangladesh, where the world’s largest river delta empties into the Bay of Bengal.

Children even learn to use laptop computers, all powered by banks of solar panels atop the boats. At night, once school is over, adults come aboard to learn new techniques for farming in an extreme climate.

Rezwan said farmers were being taught how to plant flood-resistant crops in floating seed beds, a possible lifeline for rural communities who can lose a year’s harvest when the waters suddenly rise.

Bangladesh has invested more than $400 million into a new special agency for adaptation projects, including flood embankments, floating farm technology and mobile water-purification stations. “It shows how seriously we are taking this,” said Mukhlesur Rahman Sarker, deputy chief of the government’s Bangladesh Climate Change Trust, of the new fund.

Simple local innovations have changed lives in a generation in Chalan Beel.

Mosammat Jharna, a mother of two, spent her youth hemmed in on all sides by water as unpredictable storm surges and fast-rising floods made walking to the nearest school impossible. She now beams at the floating school anchored near her home—a symbol of hope for her children, no matter how the landscape changes in the future.

“My dream of educating my children, including my daughter, has come true,” she said. “I don’t want to see them end up illiterate like me.”