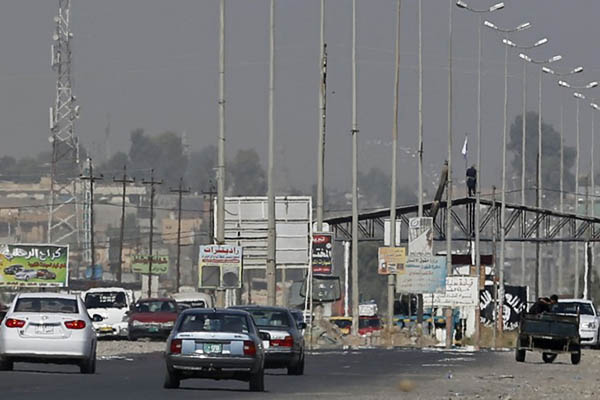 Iraqi city that was taken over by jihadists six months ago is suffering from lack of clean medicine and shortage of medicine.

When Islamic State group fighters swept into northern Iraq’s second city Mosul in a lightning June offensive, their propaganda trumpeted a better life for the people under jihadist rule. Now, nearly six months later, residents there are suffering from a lack of clean water and also a shortage of medicine to treat illnesses caused by it.

The very name “Islamic State” is a clear pointer that the group seeks to rule as well as to conquer: I.S. has declared a cross-border Islamic “caliphate” spanning parts of Iraq and neighboring Syria. But despite spearheading the June offensive that also overran the surrounding Nineveh province and swathes of other territory, I.S. has been unable to provide basic services in these areas, ultimately undermining the state to which it aspires.

“The impression given in I.S. propaganda is a group offering a better quality of life than before that is also more just for locals,” said Aymenn al-Tamimi, a fellow at the Middle East Forum who is an expert on jihadist organizations. But “the hardships of the locals certainly undermine I.S. claims to be a state meeting the needs of the people and offering them real security,” he added.

One resident of east Mosul whose wife became ill because of contaminated water told AFP by telephone that the “disruption of the water treatment stations” had led to sickness among many people. “The biggest and most dangerous problem now is because of our harsh circumstances and the absence of services,” said Abu Ali. Some people have even turned to digging their own wells to get water because of interruptions in the mains supply, which Abu Ali said could be cut for a day or even a week.

Problems with basic services already existed in much of Iraq before this year’s crisis erupted, but they have been compounded in Mosul by skilled government employees fleeing jihadist rule. “Treatment stations are old and the water distribution networks are damaged,” a water treatment official in Mosul said, adding that there was now a shortage of workers as well.

At Mosul General Hospital, one doctor said the facility had admitted 15 people infected by contaminated water in just 24 hours—and there are nine other hospitals in the city. A doctor at Republican Hospital said it too had received a large number of people, especially children, who had become sick, and that stomach and intestinal infections and hepatitis were on the rise.

As the number of ill people increases, there is a corresponding shortage of medicine available to treat them. One official in the Nineveh provincial health department said stocks of drugs were running low and the Nineveh Pharmaceutical Company had stopped operating.

“Communication with government institutions has been cut and we have not received any budget to allow the provision of the medicines we need,” the official said.

Umm Mohammed, a resident of west Mosul who brought her 10-year-old son to Republican Hospital for treatment, said: “There is a major shortage of medicine needed to treat these sick people. The roads are closed and Mosul has turned into a big prison that we can’t leave.” Expensive private pharmacies are now the only option, she said, asking: “How will the poor get medicine?”

A 29-year-old woman living in southern Mosul brought her daughter Shaima in to Mosul General for treatment. “My daughter has not stopped crying and suffering from stomach pains” since the day before, she said. For now, there would appear to be little immediate hope of the problem being resolved.

While Iraq’s army and allied forces are engaged in an anti-I.S. offensive, the key cities of Mosul, Tikrit and Fallujah remain in jihadist hands. And while Kurdish forces and elite federal forces have battled I.S. in Nineveh province, they would have to make significant advances to pose a credible threat to the militants holding Mosul.