Home Lightbox We Are Malala 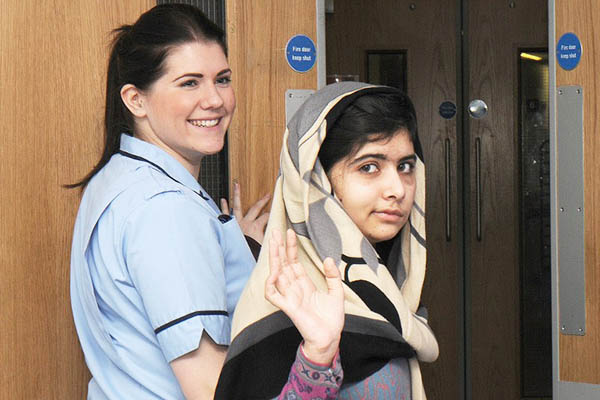 Schooling girls is, of course, imperative.

My 8-year-old granddaughter, Amy, has a picture of Malala Yousafzai in her bedroom in New Jersey. It is on a table piled high with her favorite books: Misty of Chincoteague, Black Beauty, King of the Wind. Amy is crazy about horses, Justin Bieber—and reading. She is also indignant, furious actually, about what happened to Malala on that school bus in Swat Valley. “How can they shoot a girl just because she wants to read?” Amy says, her eyes flashing. “It makes me really, really mad.”

Amy is not alone, of course. The shots that ripped through Malala were heard around a horrified world. There were protest marches, candlelight vigils, and ceremonial honors for the gravely-wounded teenager. The “I Am Malala” petition launched by Gordon Brown, special envoy for the U.N.’s Global Education Initiative, became a favorite on all my friends’ “walls,” and would have, I’m sure, on Amy’s if her parents had allowed her to have a Facebook page. Hundreds of thousands of people signed the petition. We Are All Malala.

The good news is that Malala is recovering. There is good news as well that more and more young girls like her in Pakistan, certainly in cities like Lahore, are learning to read and write. The bad news is that 32 million girls worldwide still don’t have access to schools, 3 million of them in Pakistan. What a waste. The benefits of educating young women are a no-brainer. Study after study shows that educated women increase family incomes; marry later; have fewer children; have healthier children and send them to school. In non-study parlance, this means that women are, and want to be, vital contributors to their family incomes and to their country’s economic viability and social stability. Veiled or unveiled, rural or urban, girls are the future. Just teach them to read and write.

It’s been over 20 years since I was last in Pakistan. I was working then with Benazir Bhutto on her memoir, Daughter of Destiny. She was not yet the prime minister, but a political dissident determined to end military rule and return democracy to Pakistan. Just think how different the history of Pakistan would have been if her parents had kept her ignorant, educated her brothers but not her, and married her off to a landowning cousin. Would there even be a Pakistan Peoples Party?

Benazir was very, very lucky to have wealthy, enlightened parents. To his great credit, Zulfikar Ali Bhutto did not treat his daughters any differently from his sons. Bhutto could afford to send them all to the best schools, but he laid down conditions. He demanded that they all do well in their studies and called them when he was away to make sure they were doing their homework. He didn’t even give them time off when they got home from school. Every afternoon tutors came to the family home for additional lessons in math and English, followed by a maulvi who gave them religious instruction.

Bhutto was especially demanding of Benazir, his first-born, and even sent her a reading list from Sahiwal prison in 1968 where he was being held in solitary confinement for challenging the country’s military dictator and president, Ayub Khan. “Read about Napoleon Bonaparte, the most complete man of modern history. Read about the American Revolution and about Abraham Lincoln. Read Ten Days That Shook the World by John Reed. Read about Bismarck and Lenin, Ataturk and Mao Tse-tung. Read the history of India from ancient times. And above all read the history of Islam,” read the prison form.

Bhutto’s expectations of Benazir may have set a high bar, though he was not alone. Malala’s father, in his way, seems to have just as high expectations of his daughter. But just as violent and tragic events shaped Benazir’s life and thrust her into politics, the same are shaping Malala’s. Benazir planned to go into Pakistan’s Foreign Service, not politics, until her father’s overthrow and assassination. Malala wanted to be a doctor until the Taliban started burning down girls’ schools in Swat and her hometown of Mingora became a battlefield. “I have a new dream,” she says in a video. “I must be a politician to save this country. There are so many crises in our country. I want to remove these crises.” Her inspiration, she said, is Benazir Bhutto.

I feel privileged to be part of the Lahore Literary Festival, to be surrounded by female writers and male writers, to be speaking in front of an audience of both men and women who appreciate literature. We will all be enriched by each other, stimulated by new ideas and awed by the talents of so many. Malala would love to be here. So would Benazir. Amy would, too—if all the books were about horses.

Francke, a former Newsweek editor, is the author of On the Road with Francis of Assisi. From our March 1 & 8, 2013 issue.