Home Latest News ‘We Are Not Killers’

‘We Are Not Killers’ 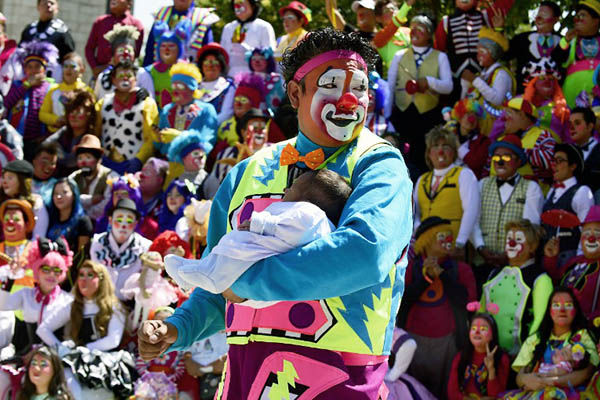 Clowns from across Latin America meeting at an annual convention this week in Mexico City took a break from comedy to deliver a serious message: “We are clowns, not killers!”

Some 200 of them in full clown suits and makeup chanted those words as they took a group picture outside a theater on Wednesday to counter the “creepy clown” craze that has swept across the United States, Europe and now Mexico.

Creepy clown sightings in more than a dozen U.S. states in past weeks have caused a wave of hysteria, forcing police and schools to scramble to contain spreading jitters. Last weekend in Mexico, five teenagers dressed as clowns were detained in the northern border city of Mexicali after they frightened people with bats. Five others were detained in the central city of Queretaro after police received complaints due to their “diabolical” clown costumes.

For those who attended the 21st International Clown Convention in the Mexican capital this week, the fad is no laughing matter. “I don’t see anything funny about it,” said Emanuel Emiliano Fernandez, an Argentine clown who goes by “Fluorescent Plug” and wears giant trousers. “Clowns make people laugh and happy,” he said. “It’s not just painting your face.”

“If you saw me in the street, what would you do?” he asked as he crossed his eyes, opened his mouth in an “O” shape and tilted his head.

Ana Gonzalez, a Costa Rican clown known as “Koketina,” believes the hysteria inspired a menacing comment under one of her photos on Facebook. “Shoot when you see one of them,” said the message.

“I immediately deleted the person, who was not a friend,” Gonzalez said.

Tomas Morales, president of the Brotherhood of Latino Clowns, said the craze could be dangerous. “If [people] see in the news that we are evil, they can take a machete or a gun and kill a clown,” Morales said, urging the media “not to invent cases of clowns that cause terror.”

Roger Jara, a Chilean publicist wearing a red wig, a hat with squares and enormous shoes, said Latin Americans “are like sponges that absorb other customs,” like the scary clown craze. “They try to scare with those teeth and terrifying eyes. It’s much different to put on the costume, wear it in your heart, because for us it’s a vocation,” said Jara, or “Little Pine Nut.”

For Roberto Lema, an Ecuadoran psychologist and clown known as “Chavita,” the people dressing up to scare others are seeking “cyber fame” through social media. “There’s bad information that you will become a millionaire if you have a certain number of ‘likes’ or visits to your video,” he said as he arrived at a dressing room to put on his costume. But “Little Pine Nut” believes the sightings on social media are a marketing strategy ahead of the release of a remake of It, a movie based on U.S. author Stephen King’s book of the same name featuring a malevolent clown.