‘We Cannot Afford to Fail’ 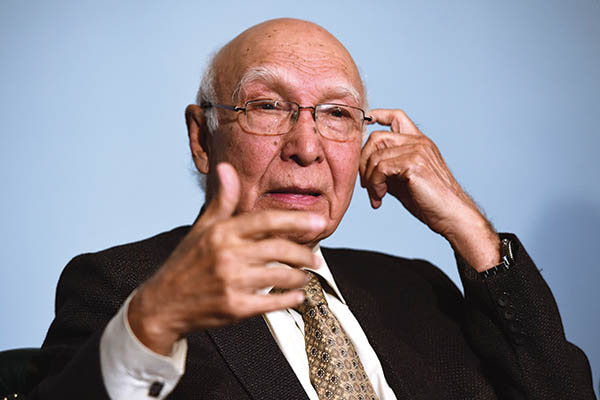 Q&A with the chair of the Committee on FATA Reforms.

As chairman of the five-member committee set up to recommend proposals for the mainstreaming of the restive and backward Federally Administered Tribal Areas, Sartaj Aziz, adviser to the prime minister on foreign affairs, knows that failure is not an option. We spoke with him in Islamabad recently about his committee’s work and recommendations, which the federal cabinet approved on March 2. Excerpts:

What’s the makeup of your committee and how did it work?

It includes the governor of Khyber-Pakhtunkhwa, the minister for states and frontier regions, the law minister, and the national-security adviser. It was constituted in November 2015 and, over eight months, met with all stakeholders—tribal elders, jirgas, representatives of political parties, civil society leaders, traders, journalists—to come up with proposals for the political mainstreaming of the tribal areas.

Why did past efforts at reforms fail?

This happened largely due to the concentration of all power in the hands of the political agents and the absence of major legal reforms. The security situation had also been very fragile. Regional wars and the resultant destruction of infrastructure and related facilities could never be fixed. If the Naseerullah Babar-led committee’s proposals had been enacted ahead of the 1977 elections, had the coup not happened, FATA would not have become the “most dangerous area in the world.” There have been several notable attempts at reforms since then. The 2005 Justice Ajmal-led committee made recommendations on rolling back the Frontier Crimes Regulations, 1901, and some of these were implemented six years later. But more than anything, none of the attempts at reforms or integration was based on complete, comprehensive legislation for thoughtful and sustainable change. Past attempts actually only addressed some aspects without looking at the overall situation. We concluded early on that the tribal areas could no longer be retained as a buffer against foreign aggression. They must be fully integrated within the Constitutional framework.

Tribal-belt reforms have been considered for the past 40 years. Will they finally work this time?

We carried out in-depth studies of all previous attempts to determine why those failed. Reforms have been a requirement for Pakistan long before the tribal areas became a global concern. Implementation is not going to be smooth because, apart from the inherent complexity of this multidimensional process, there are vested interests who want the status quo to continue. We took every segment of society onboard, including political parties which participated in our conferences and seminars, and the Pakistan Army, which will provide security until the police is trained up. Its Frontier Works Organization and National Logistics Cell are already contributing toward the development of the region. Timing is also important. Mainstreaming was part of the Pakistan Muslim League (Nawaz)’s 2013 election manifesto as well as the 2006 Charter of Democracy. The success of military operation Zarb-e-Azb allowed rehabilitation and reconstruction in North Waziristan, South Waziristan, and Orakzai. This was a minimum requirement; these areas had to be ready for reforms. It was only after this that Prime Minister Nawaz Sharif formed the committee. He is very clear that FATA’s integration will be good for the people in these areas, for Pakistan, and for the region.

Some of your allies have expressed reservations about the merger of the tribal areas with Khyber-Pakhtunkhwa.

The committee carefully examined various options, including making FATA a separate province. This was found to be unfeasible given the fact that the seven agencies aren’t closely connected with each other; they aren’t even linked by road. Each agency has its own entrance through different districts of Khyber-Pakhtunkhwa: for example, you can only get to North Waziristan from Bannu and to South Waziristan from Tank. Each agency is economically and culturally tied to adjoining provincial districts, though. So a merger is the most practical way forward. FATA does not have the financial resources or administrative capacity to become a separate province. Despite our extensive process of consultations, there were demands from some for a referendum, but that isn’t politically advisable.

What’s your take on the challenge to the merger by about 100 tribal elders at the Supreme Court?

It would be inappropriate to comment on a sub judice matter. The committee has conducted itself in accordance with the Constitution and solicited and received inputs from all stakeholders. The overwhelming majority supports our efforts. This cannot be a sustainable, fruitful exercise without buy-in from all stakeholders. The committee reached out to everyone—through seminars, conferences, meetings, advertisements, a toll-free national hotline. Mainstreaming involves legal, administrative, and security aspects. It’s going to be a complex process. History will not forgive us if we fail to implement these recommendations.

The demand to replace this pre-Independence set of laws has been longstanding. The people of FATA want, however, for the traditional Riwaj system of jirgas to continue, because they feel the regular justice system is time consuming, expensive, and corrupt. The committee has proposed a blended system. The Frontier Crimes Regulations will be abolished, the Riwaj system will continue for local dispute resolution but its verdicts can be appealed at the High Court and Supreme Court. Under the proposed system, the jirga will be convened by an agency judge, not the political agent. The new Riwaj system will be consistent with the fundamental rights enshrined in our Constitution. We plan to move three bills in the National Assembly to abolish the Frontier Crimes Regulations, merge the tribal belt with Khyber-Pakhtunkhwa, and have tribal  areas’ representatives elected directly to the Khyber-Pakhtunkhwa Assembly. The democratic empowerment and inclusion of the people of FATA will guarantee that the process of development is not impaired or impeded.

How do we rebuild the terror-ravaged region and foster a sense of inclusion?

Everyone from Prime Minister Sharif down knows how difficult it has been for Pakistanis in the tribal areas. This is why the 10-year development program is being proposed with an annual additional outlay of about Rs. 90 billion or so from the divisible pool, which means all four provinces will contribute their share toward developing the tribal agencies. This budget will go toward infrastructure development—roads, schools, hospitals, security. The extension of the provincial boundary up to the border with Afghanistan is a major strategic revision and requires investment in security infrastructure, including human capital. The recent inauguration of the Kurram Tangi Dam in North Waziristan is just one example of what the government plans to do to visibly develop the agencies for the sustenance of locals and their long-term security and dignity. The area is also being primed for connectivity with the China-Pakistan Economic Corridor. The federal cabinet’s approval of our committee’s recommendations was widely hailed in the tribal areas as well as across the provinces. Peace and prosperity here will mean peace and prosperity nationwide, so we cannot afford to fail.

the usa will fall thanks to sites like this….may you rot