‘We Can’t Afford Any More Escalation’ 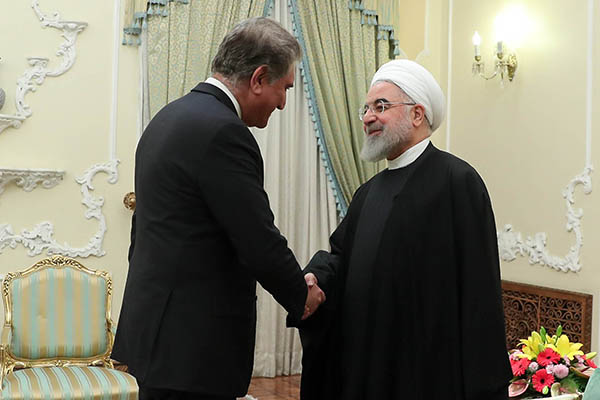 Pakistan’s foreign minister urges Iran officials to resolve issues with U.S. through diplomacy, vows Islamabad will not join any war

Currently on a two-nation visit to Iran and Saudi Arabia on the instructions of Prime Minister Imran Khan, Qureshi has been tasked to push for peace amid an ongoing fear of a war between Washington and Tehran following America’s assassination of Iranian commander Qassem Soleimani last week. During their meeting Qureshi and Rouhani discussed tensions between the U.S. and Iran, regional peace and Pak-Iran ties.

Qureshi urged Rouhani to pursue diplomatic means to reduce tensions and resolve all issues amicably. He hailed recent statements from Iran over the tensions as a positive sign, saying these aligned with Pakistan’s desire to see a peaceful regional atmosphere. Tehran has said that it does not want any conflict with Washington, but would not hesitate to respond to any aggression from America.

Since the start of the Middle East crisis, Pakistan’s foreign minister has reached out to his counterparts in various countries and urged them to help negotiate peace. He apprised the Iranian president of his conversations and reiterated Islamabad’s principled stance of refusing to join any other country’s war. However, he added, Islamabad would continue to play a role for the establishment of peace in the region.

Qureshi also thanked Iranian Supreme Leader Ayatollah Ali Khamenei and the Iranian president on behalf of Prime Minister Khan for raising their voice against the Indian atrocities in India-held and supporting Pakistan’s efforts to highlight the plight of Kashmiris. The Iranian president lauded Pakistan’s peace-building efforts, and clarified that Iran did not want to increase regional tensions.