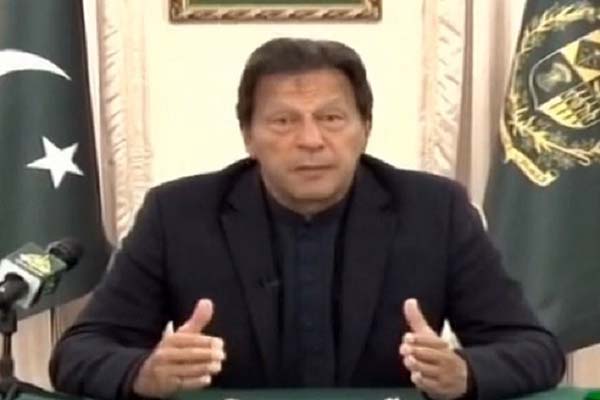 In televised address, Pakistan’s P.M. rules out lockdown, offers little in way of support apart from calls not to panic

Reiterating his catchphrase of ‘ghabrana nahin hai’ (no need to panic), Prime Minister Imran Khan on Tuesday bluntly told Pakistanis that there is no stopping COVID-19 from spreading in the country, adding that the country is too poor to afford mass lockdowns.

“I want to tell all of you, this virus will spread,” Khan said in a nationally televised address, his first on COVID-19 since it appeared in Pakistan on Feb. 26. He said that he felt compelled to address the situation as he was seeing “panic” spreading in the country over the spread of the virus.

According to Khan, the government started considering mass lockdowns once the total number of confirmed cases rose to 20—now at 235—but opted against it, as “Pakistan’s [economic] situation is not the same as that of the United States or Europe.” The prime minister said around 25 percent of our people live in extreme poverty and risked dying of hunger in case of a sustained shutdown—implying it is far better to die of coronavirus than poverty.

Khan said the national economy is recovering from a “very difficult time” and so the government had decided to close all places where large gatherings of people occur, including schools and athletic events. However, his timeline is a bit suspect, as the government refused to ban attendance at PSL matches until last week—nearly a month after the first case of the virus was reported in the country on Feb. 26.

The prime minister said that while the novel coronavirus spreads very quickly, 97 percent of all cases make a full recovery, with a majority of infected exhibiting only mild “flu-like” symptoms. However, he noted, there was a risk of those who fall critically ill inundating healthcare facilities and leading to deaths. He said the government had been in contact with the Chinese and Iranian governments following outbreaks there and lauded the Balochistan government and the Pakistan Army for their efforts to quarantine Pakistani pilgrims who returned from Iran.

It is that failed quarantine that is emerging as the epicenter of the outbreak in Pakistan, with retesting by provincial governments finding how badly mismanaged it was, as more and more of the pilgrims test positive for COVID-19. Noticeably ignored in the P.M.’s praise was the Sindh government, which has been widely hailed as posting the best response to the pandemic, finding cases of the coronavirus among patients that had been cleared by the much-vaunted screening measures implemented by the federal government at international airports.

According to Khan, the government decided to take action to deal with the disease on Jan. 15, after it was feared that infections would enter Pakistan from China. Screenings were started at airports, he said, and around 900,000 people had been screened thus far. Latest research has found most of the infected do not show any symptoms—as stated by the prime minister as well—and these screening measures are insufficient to identify them without proper testing. These patients are nonetheless highly infectious and can spread the disease among the entire population.

The prime minister said a meeting of the National Security Committee was called after 20 cases had emerged in Pakistan, and it studied responses of various countries to fight the virus. Instead of initiating a national lockdown to curb the spread of the disease, he said, the government decided to ban public gatherings, closed education institutions and formed a national coordination committee.

Khan said the government had allocated funds to the National Disaster Management Authority and tasked it with importing necessary medical equipment from abroad, including ventilators, of which a shortage was sensed if the cases of the virus continued to rise.

According to Khan, a third committee would assess the economic impacts of the virus on the country and suggest helpful measures to prevent a slide into economic recession. He said the government would also talk to the International Monetary Fund to find relief for industries and exporters. Protecting the businesses throughout bailouts and relief measures, it was implied, is far more important than ensuring basic food is provided to the impoverished in case of a required lockdown to halt the spread of the disease.

P.M. Khan said the government would also ensure no inflation or profiteering takes places in Pakistan during the coronavirus threat. “There will be a severe reaction from the government against you,” he warned anyone found hoarding essentials.

Finally, the prime minister issued a list of guidelines that the masses should adopt to protect themselves against the coronavirus. “We have to win this war as a nation,” he said, after earlier suggesting the government was helpless to prevent it from taking root in the country.

Self-isolate if you have returned from abroad

Globally, over 7,900 have died of COVID-19, with more than 198,000 infected. The epicenter of the disease has shifted from China, where it originated late last year, to Europe, where it is currently prompting governments to initiate lockdowns in a bid to halt its spread.