Home Scope ‘We Could Become another Pakistan’

‘We Could Become another Pakistan’ 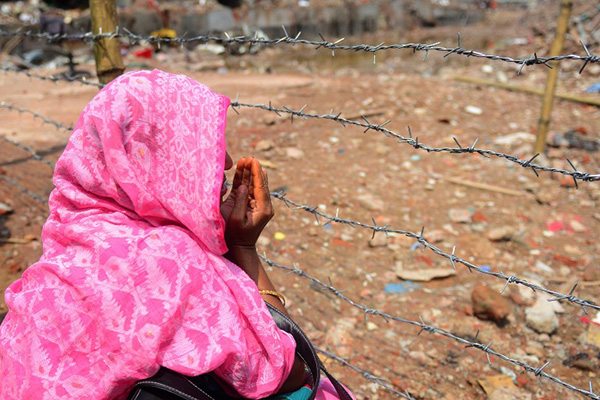 A series of protests and one of the worst factory disasters in history have brought Bangladesh to a crossroads.

With its disaster-strewn garment industry in turmoil and strikes paralyzing the country on a near weekly basis, Bangladesh is in danger of unraveling its hard-won progress.

One of Asia’s standout performers of late, Bangladesh has posted average annual growth rates of 6.2 percent since 2003, and its poverty rate has fallen by approximately 2 percentage points.

But analysts say the combined fallout from a factory disaster last month that killed 1,127 people and the deadliest political unrest since independence from Pakistan in 1971 could scare off investors and reverse much of that progress.

Most shops and businesses were closed Tuesday in the latest of a series of strikes called by opposition parties, furious at the push to prosecute Islamists for war crimes dating back more than four decades. But the shutdown of Dhaka’s Ashulia industrial zone, which forms the hub of the garment industry, threatens to run much longer, with managers announcing on Monday that unrest among workers had prompted an indefinite closure.

In a sign of the growing apprehension, the ratings agency Moody’s put Bangladesh on notice last week, stating “the strikes and factory disasters are credit negative.” Even before the collapse of the Rana Plaza factory complex, the International Monetary Fund said last month that growth this year would fall below 6 percent.

The garment industry has long been the main driver of the economy but the April 24 catastrophe was only the latest in a series of disasters, including a fire in November that killed 111 workers.

Bangladesh became the world’s second-largest clothes maker after China last year and the $20 billion industry accounts for 80 percent of annual exports. But its shocking safety record has led some fashion labels to warn they could move their business elsewhere. Disney has already departed. The growing clamor for workers to be paid more than the basic $38 a month also threatens one of Bangladesh’s main attractions—its cheap labor costs.

“Production disruptions have already had a number of international buyers considering sourcing production from other countries in the region such as Vietnam or Cambodia, even at higher cost,” said Ifty Islam, head of the Dhaka-based Asian Tiger Capital Partners investment fund. “The Rana Plaza tragedy has reinforced that effect with reputational damage adding to supply uncertainties.” Islam warned the stream of strikes had already “adversely affected the economy” and they are expected to become more frequent in the countdown to elections next year.

Bangladesh won independence in 1971 after a bloody liberation war against Islamabad. Its early struggles, which included a string of coups and devastating natural disasters, led then-U.S. secretary of state Henry Kissinger to brand Bangladesh a “bottomless basket case.” The relative stability of the last two decades has enabled Bangladesh to thrive at a time when Pakistan has been in near constant crisis.

However recent mass protests calling for a new blasphemy law and against the war crimes trials—the largest in decades—has prompted warnings that Bangladesh could meet the same fate.

“It’s a very ominous sign for the economy,” said Ahsan H. Mansur, former head of the IMF’s Middle East division. “In the worst-case scenario, we could become another Pakistan,” he added, noting that Pakistan enjoyed growth rates of 8 percent in the 1980s and that its garment sector was bigger than Bangladesh’s only a decade ago. “If political hostilities continue, the situation may lead to the emergence of extremist underground forces, leading to an economic situation like in Pakistan.”

Mass protests organized by the hardline group Hefajat-e-Islam led to 38 deaths earlier this month. As well as a blasphemy law, its demands include provisions for the death penalty and a ban on mixing of males and females in public places, leading to comparisons with the Taliban in Afghanistan and Pakistan.

More than 100 people were killed earlier in the year in clashes involving supporters of the largest Islamic party, Jamaat-e-Islami, over the conviction of its leaders for war crimes back in 1971. The street protests have received backing from Khaleda Zia, leader of the main opposition Bangladesh Nationalist Party whose poisonous rivalry with Prime Minister Sheikh Hasina Wajed shows no sign of abating.

A lull in hostilities after the Rana Plaza disaster lasted only days and Zia has infuriated Wajed by allying her secular party so strongly to the Islamists.

Business leaders are looking on in despair. “It is a hopeless situation,” said Anwar-ul-Alam Parvez, former head of the Bangladesh Garment Manufacturers Association. “We’re in an existential crisis, yet our leaders are still bickering.”