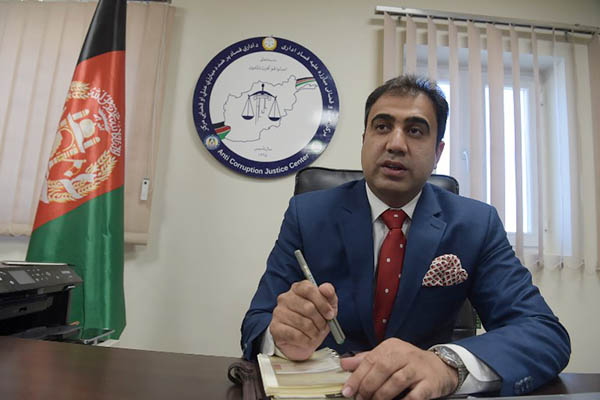 A series of deadly attacks on Afghan anti-corruption officials has highlighted the dangers of taking on the country’s rich and powerful and sparked calls for better protection of the people waging war against graft.

Three police investigators have been murdered in the year since Afghanistan’s Anti-Corruption Justice Center (ACJC) began public hearings of high-level cases in Kabul. Earlier this month another investigator was wounded after being shot in the face, and a senior employee was attacked outside his home, ACJC officials told AFP, in what are suspected to be targeted assaults.

No one has been arrested over the attacks, which critics say expose flaws in the security provided to the people tasked with punishing corruption—an issue President Ashraf Ghani has made a priority.

“Unfortunately we are not secure, we are not living in secure places, the commute is not safe and even in the ACJC we don’t feel safe,” Chief Judge Anisa Rasooli told AFP at her office inside the ACJC compound on the edge of the Afghan capital. “We are working on very high-profile cases and facing very dangerous people.”

Afghanistan is one of the most corrupt countries in the world, according to Transparency International, with graft permeating nearly every public institution, including the military. The anti-corruption center was established in June 2016 but, more than a year on, gaping holes remain in efforts to protect its officers.

Every day, staff make the dangerous commute to work from their homes scattered around the capital, which is infested with kidnapping gangs and frequently targeted by insurgents. Rasooli is one of two chief judges driven in armored vehicles that have been loaned to the ACJC by the Supreme Court—vehicles that will eventually have to be returned.

Everyone else at the ACJC—including judges, prosecutors and investigators—are transported in “soft-skin” police pickups or other vehicles.

Some staff drive their own cars or use public transport, officials said, putting them at even greater risk.

Following the killings of the first two police investigators, Ghani issued a decree in June ordering 50 security personnel from the VIP protection unit to be assigned to the anti-corruption center, according to a copy of the document seen by AFP. The decree also required the interior ministry and intelligence service to “seriously protect and cover the security of ACJC staff homes” and provide “armored vehicles” to those facing “high security threats.”

But Rasooli, who has received threats on her phone and in court, and other senior staff told AFP they have no protection at night because they do not have facilities at their homes for the guards. “I don’t have space for them to stay,” said executive director Rohullah Abed, who sends the three guards assigned to protect him 24 hours a day to their homes in the evenings.

Abed said neither of the orders on residential protection and armored vehicles had been fulfilled. The interior ministry has been described by Ghani as the “heart of corruption” in Afghanistan’s security sector.

While a secure residential compound for ACJC staff and their families was under construction, Abed said it would take another year to complete. As for the commute, interior ministry spokesman Najib Danish told AFP “police guards and police vehicles” had been supplied to the center.

The defense ministry contacted the ACJC this week indicating that four armored and 10 soft-skin vehicles would be made available “in the coming weeks,” Abed said. “The government has made these promises several times … but little has been done,” said Sayed Ikram Afzali, executive director of Afghan advocacy group Integrity Watch. “Until they really do something we can’t believe them.”

ACJC officials are not the only ones in danger. Corruption whistleblowers also risk their lives. A veteran nursing teacher in the northern city of Mazar-i-Sharif who had accused the provincial public health director of graft was shot dead on Thursday, a source with knowledge of the case told AFP.

The ACJC handles cases involving high-ranking public officials accused of bribery of at least five million afghanis (around $74,000), or embezzlement of 10 million afghanis or more. But the judicial process is slow, Afzali said.

“The ACJC is seriously under resourced. Maybe they want the ACJC to be weak so they can control it or it could be just incompetence,” Afzali told AFP.

ACJC data show 15 cases have been finalized with 74 people jailed, six fined and 13 acquitted, but Afzali said “there are a lot of other cases that are still pending.”

Rasooli and her fellow Chief Judge Shir Aaqa Monib said the ACJC was making a difference and they remained committed. “It seems that, especially the Ministry of Interior and the Ministry of Defense, they are now frightened and scared,” Rasooli said.

Monib said: “All the problems that we have in Afghanistan are the result of corruption. If we don’t stand against this then who is going to do it?”