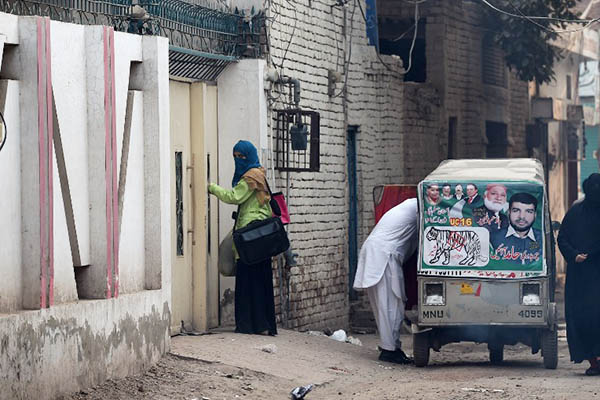 Pakistani relatives of female California shooter say she was a devout Muslim who kept to herself, and rarely interacted with fellow students.

Estranged relatives of a Pakistani woman involved in a mass shooting in California spoke Sunday of their shame at her crimes, as former classmates and teachers painted a picture of a quiet, religiously conservative student.

Tashfeen Malik, 29, and her husband Syed Farook, 28, gunned down 14 people at a social services center in San Bernardino, an act praised by the Islamic State group who hailed the couple as “soldiers” of its self-proclaimed caliphate.

According to her uncle Malik Ahmed Ali Aulakh, who is a former provincial minister, Tashfeen was born in the village of Karor Lal Esan in Punjab province but moved to Saudi Arabia around 1989.

Tashfeen’s father Gulzar Malik, an engineer, had grown distant from his family and “he never came back even to attend the marriages of close relatives,” added Aulakh. “We are ashamed and shocked about this act done by our niece—why did she do something so gruesome? We can’t believe it,” he said. Malik Omar Ali Aulakh, another of her uncles, added: “We have not kept in touch with Gulzar’s family and he avoided contacting us.”

A Pakistani intelligence agent told AFP they had conducted a search Saturday of a second family home in Multan, but found nothing of interest. An AFP reporter at the scene Sunday afternoon saw a woman wearing a black burqa and green sweater leaving the pink-and-white two-storey house located in a middle-class neighborhood with a bearded man, both carrying luggage. “This woman was part of Gulzar Ahmed Malik’s family and the man with her was her maternal uncle. They were living in this house and now they have gone somewhere. I don’t know where have they gone,” said Zulfiqar, a resident of the area.

The southern region of Punjab from which Tashfeen hailed has long been associated with Sufism, a mystical form of Islam whose adherents worship with song and dance, attend shrines and devote themselves to historic saints—practices viewed as heretical by more orthodox Muslims.

Indeed, according to Mohammad Jamil, a neighbor of Tashfeen’s father, one of her uncles himself was a Sufi devotional singer. “We don’t want Muslims to do such things. Such people should be punished, must be punished,” said Jamil of Tashfeen, adding: “She has dishonored Pakistan.”

It is still not clear where or when Tashfeen became radicalized, but by the time she returned to Pakistan in 2007 to pursue a degree in pharmacology at the Bahauddin Zakariya University that lasted till 2013, she was devoutly religious and wore a veil, according to former instructors. “She was not outspoken or ultra-modern but she was religious minded, polite and submissive,” said Dr. Khalid Hussain Janbaz, chair of the pharmacy department.

A fellow student who requested anonymity told AFP that Malik lived in university accommodation for two years before moving into a house with her mother and another sister, also a student. “She would often watch religious TV programs and attended religious lectures,” the student said, adding that Malik remained in touch with some of her friends via Facebook, and told one that she was pregnant.

“She preferred to remain in veil or burqa throughout her stay in the university and provided veiled pictures for all her university documents,” said the student.

Pakistan’s government on Sunday issued a statement condemning the attack, even as its interior minister said Islamabad could not be held responsible. “We have contacted the U.S. government and assured them we will provide them whatever legal assistance possible, if asked,” Chaudhry Nisar Ali Khan told reporters in Islamabad. But, he added: “A country or a national or a religion cannot be held responsible for a crime committed by an individual and I appreciate a wise approach adopted by the U.S. administration on the issue.”