Home Lightbox ‘We Must Not Forget’

‘We Must Not Forget’ 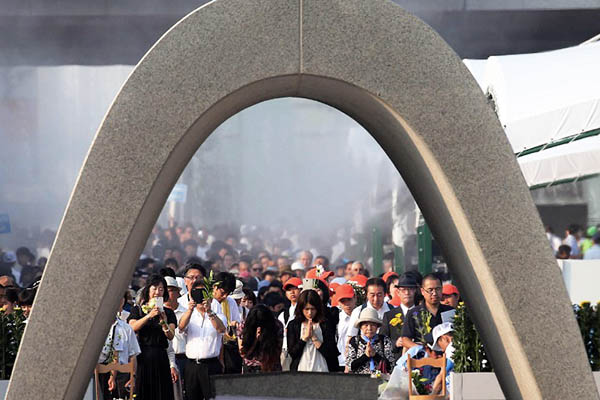 Charred bodies bobbed in the brackish waters that flowed through Hiroshima 70 years ago this week, after a once-vibrant Japanese city was consumed by the searing heat of the world’s first nuclear attack.

The smell of burned flesh filled the air as scores of survivors with severe burns dived into rivers to escape the inferno. Countless hundreds never emerged, pushed under the surface by the mass of desperate humanity.

“It was a white, silvery flash,” Sunao Tsuboi, 90, said of the moment when the United States unleashed what was then the most destructive weapon ever produced. “I don’t know why I survived and lived this long,” said Tsuboi. “The more I think about it… the more painful it becomes to recall.”

Seven decades since the attack, the city of 1.2 million people is once again thriving as a commercial hub, but the scars of the bombing—physical and emotional—still remain.

It was 8:15 a.m. on Aug. 6, 1945 when a B-29 bomber called Enola Gay flying high over the city released Little Boy, a uranium bomb with a destructive force equivalent to 16 kilotons of TNT. Just 43 seconds later, when it was 600 meters from the ground, it erupted into a blistering fireball burning at a million degrees Celsius. Nearly everything around it was incinerated, with the ground level hit by a wall of heat up to 4,000 degrees Celsius—hot enough to melt steel.

Stone buildings survived, but bore the shadows of anything—or anyone—that was charred in front of them. Gusts of around 1.5 kilometers a second roared outwards carrying with them shattered debris, and packing enough force to rip limbs and organs from bodies.

The air pressure suddenly dropped due to the blast, crushing those on the ground, and an ominous mushroom cloud rose, towering 16 kilometers above the city. About 140,000 people are estimated to have been killed in the attack, including those who survived the bombing itself but died soon afterwards due to severe radiation exposure.

Tsuboi, then a college student, was about 1.2 kilometers from the hypocenter and was literally blown away by the blast and blinding heat. When he picked himself up, his shirt, trousers and skin flapped from his burned body; blood vessels dangled from open wounds and part of his ears were missing.

Tsuboi remembers seeing a teenage girl with her right eyeball hanging from her face. Nearby, a woman grasped at her torso in a futile attempt to stop her intestines from falling through a gaping hole.

“There were bodies all over the place,” he said. “Ones with no limbs, all charred. I said to myself: ‘Are they human?’”

Many died of their terrible injuries over the following hours and days; lying where they fell, desperate for help that would never come, or even just for a sip of water.

For those that survived, there was the terrifying unknown of radiation sickness still to come. Gums bled, teeth fell out, hair came off in clumps; there were cancers, premature births, malformed babies and sudden deaths.

As tales of the new, unknown illness spread through the war-ravaged country, survivors were shunned out of fear they might bring infection. For years afterwards, many found it difficult to get jobs, or to marry.

Even today, 70 years on, some hibakusha (nuclear survivors) avoid talking openly about their experience for fear of discrimination.

Hiroshima mayor Kazumi Matsui, 62, whose mother survived the bombing, said he has only recently begun discussing the personal effects of the attack. “I know personally how a single bomb changed many people’s lives,” said Matsui, a father of four and grandfather of six.

Three days after Hiroshima, the U.S. military dropped a plutonium bomb on the port city of Nagasaki, killing some 74,000 people. The twin bombings dealt the final blows to imperial Japan, which surrendered on Aug. 15, 1945, bringing an end to World War II.

Supporters of the bombings say that while the toll of the attacks was high, they ultimately saved people because they helped to avert a ground invasion that some forecast would cost millions of lives. But the bombs’ terrible destruction had a curious side effect on history, offering Japan a new self-narrative in place of the expansionist aggressor that was the cause of the Pacific War.

“When talking about Hiroshima and Nagasaki, there is tendency for Japanese people to identify themselves as victims” of the global conflict, said Masafumi Takubo, Japanese nuclear expert.

Political leaders in the rebuilt cities of Hiroshima and Nagasaki have long campaigned for global nuclear disarmament—a role Frank von Hippel, a nuclear arms control expert at Princeton University says is vital. A global “taboo” about the use of atomic bombs has protected the world since Hiroshima and Nagasaki, he said.

“We have come a long way, I think. We cannot give up on nuclear disarmament. The danger is too great,” said von Hippel, a former White House official. “The atomic bomb should never have been dropped, it should never even have existed,” said Keiko Ogura, who as an eight-year-old was blown into the middle of the street and knocked out by the Hiroshima blast.

As for Tsuboi, he hopes to see a day when the world’s leaders, including a serving U.S. president, visit his city to hear for themselves what it was like under the mushroom cloud. He does not want an apology, he says, he just wants to make sure it never happens again. “We must not forget,” Tsuboi said.