Home Latest News ‘We Will Get it Done’

‘We Will Get it Done’ 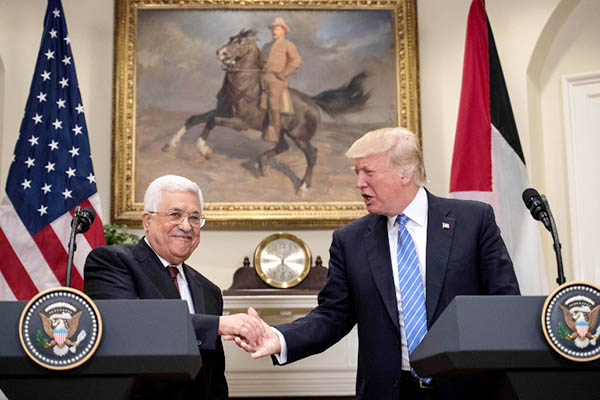 U.S. President Donald Trump confidently predicted that a Middle East peace agreement was within grasp on Wednesday, as he hosted Palestinian leader Mahmud Abbas at the White House.

“We will get it done,” Trump said, flaunting his deal-making prowess during a first meeting with the veteran Palestinian leader that marked the start of an ambitious—some say quixotic—presidential effort.

Brushing aside the complexities of a decades-old conflict that has bedeviled successive U.S. leaders, Trump told Abbas that together with the Israelis they could bag “the toughest deal to make.”

“It is something that I think is frankly, maybe not as difficult as people have thought over the years,” Trump said, exuding his trademark bravado.

“We believe that we can… be true partners to you to bring about a historic peace under your stewardship.” But there was also a hint of the thicket that awaits the neophyte U.S. president.

“Mr. President, it’s about time for Israel to end its occupation of our people and our lands,” Abbas said, listing demands that the current Israeli government has baulked at. Among them, the right of return for Palestinians to lands currently held by Israel and the establishment of a Palestinian state with its capital in East Jerusalem and based on 1967 borders.

The two men’s upbeat tone contrasted sharply with that of veteran Middle East watchers. According to former White House official Dennis Ross, the gap between Israelis and Palestinians “has probably never been greater.”

“As someone who’s worked on this for the last 30 years, I don’t think we’ve ever been at a lower point,” he said ahead of the meeting.

Trump’s long-shot effort to bring Middle East peace got off to a rocky start when he appeared to back away from supporting a Palestinian state and vowed to move the U.S. embassy to Jerusalem, breaking two tenets of American policy held for decades. But receiving Prime Minister Benjamin Netanyahu at the White House early in his term, Trump also showed he was willing to press Israel on West Bank settlement building, a longstanding concern of Palestinians and much of the world.

On Wednesday, Trump offered no prescriptions for what a deal should look like, only saying that he would play the role of “a mediator, or an arbitrator, or a facilitator.”

“Any agreement cannot be imposed by the United States, or by any other nation,” Trump said.

During his four months in office, Trump has struggled to translate his skill in achieving business deals into effective governance. Efforts to overhaul health care, the tax system and government spending have faltered, despite Trump’s Republican party controlling not only the White House but both houses of Congress.

Hady Amr, who had three decades of Middle East experience before working on the peace process full time for secretary of state John Kerry, told AFP that Trump’s Middle East push could similarly falter. “When I was put into this job 24/7, three a half years ago,” Amr said, it was even more complex than he had thought. “I hope I’m wrong, but I think that the president will discover, as he discovered about health care, that there is a reason it hasn’t been solved.”

Abbas also makes an unlikely dealmaker. He made the trip to Washington while politically unpopular back home, with polls suggesting most Palestinians want him to resign. His term was meant to expire in 2009, but he has remained in office with no elections held.

Palestinians are watching closely, including the leader of the radical Hamas movement Khaled Meshaal, who called on Trump to break with past approaches to Middle East peace. “This is a historic opportunity to pressure Israel… to find an equitable solution for the Palestinian people,” he told CNN.

Hamas on Tuesday released a policy document that for the first time indicates a willingness to accept the idea of a Palestinian state within the borders that emerged after the 1967 Arab-Israeli war, although it stops short of recognizing Israel. But Abbas will be encouraged that Trump did not publicly demand that the Palestinians cut funding to prisoners and their families. That could pose major domestic political headaches for Abbas, as he battles unpopularity and challenges from rival factions.

“Mr. President, I affirm to you that we are raising our youth, our children, our grandchildren on a culture of peace,” Abbas said.