Home Latest News ‘We Will Have None of It’

‘We Will Have None of It’ 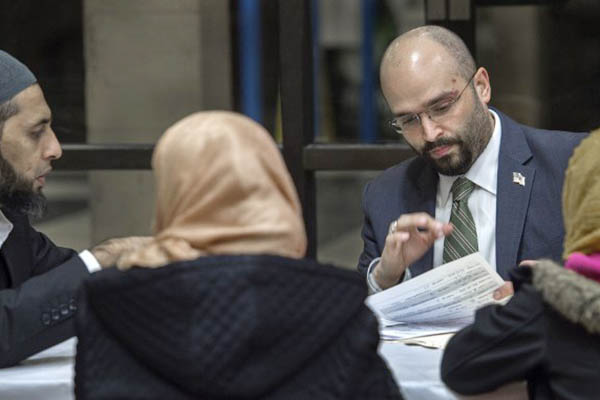 While fearful about rising Islamophobia under Trump administration, Muslims in the U.S. are also optimistic about demonstrations drawing people of all faiths.

In a sprawling banquet hall, Ahmed Rehab walked to a lectern facing a glittering group of diners and launched into a searing speech excoriating the Donald Trump administration.

“This fight is not just our fight, it is America’s fight,” Rehab told the packed room of 1,200 attendees—mostly American Muslims at a fundraiser for the Chicago chapter of the Council on American Islamic Relations (CAIR), which Rehab heads. “As you look at those who are trying to ban good people from coming to this country,” Rehab continued, “people who’ve committed no crime whatsoever other than in their minds the crime of being Muslim… we will have none of it.”

The room broke into applause.

The president’s efforts to institute a ban on travelers from certain Muslim-majority countries have been met with a strong response from Muslim Americans and their supporters. But there is also fear that Islamophobia is on the rise, and that the Trump administration may still target Muslims.

“There’s a real dread of what’s coming next, what’s going to happen, who will be targeted,” said Louise Cainkar, president of the Arab American Studies Association, and author of a book that examined how Arab and Muslim Americans were affected by policies following the September 11 attacks. “There’s a sense that they’re going to once again go after civic organizations, possibly survey mosques, things that have been done in the past,” she said.

What is different now, she said, is that Muslim and Arab groups have established ties with other communities—and demonstrations against Trump’s rhetoric now draw a mix of people from various faiths and backgrounds. “This is new, and this is really energizing people,” she said.

At the banquet hall, those listening to Rehab’s speech had mixed reactions—some concerned, others optimistic because of the sense of cooperation with outside groups. “My kids are all American citizens,” explained Fraheen Hashmi, a 36-year-old pharmacist with four young children. “It’s just scary to raise them in this environment,” she said, worried that they might grow up embarrassed of their heritage or afraid to identify as Muslim.

Zayna Saadeh was worried, too. The 59-year-old Palestinian immigrant has lived in the United States for 40 years. But now, she keeps the front door of her clothing store locked for fear of xenophobic attacks. She unlocks only when someone rings the doorbell. “We’re not stranger(s),” in the United States she said, but “that’s how we feel a lot of times right now.”

Advocacy groups have reported a sharp rise in hate crimes. Anti-Muslim groups nearly tripled last year, according to an annual census by the Southern Poverty Law Center. And in 2015, hate crimes against Muslims increased 67 percent, according to the FBI.

Those numbers may be going up, amid increasing reports of new incidents.

Last month, an arson fire damaged a Florida mosque, and a Kansas man was accused of shooting two Indian immigrants who he perceived as Middle Easterners, killing one. This week, the Islamic Center of Tucson reported that a vandal had scattered ripped up copies of the Quran, Islam’s holy text, around the mosque.

But there has also been a rallying response from Muslim groups and supporters, as Muslim-Americans have felt more scrutiny and threats. During his speech at the banquet hall, Rehab pointed to new allies in the room—non-Muslim lawyers who helped travelers during Trump’s ill-fated first attempt at a ban that triggered chaos at American airports until it was halted by U.S. courts. “My friends, you are the best of America,” he said. Other attendees echoed that optimism.

“The negative could be turned into a positive, and I think that’s what we’re seeing now,” said Akif Ali, a 36-year-old born in Houston. “The best part is that the American public themselves have become very generous to us,” added Saqib Khan, a U.S.-born lawyer of Pakistani descent.

One evidence of the growing support was a gathering at Chicago’s Grace Place Episcopal Church, where about 30 people—many community activists for various other causes—attended a presentation billed as a teach-in about Islamophobia.

Sofia Sami, dressed in the traditional Muslim head covering known as the hijab, stepped in front of a projection screen to help lead the group. They watched samples of news coverage, discussed their own perceptions, and considered ways rhetoric shapes policies.

Two hours later as people cleared out, Sami reflected on how American politics are changing. “A lot of people who aren’t Muslims are watching the news and seeking ways to support,” said the 24-year-old first generation American of Indian descent.

CAIR, Rehab’s group, has expanded its capacity in Chicago to take on hundreds of new volunteers, grown its network of schools, mosques and community centers and held know-your-rights training sessions. “These are definitely times that are rapidly mobilizing the Muslim community, or co-strugglers of color and allies,” said CAIR spokeswoman Hoda Katebi.