Home Scope ‘We Will Never Bow Our Heads’

‘We Will Never Bow Our Heads’ 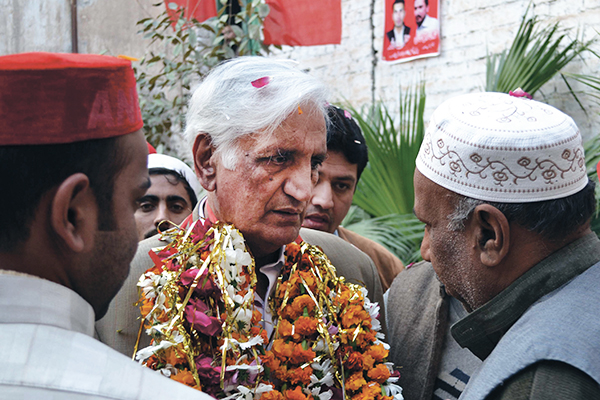 Bashir Bilour, hours before he was assassinated. AFP

“The age of Allah-o-Akbar is over,” Bashir Ahmed Bilour had declared to a gathering of lawyers in Peshawar last year in June. “It is now the age of science and technology.” At his funeral service in the Khyber-Pakhtunkhwa capital on Sunday, these very words—“God is Great”—boomed across the city’s Sher Khan Shaheed stadium as shocked and angry congregants paid their last respects to the assassinated politician.

Bilour, 69, was killed in a suicide bombing on the evening of Dec. 22 as he left a gathering of some 100 members of his Awami National Party—which runs the provincial government—in Peshawar’s Qissa Khwani bazaar. Eight others, including a senior police official, are dead, and over 15 injured. The senior minister had been targeted twice before by the Taliban: in November 2008 when the closing ceremony of an interprovincial sports competition was bombed, and in March 2009 while he was surveying progress on his government’s roads project. On Saturday, the wounded Bilour, shrapnel in his chest and abdomen, was rushed to hospital, but couldn’t be saved. This was the first high-profile political assassination since the Taliban mowed down federal minorities minister Shahbaz Bhatti in Islamabad last year.

The militants were quick to claim responsibility for Bilour’s murder. “Our men targeted the rally of ANP as they are our declared enemies,” said Tehreek-e-Taliban spokesman Ihsanullah Ihsan. “We are fighting a war to establish the Islamic system in this country, while the ANP is promoting secularism. Our main target was Bashir Bilour.” Ihsan said Bilour was targeted to avenge the killing of Sheikh Naseeb Khan, a cleric connected to the religio-political party Jamiat Ulema-e-Islam (Sami-ul-Haq) and who preached at the same madrassah in Akora Khattak where several high-profile Taliban leaders, including Mullah Omar, had been indoctrinated.

Under seemingly constant threat, Bilour had been asked to increase his security detail but he waved off these concerns, ignoring advice by traveling to the insurgency-wracked federally-administered tribal areas and being the first to visit bombed sites to express solidarity with rescue workers. Bilour’s resolve to stamp out militants was unflappable and unvarnished. He didn’t believe in appeasement or in the doublespeak niceties required for self-preservation. Ten days before his assassination, Bilour visited a site where the Taliban had attacked police. “These Taliban attacks will not weaken the government’s commitment to combat the militancy,” he said. “We will never bow our heads before them.”

The assassination of his younger brother must have struck Ghulam Ahmed Bilour at many levels. The federal railways minister was alongside Bashir Bilour at the Peshawar gathering on Saturday. “Bashir never bowed his head before the terrorists,” says the older Bilour. “It was his style to live with dignity and pride. Fear had no meaning for him. Seeing the way he embraced martyrdom, I wish to be killed like him.” That is unlikely. After the railways minister announced a bounty of $100,000 for the head of ‘Sam Bacile,’ the man behind this year’s blasphemous YouTube video, in a moment of calculated appeasement—which was especially shocking coming from an ANP stalwart—the Taliban announced amnesty for him. “Our pardon for Ghulam Ahmed Bilour will remain,” spokesman Ihsan has confirmed.

The Bilours’ party and the Karachi-based Muttahida Qaumi Movement are the only two remaining political organizations which remain true to their secular ideals. After being attacked by militants, President Asif Ali Zardari’s Pakistan Peoples Party utters only sotto voce support for Jinnah’s vision of a Muslim—not Islamic—state. Even after the attempt on party chief Asfandyar Wali Khan’s life in 2008 (the shock from which left him unable to speak for days) and the 2010 attack which killed the province’s information minister Mian Iftikhar Hussain’s only son, the ANP, like the younger Bilour, never bowed. Since coming into power in the province and joining the ruling coalition in Islamabad in 2008, the party has been attacked mercilessly, losing 560 workers, including three members of Parliament, to suicide attacks.

Bilour, a lawyer by training, was the second-highest ranking official in the ANP-led provincial government. When Asfandyar Wali Khan’s father was alive, Bilour was one of his most trusted and effective lieutenants. He even served as acting president of the party at least twice. Bilour won elections five times in a row—from 1990 to 2008. Last year, he was conferred a national honor for his stance against terrorism. He is survived by two sons and three daughters.

Bilour’s assassination foreshadows the carnage that will certainly trail politicians as they gear up for general elections, which are expected in May. But far from forcing the ANP into retreat, his death has renewed their resolve to fight on, heads unbowed.

“The time has come for decisive action, at the national level, against those who have challenged the writ of the government and established safe havens,” ANP’s Bushra Gohar, a member of the National Assembly, told Newsweek. “We have to expose these elements. The time for apologies is over. We need to adopt a clear-cut policy.” Information minister Hussain has demanded a military operation in North Waziristan, ground zero for the Al Qaeda and Taliban syndicate. “Let there be no difference between good Taliban and bad Taliban,” he said, rejecting the longstanding belief that some militants can be won over.

On Monday, the province’s chief minister, Ameer Haider Khan Hoti, stood up in the Assembly and pointed to Bilour’s empty chair. “We have two options,” he said, “either we stand firm against the terrorists or we hand over our land to them. If the terrorists can unite, why can’t we?” If courageous Bilour’s death can unite the country and remind Pakistanis once again that there can be no copouts in this war, his memory will have been well served. For now, it’s too soon to tell.