Home Latest News ‘We Will Not Take Responsibility’ 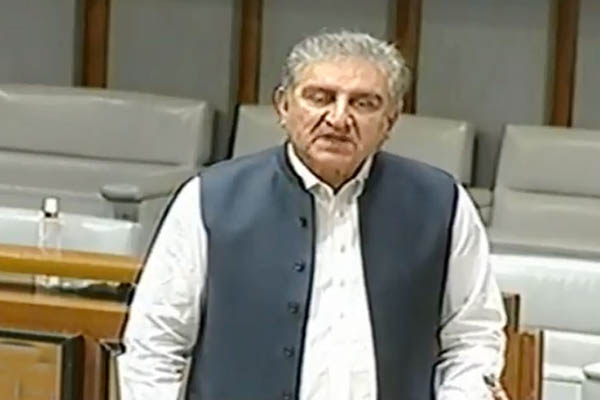 Foreign Minister Shah Mehmood Qureshi on Monday made it clear that Pakistan will not take any responsibility for a potential failure of the ongoing Afghanistan peace process, stressing that Islamabad has been “honest and sincere” in its desire for stability in the neighboring state.

“It [peace] is a shared responsibility and nobody is going to buy it anymore that if things go wrong Pakistan is responsible. We will not take responsibility,” he said while addressing the inaugural session of the Pak-Afghan Bilateral Dialogue in Islamabad. Pakistan was “honest and sincere” in its desire for peace in Afghanistan, he said. “We have been accused enough,” he added.

Referring to reports of Afghan President Ashraf Ghani planning a trip to Washington “soon,” he noted that this should not be an opportunity to launch a new “blame game” in the region. “I wish them luck and a good visit but let me spell it out in advance: If the objective of going to Washington is starting a new blame game and holding Pakistan responsible for all the ills [in Afghanistan] and the lack of [progress in the peace] process, then it will not help,” he said.

The foreign minister stressed that Afghan nationals must decide the way forward for their country. “Afghanistan needs leadership that can negotiate a successful outcome; that can transit this country into peace and is not worried about perpetuation, hanging on to power,” he said, adding that Islamabad desired a partnership with Afghanistan and other regional powers to combat terrorism. Pakistan, he recalled, had paid a heavy price in its fight against terrorism, highlighting the loss to lives and property at the height of the insurgence in Afghanistan.

“I, as the elected representative of Pakistan, do not want to see ‘Talibanization’ of Pakistan. How can I be more clear than that?” he said, stressing that this vision for the country was based on the values repeatedly advocated by Quaid-e-Azam Mohammad Ali Jinnah.

The foreign minister also clarified that Pakistan had been clear that it would not interfere in the internal affairs of Afghanistan. “We have no favorites,” he said, admitting there was a perception that Islamabad backed the Taliban insurgents. “I am not and I don’t represent them, I represent Pakistan. Taliban are Afghans,” he said, adding that Afghan leaders of every ethnic group had been invited to Islamabad to make it clear that Pakistan wished to engage with all stakeholders who backed peace and reconciliation.

“That is why we have been inviting you and will continue to invite your leadership to achieve our common objective of peace and stability,” he told the participants of the bilateral dialogue. However, he warned, “time is running out.” He urged the Afghan leadership to elect leaders they believed in, adding that both the elected and Taliban leaderships should show some flexibility in the pursuit of lasting peace.

Qureshi recalled that Prime Minister Imran Khan had been stressing for several years that there was no military solution to the Afghan conflict, adding that the rest of the world was now also recognizing that a negotiated settlement was required. He claimed he had seen a very “positive” change in the U.S. on this position. “Today in the U.S. we are looking at Pakistan not as part of the problem but part of the solution,” he quoted U.S. Senator Lindsey Graham as telling him, claiming this was a “paradigm shift.”

Qureshi concluded his speech by reiterating his calls for an end to any blame game between Pakistan and Afghanistan. There was a need to “forget the past and look to the future,” he said, adding that a peaceful and stable Afghanistan was in Pakistan’s interest.

A day earlier, addressing media in Multan, the foreign minister accused the previous government led by the Pakistan Muslim League (Nawaz) for “mishandling” the issue of convicted Indian spy Kulbhushan Jadhav, claiming a recent law granting him the right to appeal his death sentence was in line with demands of the International Court of Justice.

“We have taken steps to implement the directive of the International Court of Justice. India wants Pakistan to deny consular access to Kulbhushan Jadhav so that it could have grounds to go to the ICJ. The opposition should not show ignorance by making statements in this regard. It should avoid strengthening the Indian point of view,” he said.

He rejected a view that PTI leader Jahangir Tareen had been granted clemency in an ongoing accountability probe, claiming he had the right to prove his innocence. He also reiterated that Pakistan would not permit the U.S. to operate any military bases in Pakistan.