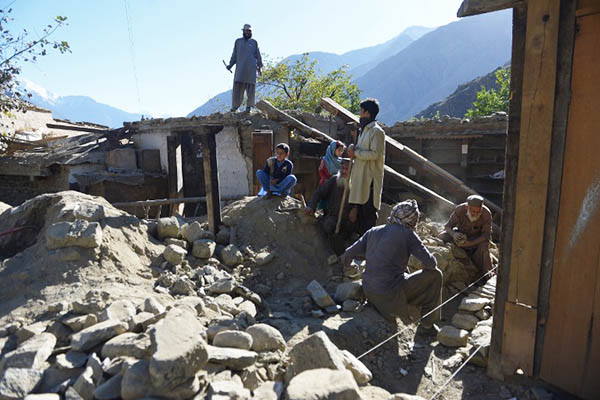 Quake survivors turn to each other for help, claiming no government or NGO has offered any aid thus far.

Digging through the rubble of an earthquake less than three months after being devastated by floods, residents of Chitral cannot afford to wait for government help. With temperatures already plummeting as winter fast approaches, there is no time to delay.

Sleeping under the sky at night and relying on food from neighbors, they are helping each other to rebuild in the wake of Monday’s powerful 7.5 magnitude tremor, which ripped across Afghanistan and Pakistan and killed 370 people.

“Children are forced to sleep under the open sky in the cold weather,” said Kesu village resident Islah-ud-Din on Wednesday. “But nobody has arrived to help them,” he said, adding that their misery is unlikely to be over soon with winter just around the corner. “We won’t wait for authorities to come,” said 29-year-old driver Lal Jan. “People here are helping each other… people whose houses survived in the quake provide food and shelter to those who are affected. We all are helping each other to clear rubble from our houses.”

Weeks of heavy rain caused havoc in the area in July, killing at least 38 people in Khyber-Pakhtunkhwa province of which Chitral is a part. Thousands were evacuated and dozens of roads and bridges in Chitral were swept away.

Then came the tremor. Once again Khyber-Pakhtunkhwa has emerged as the worst hit province, though the scale of the devastation in Chitral is only just becoming clear. Of the 180 houses in his village of Langa, 70 were completely destroyed and many others damaged, local councilor Jamshed Alam told AFP.

“No government support has arrived so far, neither has any NGO approached us,” the 35-year-old said. “The local government started its survey to assess damage only yesterday, and nothing else. People are trying to help themselves recover. Many people, whose houses were destroyed or became too risky to live in, sleep under the open sky in the night. They have nothing to cook and eat and are relying on the food provided by neighbors and fellow villagers.”

In Chitral city most people had already managed to repair their partially damaged homes, but in the surrounding rural areas many were still clearing rubble. Even houses that survived the jolt developed cracks.

Islah-ud-Din sees himself as one of the lucky ones. He was in his shop when the quake hit but rushed outside. “As soon as I got out, I heard a huge bang and then there was dust everywhere. After 10 minutes when the dust cleared, I saw both of my shops had been flattened and my father was crying sitting beside me.”

His house, however, survived intact.

Jan the driver, the only breadwinner for his family of 10, had a four-room house, which collapsed. “Now we have nothing to eat, cook, wear or sleep because all our kitchen items, clothes and bedding have been buried under the rubble.”