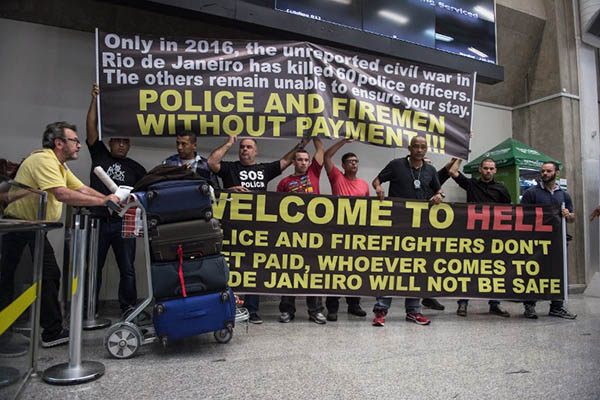 The protest by more than 100 emergency services workers, including firefighters, took place in the arrival hall at Galeao International Airport, which will be a key entry point for the expected half-million tourists to the Games starting Aug. 5.

Officers held up a banner reading: “Welcome to hell. Police and firefighters don’t get paid, whoever comes to Rio de Janeiro will not be safe.”

Mannequins dressed in uniform were laid out on the floor to represent the more than 50 officers killed in Rio de Janeiro so far this year. A female officer with fake blood smeared on her face and hands clutched a mannequin dressed in a T-shirt reading “SOS policia.”

“We are here to show citizens and tourists from abroad the realities of Brazil,” said veteran police officer Alexander Neto, 56. “They’ve been conned and we too have been conned. You have to understand there is no public security.”

Rio police began staging street protests, including another at the airport, last week, saying that they have not been fully paid for months as Rio state hovers on the edge of bankruptcy. An emergency federal bailout received last week started to be paid out Monday, local news reports said, with the government beginning to meet delayed commitments to emergency services workers, teachers, hospital staff and prison administrators.

Rio is set to become the first South American city in history to host the Olympics. However, there are growing fears about the ability of police to control crime during the event. Murders in the first quarter of 2016 are up 15 percent on the same period last year.

Non-lethal crimes such as street robberies are also on the rise, highlighted by the hijacking on Friday of a truck carrying some $445,000 worth of television equipment to be used for Olympics news coverage.

David Cervantes, a Colombian tourist who came across the airport protest on arrival in Rio, said he was shocked. “It’s not the best welcome we could get from Rio de Janeiro, which has the reputation of being such a wonderful city,” he said. “I’m not quite sure what to think.”

Rio Mayor Eduardo Paes admits that crime has become a serious issue on the eve of the Olympics but blames the security problems on the state, not city, government. “This is the most serious issue in Rio and the state is doing a terrible, horrible job,” he told CNN.

In addition to violence and the effects of a bruising recession, preparations for the Rio Olympics have been plagued by Brazil’s political instability and a series of corruption scandals. Huge construction companies building stadiums and other Olympic infrastructure have been implicated in a multi-billion dollar embezzlement scheme centered on state oil company Petrobras.

The marketing firm was hired by the sports ministry to channel subsidies to fund athletes’ training, worth around nine million dollars, it said. SB Marketing declined to comment to AFP on the report.