Welcome to the Musharraf Show 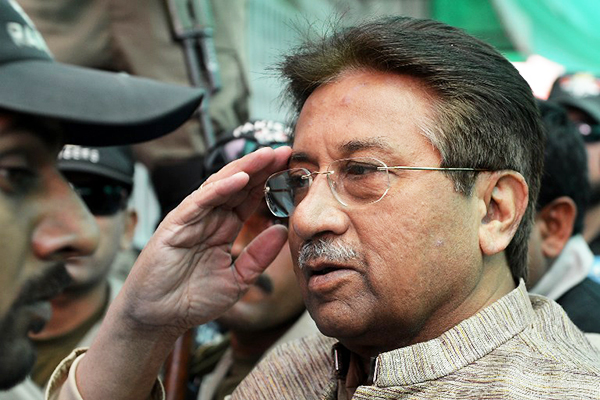 At an antiterrorism court in Islamabad, April 20. Aamir Qureshi—AFP

The ex-general’s leap of faith hits a run of bad luck.

Part of a wall fencing off Pervez Musharraf’s farmhouse in Islamabad collapsed from heavy winds on Saturday, summing up the many troubles the former Pakistani president and Army chief has had to weather since he ended some four years of self-imposed exile and landed in Karachi last month.

Musharraf came to participate in Pakistan’s upcoming elections, despite risks from Al Qaeda and the Taliban, who have tried to kill him before and have vowed to get him now; the party whose government he ousted in 1999 and which is now polling ahead of others; and judges he sacked in 2007—which includes the country’s powerful chief justice.

In short order since his return judges have barred Musharraf from contesting the elections—despite one of them having approved his bid to run for Parliament from the northern city of Chitral; begun hearing old and new lawsuits against him; and, on Thursday, canceling his bail and ordering his immediate arrest for the illegal sacking and detention of judges when he imposed a state of emergency on Nov. 3, 2007.

But Musharraf wasn’t immediately arrested Thursday despite the court order, a fact that prompted white-hot outrage among his detractors, including former prime minister Nawaz Sharif, who made Musharraf the Army chief only to be subsequently sacked, arrested, and exiled by him. Adding fuel to the fire, as is custom with Musharraf of late, one of his lawyers appeared before the press and said his client is in “good spirits,” sipping coffee and smoking cigars at his farmhouse. The outrage grew hotter.

The following morning Musharraf presented himself for arrest and, after the formal proceeding at a small local court, was sirened back to his heavily-secured farmhouse, which the interior minister said had been declared a sub-jail. But the judges were furious. Musharraf was still posting updates on Facebook and not showing the contrition expected of a man in his position. So he was taken from his farmhouse and placed under arrest at a police facility, walled off from visitors and social media.

After spending the night at the police facility, Musharraf was back at his farmhouse on Saturday. (Police say the jails are not secure enough to protect him from the militants baying for his blood.) He remains a prisoner, under arrest until the next court hearing in the matter two weeks from now.

His team of lawyers says Musharraf will appeal against the arrest, which was necessitated after the Islamabad High Court charged him with “terrorizing judges” while he was in power and it ordered a new proceeding under, surprisingly, the country’s antiterrorism laws. This smacked of overkill for some. Says political analyst Hasan Askari Rizvi: “The judiciary is overdoing it. It should show some restraint… It can grant bail now and take up the case after the elections, which should be our primary objective.”

Musharraf is facing a raft of charges, the most significant of which is his imposition of emergency over five years ago. The ex-general is accused of abrogating the Constitution, a treasonous offense which carries a single prescribed punishment: death. Whatever happens, says Rizvi, should happen after the new government is in place: “If the court starts his trial, he will entangle others to save his skin. The case can go in the wrong direction.”

Pakistan’s elections on May 11 will mark the first ever transition from one fully-civilian elected government to another. Already, the campaign has been bloodied by violence and attacks, leading many to fear either a long postponement or a turnout so low on Election Day that it dents the legitimacy of the next government. In either case, the winds of change are upon Pakistan. Let’s hope the walls hold up.

Musharraf is not the first to violate the supreme court and humiliate judges… and this judge who is fond of taking actions against others himself why’s he shut up and not taking the actions against those who attacked the supreme court.. This is double standards..
Musharraf if guilty must brought to books.. but this must not stop with him alone.. there are more sitting, retired and dead generals who have committed heinous crimes against this country and humanity.. they all must brought to justice.. Musharraf is not the first, before him Zia also broke the constitution, he must be sentenced as well a symbolic penalty ever after his death… and Musharraf was not alone to break the constitution… all those whether politicians, bureaucracy or even sitting military men whoever endorsed him stand equally guilty… nobody must skip the whip

If some one does a crime he must be punished and it is no excuse that others also did the same and so so the one in question must be spared.he behaved like a Ferro and there is always a Musa for one to mend him in the best possible way as the Pershian saying go;;;esHer Feron Ra Musa “