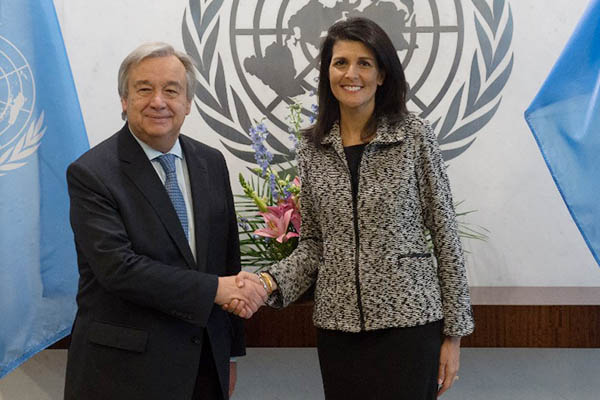 Washington’s new ambassador to the United Nations, Nikki Haley, vowed on Friday to show U.S. strength, bluntly warning those who oppose President Donald Trump’s policies that she is “taking names” and will respond.

The former South Carolina governor served notice that the new U.S. administration will push for an overhaul of the United Nations, in her first remarks at U.N. headquarters. “Our goal with the administration is to show value at the U.N., and the way that we will show value is to show our strength, show our voice, have the backs of our allies and make sure that our allies have our back as well,” Haley said. “For those who don’t have our backs: we’re taking names,” she added. “We will make points to respond to that accordingly.”

The United States is by far the U.N.’s biggest financial contributor, providing 22 percent of its operating budget and funding 28 percent of peacekeeping missions, which currently cost $7.8 billion annually. The White House is reportedly preparing an executive order that could deprive the United Nations of billions of dollars in U.S. financial support.

In his pledge to pursue an “America First” foreign policy, Trump has dismissed the United Nations as “just a club for people to get together and have a good time.” Relations became tense after the U.N. Security Council adopted a resolution in late December demanding that Israel end settlement construction.

The previous U.S. administration declined to use its veto to block that measure, prompting Trump to promise that “things will be different” at the United Nations under his administration.

Tough-talking Haley echoed that stance, promising “fresh eyes, new strength, new vision” as the U.S. envoy. “You are going to see a change in the way we do business. It’s no longer about working harder but working smarter,” she said.

The ambassador presented her diplomatic credentials to U.N. Secretary-General Antonio Guterres and held a 20-minute meeting with the U.N. chief, who was “delighted to meet her,” said U.N. spokesman Stephane Dujarric. “It was an introductory meeting and the start of engagement with the new U.S. administration,” he said.

Guterres, who took over from Ban Ki-moon on Jan. 1, is also pushing for changes at the United Nations to improve its ability to respond to crises.

A U.S. official said following the meeting: “They had a good and productive conversation about ways they can work together to reform the U.N.”

Haley’s appointment has been welcomed by many diplomats who notably praised her for her strong stance against racism as South Carolina governor, when she ordered that the Confederate flag be pulled down from the state capitol. Her lack of diplomatic experience however is expected to be a challenge as she confronts a string of complex issues on the agenda of the Security Council, where the United States is one of the five veto-wielding powers.