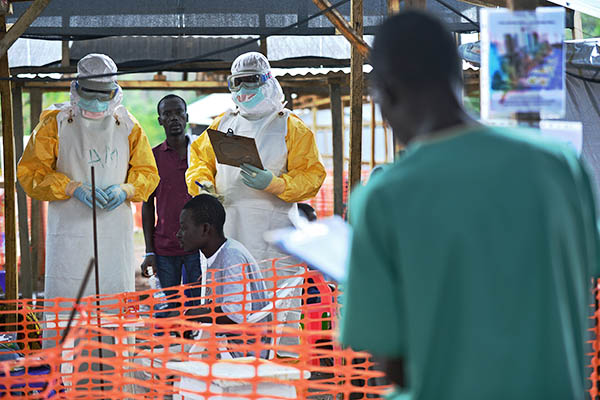 Doctors Without Borders chief says it could take six months to bring epidemic under control.

The Ebola epidemic is moving faster than the authorities can handle and could take six months to bring under control, the medical charity MSF said on Friday.

The warning came a day after the World Health Organization said the scale of the epidemic had been vastly underestimated and that “extraordinary measures” were needed to contain the killer disease.

New figures released by the U.N. health agency showed the death toll from the worst outbreak of Ebola in four decades had climbed to 1,145 in the four afflicted West African countries of Guinea, Liberia, Nigeria and Sierra Leone. “It is deteriorating faster, and moving faster, than we can respond to,” Joanne Liu, the chief of Doctors without Borders, known by its French acronym MSF, told reporters in Geneva. She added that it could take six months to get the upper hand.

“It is like wartime,” she said a day after returning from the region. “I don’t think we should focus on numbers. To really get a reality check, we’re not talking in terms of weeks, but months” to control the epidemic.”

Elhadj As Sy, the new head of the International Federation of Red Cross and Red Crescent Societies, painted a similarly bleak picture, speaking of a “fear factor” in affected countries that was hampering medical assistance. Also recently returned from the region, As Sy said he agreed with MSF’s six-month timeline for bringing the outbreak under control.

The WHO said Thursday it was coordinating “a massive scaling up of the international response” to the epidemic. “Staff at the outbreak sites see evidence that the numbers of reported cases and deaths vastly underestimate the magnitude of the outbreak,” it said.

There were signs too that affected countries were stepping up their efforts to contain the virus. Sierra Leone’s President Ernest Koroma announced plans on Friday for the construction of several more Ebola treatment centers, while urging the international community to “act quickly” in the fight against Ebola. The Red Cross and MSF would build the four new centers, he said.

The epidemic erupted in the forested zone straddling the borders of Guinea, Sierra Leone and Liberia earlier this year, and later spread to Nigeria. Liu said while Guinea was the initial epicenter of the disease, the pace there has slowed, with fears now focused on the other countries. “If we don’t stabilize Liberia, we’ll never stabilize the region,” she said.

The last days of an Ebola victim can be grim, characterized by agonizing muscular pain, vomiting, diarrhea and catastrophic hemorrhaging described as “bleeding out” as vital organs break down. No cure or vaccine is currently available for Ebola, with the WHO authorizing the use of largely untested treatments in efforts to combat the disease.

Hard-hit nations are awaiting consignments of up to 1,000 doses of the barely tested drug ZMapp from the United States, which has raised hopes of saving hundreds. Canada says between 800 and 1,000 doses of a vaccine called VSV-EBOV, which has shown promise in animal research but never been tested on humans, would also be distributed through the WHO.

But MSF’s Liu warned against focusing on drugs. “In the short term, they’re not going to help that much, because we don’t have many drugs available. We need to a get a reality check on how this could impact the curve of the epidemic,” she said.

Sierra Leone’s chief medical officer Brima Kargbo this week spoke of the risks facing health workers fighting the epidemic, which has killed 32 nurses since May as well as an eminent doctor. “We still have to break the chain of transmission to separate the infected from the uninfected,” Kargbo said.

The cost of tackling the virus is also threatening to take a severe toll on the economies of already impoverished West African nations hit by the epidemic. In Nigeria, in particular, a more serious outbreak could severely disrupt its oil and gas industry if international companies are forced to evacuate staff and shut operations, rating agency Moody’s has warned.

Nigerian sex workers also reported suspicion from customers, with business down drastically. One woman in Lagos who gave her name as Bright told AFP that Ebola was “worse than HIV/AIDS. You can prevent HIV by using condoms but you can’t do the same with Ebola.”

Across the region, draconian travel restrictions have been imposed and a number of airlines have cancelled flights in and out of West Africa. Guinea, where at least 380 people have died, became the latest country to declare a health emergency, ordering strict controls at border points and a ban on moving bodies from one town to another.

As countries around the world stepped up measures to contain the disease, the International Olympics Committee said athletes from Ebola-hit countries had been barred from competing in pool events and combat sports at the Youth Olympics opening in China on Saturday.