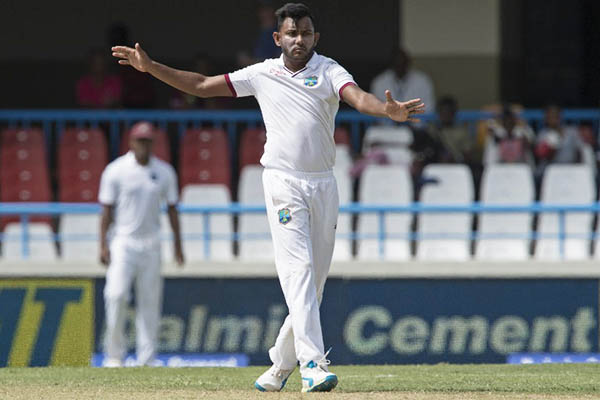 Leg-spinner says batsmen appear to be having difficulty with pink ball being used in day/night Test matches.

Bishoo warmed up for the landmark Test by taking 5-107 in a 36-over workout to help the West Indies bowl out a Pakistan Cricket Board Patron’s XI for 308 on the second day of the three-day match in Sharjah on Saturday. Now, the 30-year-old from Guyana is keen to catch Pakistan’s star-studded batting line-up—which includes Azhar Ali, Misbah-ul-Haq, Younis Khan and Asad Shafiq—cold in the three-Test series.

“The feedback I got from the batsmen was that they were finding it difficult to pick,” said Bishoo of the pink ball. However, he added: “It was not spinning because the pitch was a bit flat and slow. You have to bowl with pace. It gets discolored but it’s not different from the red or white ball.”

Bishoo, who will lead a West Indies spin attack which also includes off-spinner Roston Chase and left-armer Jomel Warrican, knows he faces a heavy workload against a Pakistan team which is traditionally comfortable against spin. “Batsmen in Pakistan, India and Sri Lanka are good so as a spinner you have to bowl at the right area and do the right things. I am ready for that and if you bowl good spin, you get rewards. I am just looking for a good series,” said Bishoo, who made his Test debut against Pakistan in 2011—senior batsman Misbah-ul-Haq was his first victim.

The spinner hopes the Test series will deliver better performances and results for the West Indies, who were routed 3-0 in both the Twenty20 and one-day internationals. “The limited-overs matches were different. They were difficult times, but that’s not on my mind. The Tests will be different.”