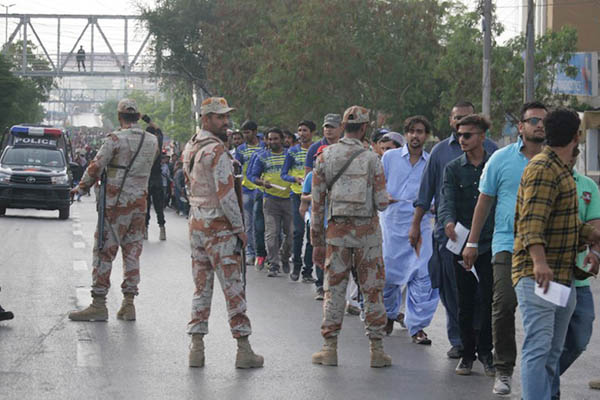 West Indies coach Stuart Law has praised Pakistan’s security arrangements during his team’s time in Karachi, saying he hoped their experience would open the door for more cricket series to be held in the country.

The West Indies completed a three-match Twenty20 series late Tuesday and although his team was whitewashed by world number one Pakistan 3-0, Law was happy with their treatment by authorities. “It’s a bit daunting for the people outside but once you get here and see for yourself, you feel more confident,” he said during the post-match press conference. “The security has been outstanding, and we haven’t had any problems.”

Pakistan’s military put stringent security arrangements in place with 8,000 policemen and military personnel guarding the team hotel and stadium for the series. “I’m not saying that it will open the floodgates and bring everyone rushing back, but from what I’ve seen here, it’s more than adequate and we should be able to get cricket back to Pakistan,” said Law.

Pakistan is on a long road to revive international cricket following six years of isolation from 2009 to 2015. Pakistan was a “no-go” area for foreign teams after militants attacked the Sri Lankan team bus in Lahore in 2009. After being shunned for years, Zimbabwe toured Pakistan for a short series in 2015.

The successful outing was followed by two Pakistan Super League finals in 2017 and 2018 along with three Twenty20 matches against a World XI and one against Sri Lanka last year.

The 49-year-old West Indian coach Law is a former Australia batsman who was part of the team that lost the 1996 World Cup final to Sri Lanka in Lahore. “I’m a big fan of Pakistan cricket,” said Law. “The fans here in the subcontinent are pretty passionate. This was the first time I’d been to Karachi and the fans here were outstanding every night. They were very respectful to us. Everywhere we’ve been, we’ve been treated very well.”

Since 2009 the United Arab Emirates has served as Pakistan’s neutral venue.