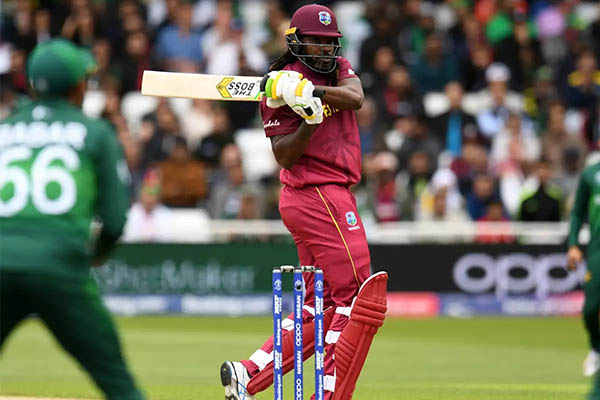 Sarfraz Ahmed-led team was defeated for a paltry 105 in just 21.4 overs

West Indies crushed Pakistan by seven wickets in a one-sided contest at Trent Bridge on Friday as the two-time champions laid down a marker in their first match of the World Cup.

Pakistan had no answer to the West Indies’ fast bowlers and were bundled out for a paltry 105 in just 21.4 overs—their second-lowest World Cup total.

Man-of-the-match Oshane Thomas took four wickets and captain Jason Holder chipped in with three as Pakistan folded without much of a fight on the second day of the tournament in England and Wales.

Chris Gayle then led the West Indies charge with a quickfire 50 as the 1975 and 1979 champions cruised to victory in just 13.4 overs.

During his innings Gayle, who reached his 50 in 33 balls, broke the record for the most sixes hit in World Cup history—he now has 40, three more than retired South African batsman AB de Villiers.

“It was a good game. I think the bowlers were outstanding today,” said Holder. “We kept our foot on the accelerator. We’ve eased off in the past but it was good to see the killer instinct today. We wanted to be aggressive. It’s the nature of our cricket with bat, ball and in the field. We’ve definitely come to win this World Cup but I just want us to enjoy our cricket, play fearless cricket and make the fans back home proud.”

The only positive for Pakistan was three wickets for paceman Mohammad Amir on his World Cup debut after he missed the 2011 and 2015 tournaments due to a spot-fixing ban in 2010. Amir had Shai Hope (11), Darren Bravo (0) and Gayle caught in an incisive six-over spell, but the batsmen had not put enough runs on the board to give the bowlers a chance.

Pakistan’s sloppy and vulnerable batting was cruelly exposed by some short-pitched bowling on a Trent Bridge pitch famous for big totals.

Fakhar Zaman and Babar Azam were the joint top-scorers with 22 each in an abysmal display of batting. The only other batsmen to reach double figures were Wahab Riaz, who scored 18, and Mohammad Hafeez (16).

But this was not Pakistan’s lowest total at a World Cup, which remains the 74 they made against England at Adelaide on the way to their only World Cup title in 1992—where they suffered a 10-wicket thrashing by the West Indies in their opening match.

Pakistan have now lost their past 11 completed one-day internationals but will take heart from their Champions League Trophy win in England in 2017, when they recovered from a drubbing by India to win the final against their fierce rivals.

Pakistan captain Sarfaraz Ahmed, said two early wickets from Andre Russell, to dismiss Zaman and Haris Sohail, put them under pressure. “We could never really put partnerships together and that was the reason why we were bowled out for 105,” he said. “It was a bad day on the field. We knew they would bowl short-pitched balls and we had prepared for that, but on the pitch we couldn’t cope with that.”

Holder said Russell (left knee) and Gayle (long-standing back problem) would have their fitness monitored ahead of West Indies’ next group game against Australia, also at Trent Bridge, on Thursday.