West Indies Skipper Calls for Cricket to Return to Pakistan 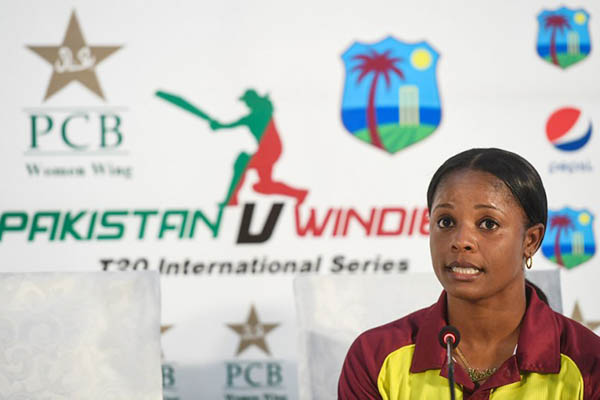 West Indies skipper Merissa Aguilleira on Wednesday called for cricket nations to return to Pakistan as her squad arrived in the country ahead of a three-match Twenty20 series.

The 31-year-old from Trinidad is leading the 13-member side that landed in Karachi early Wednesday, amid tight security for the first visit to Pakistan by a non-Asian women’s team in 15 years.

Even as security dominated the day’s discourse, the team was able to enjoy the finer sides of Pakistan’s largest city, including a camel ride along Clifton beach.

Bangladesh was the last women’s team to tour Pakistan in 2015. The West Indies last visited the country in 2004. The side, which will miss their captain Stefanie Taylor—who withdrew from the tour over security fears—will play three matches against their Pakistani counterparts on Thursday, Friday and Sunday in Karachi.

Aguilleira said Pakistan—which has only hosted a handful of limited over matches since a militant attack on the Sri Lankan team bus suspended international cricket in the country in 2009—is back on track. “I think right now we are heading in the right direction when it comes to bringing back the cricket in Pakistan,” said Aguilleira at the trophy unveiling ceremony. “I really believe that the other teams should really be thinking about it [touring Pakistan] because it’s not just about teams, it’s about cricket and when you look at the fans they are so happy that we are here.

“I am so thankful to God that we can really bring back cricket to Pakistan,” Aguilleira added. “I am urging that other teams come back to Pakistan because the people love cricket which is most important to do as ambassadors of the sport.”

Pakistan’s captain Bismah Maroof—one of four players who played in the Bangladesh series at home four years ago—said the West Indies tour sends the right message. “Definitely, this tour was important for the promotion of women’s cricket,” said Maroof. “West Indies team coming here will send a good message to the world and our people love the game and hopefully West Indies team will enjoy here.”

Approximately 1,000 police and paramilitary forces will also be on hand to provide security at The South End Club where all three matches will be played.

On the field, West Indies will start as favorites after winning the Twenty20 World Cup in 2016 and competing in the semi-finals last year. They have beaten Pakistan in six of the nine Twenty20 internationals between the two teams with one defeat and two tied matches.