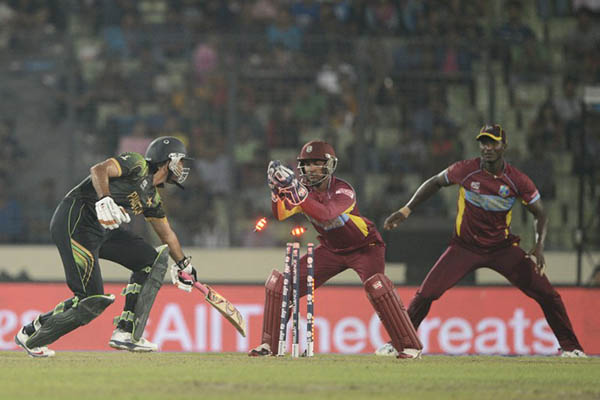 Loss marks the first time that Pakistan has failed to reach the knock-out rounds of the World Twenty20 tournament.

Defending champions West Indies charged into the World Twenty20 semi-finals with a spectacular 84-run win over Pakistan in a key Super-10 match in Dhaka on Tuesday.

The West Indies recovered from a top-order meltdown to post 166-6 after electing to take first strike, before three wickets each by spin twins Samuel Badree and Sunil Narine reduced Pakistan to 82 runs in 17.5 overs.

The West Indies, who finished second behind unbeaten India in group two, will clash with group one champions Sri Lanka in the first semi-final in Dhaka on Thursday. India, who won all four league matches, meet South Africa at the same venue on Friday. The final will take place in Dhaka on Sunday.

It was the first time Pakistan, finalists in the inaugural World T20 in 2007 and champions in 2009, failed to reach the knock-out rounds in the five editions of the tournament.

The West Indies slumped to 81-5 before skipper Darren Sammy and Dwayne Bravo led a dramatic rescue act by adding 71 for the sixth wicket off just 32 balls. Bravo smashed four sixes and two fours in a 26-ball 46, while Sammy remained unbeaten on 42 off 20 balls that contained five fours and two sixes.

The West Indies scored 71 runs in the last four overs, taking 21 runs in the 18th bowled by seamer Umar Gul and 24 in the 19th by off-spinner Saeed Ajmal. Bravo, who was named man of the match, said he would have preferred to share it with Sammy and Badree.

“We have the bowling to defend any total, but I really did not expect the match to be so easy,” he said. “Pakistan did have our top order in some bother, but then our batting runs deep and we showed that today. I think Sammy and Badree were equally deserving of the award. We have the momentum going into the semi-finals and I am confident we will do well there too.”

Pakistan captain Mohammad Hafeez apologized for his team’s fans for not doing better in the key game. “I must thank our fans for their support and apologize for letting them down,” he said. “This was obviously not our best performance, but we had the game in control at the start. All credit to the West Indies for taking the game away from us. Those four final overs cost us dearly and then we panicked at the start of our chase. It became a very difficult target to chase.”

Pakistan never recovered after Ahmed Shehzad, who scored a century in the previous match against Bangladesh, was leg-before to Krishmar Santokie off the first ball of the innings. Badree removed Kamran Akmal in the second over, Umar Akmal in the fourth and Shoaib Malik in the sixth to leave Pakistan tottering at 13-4. Hafeez (19) and Sohaib Maqsood (18) fell in successive overs to make it 42-6, before Narine removed Shahid Afridi and Sohail Tanvir in four balls to hasten the end.

Earlier, the West Indies lost both openers by the fourth over, with Chris Gayle stumped off Hafeez for five and Dwayne Smith caught behind off Tanvir for eight. Lendl Simmons and Marlon Samuel added 39 for the third wicket when both batsmen fell in the 11th over to reduce the West Indies to 67 for four.

It soon became 81-5 as Denesh Ramdin holed out in the deep off left-arm spinner Zulfiqur Babar, but Sammy and Bravo stepped in to play what turned out to be match-winning knocks.