‘What a Brave Nation’ 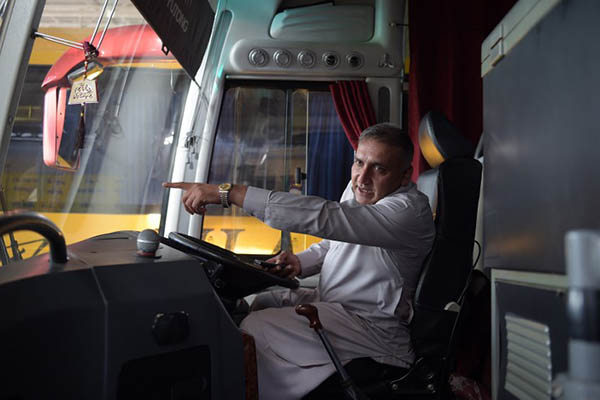 Driver Meher Muhammad Khalil became a hero when militants attacked the Sri Lankan cricket team bus on a busy street in Lahore in 2009, holding his nerve under gunfire to whisk them to safety. Eight years later he is ready to welcome Sri Lanka back for militancy-wracked Pakistan’s first cricket match against a top international team since that terrible day.

The bus ambush, in which eight people were killed and eight wounded, including seven Sri Lankan players, drove cricket and most other international sports from Pakistan for years. But security has now improved, and Sri Lanka agreed on Monday to go ahead with its visit to Pakistan next week for a Twenty20 match in Lahore, despite fears expressed by some players.

Khalil says the hype surrounding Sri Lanka’s return has sharpened his memories of the assault on the morning of March 3, 2009 as he drove the team to Gaddafi Stadium. Two elite police vehicles were in front of the bus as he eased on to Liberty roundabout in the heart of Lahore when Pakistani Taliban militants opened fire, spraying bullets along the convoy.

“First I thought it was fireworks for our guest team,” he told AFP, standing in the street where the ambush began. “Then a man came in front of me [and] fired straight at me with a Kalashnikov… I realized, it’s not fireworks.”

The militants shot the drivers first, he said, killing the two in the lead vehicles on the spot. Khalil saw their vehicles skid one to the left and one to the right, opening a path down the center—and then he hit the accelerator. “They fired intensely on the vehicle, and also lobbed a hand grenade and fired a rocket,” he said, but both missed.

He does not remember hitting the brakes, he said, until he had driven the bus right inside Gaddafi Stadium. A security cordon was thrown up and he and the players stayed there until a Pakistani military helicopter airlifted them right out from its grassy pitch.

In the harrowing aftermath, Khalil was awarded medals and given cash prizes from grateful Pakistani and Sri Lankan officials. But Pakistan’s security continued to deteriorate, and the Taliban kept gaining ground.

Khalil’s newfound VIP status just made him a target, he feared, and by the end of the year he had fled the country, first to Morocco then to South Africa. By 2013, however, he had returned to Pakistan, and once more drives a bus in Lahore.

Pakistan’s fortunes, meanwhile, have improved, with a dramatic uptick in security in recent years, although militants still carry out spectacular attacks.

The growing confidence led to a visit by minnows Zimbabwe in 2015—a small step in cricket terms, but as the Pakistani national anthem rang out in Gaddafi Stadium for the first time since 2009, a giant leap for home fans. It was followed by the final this March for the hugely popular Pakistan Super League, where fans held up banners proclaiming “Pakistan wins today.”

And last month a World XI side led by Faf du Plessis visited for three T20 matches, with the foreign players hailing the series as “more than cricket.”

International Cricket Council (ICC) officials acknowledged that Pakistan had made “tremendous strides,” though there was still a long way to go.

The T20 finale comes at the end of a series otherwise played in the United Arab Emirates, where Pakistan have held their “home” internationals since the ambush.

Sri Lanka’s return, officials hope, will represent another turning point. “See what a brave nation they are,” Khalil said, his eyes glittering. “That this incident happened to them and still that team is coming to play in our country. The whole of Pakistan should give them protocol [respect] and welcome them very warmly.”

Sri Lankan officials have said they agreed to the game after assessments by Sri Lankan and Pakistan authorities, independent security experts and the ICC. The country’s cricket chief, Thilanga Sumathipala, has previously appealed for an end to Pakistan’s isolation and urged other teams to come to play.

Khalil, however, urged caution, calling for “foolproof security” for all foreign players in Pakistan.

The Sri Lankan players had been nervous the night before the ambush, he said, describing a conversation with batsman Kumar Sangakkara that evening. “Sangakkara asked me: ‘Mr. Muhammad, are we people safe in Pakistan?’”

“I told him nothing will happen, and if, God forbid, something happens then thousands of people like me will sacrifice our lives for you.”

The next day, after their worst fears came true with Sangakkara among the wounded, he visited the Sri Lankan player in hospital. “He told me, ‘You are a great man… You are my hero,’” Khalil said.