What America Means to Israel 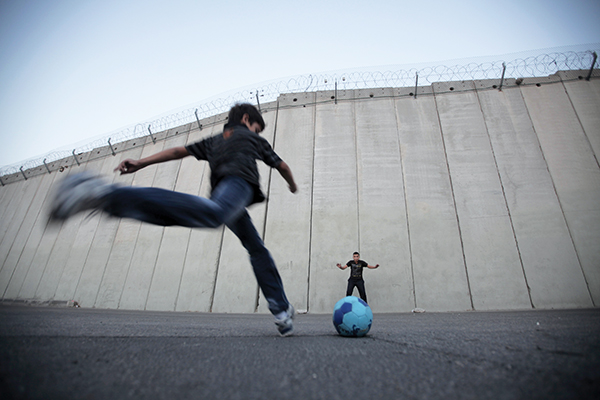 [dropcap]T[/dropcap]he best nutshell definition of Israeli-U.S. relations is still the one attributed to Moshe Dayan. “Our American friends,” he allegedly quipped, “offer us money, weapons, and advice. We take the money, we take the weapons, and we decline the advice.”

Dayan would have made a fabulous tweeter. But beware. The American-Israeli bond is so unique that it defies nutshelling. It’s more of a nut grove. It never rested on reason of state alone. Between them, Americans and Israelis subvert the core curriculum of political-science departments and the truisms of international relations. Our friendship is of course about money, weapons, and advice—but also about something subtler.

To understand this, you need long-term memory. You need to go back to President Truman.

But let us start with short-term memory. Most young Israelis today picture the U.S. within a few basic pixels: Internet, 9/11, smartphones, CSI, Batman, Obama. Israelis always belonged with the rest of the world when it bathed in things American, all the way from West Side Story remakes to Occupy Wall Street T-shirts. Except that we never developed a stark anti-Americanism of either the European or Muslim brands. We depended on the U.S. too much, and we kind of liked it, too.

Not all of it. Not all of us. Many habits, etiquettes, and turns of phrase are lost in translation. Israeli Jews are not the bagel-and-lox Jews of downtown Manhattan, but the schnitzel-and-hummus fusion of Europe and the Middle East. American directness and Israeli bluntness do not always mix well. Idealistic Israelis, from Orthodox to socialist, like to chasten Americans for their hedonism, while Americans find Israelis a tad rough-hewn.

In the old days distance still mattered—you have to cross two ponds to get from Tel Aviv to New York. Today we follow each other’s hurricanes and missile attacks online, and Israelis complain when a new season of South Park airs here two weeks in arrears. Old cultural layers blend with the new. From Moby-Dick to Mad Men, we are tuned in.

But Israel was never really colonized by America. No one felt the need to demonstrate in front of the first McDonald’s franchise in the Holy Land. Instead Israelis picked and chose, reshaped and reinvented. Our Silicon Wadi vies with its big American brother in a small but daring way. So, more recently, does our television. A small culture is in good shape when it is able to respond to a global culture creatively and irreverently. I hope Israel can figure out a way to export creative irreverence.

Let’s get to the harder nuts. The Israeli social protest in the summer of 2011 preceded the American Occupy Wall Street movement and to some degree inspired it. But our street-level activism was more peaceful, more mainstream, more effective, and it is still rolling. Israelis love American high tech, but consider American social arrangements distinctly low tech. When The Simpsons’ Mr. Burns says, “This is America! Justice should favor the rich,” Israeli viewers pay attention. Many of us admire America’s constitutional stability and civil rights—not to mention its penchant for political satire—but prefer to look elsewhere for the foundations of our own social justice.

Do Israelis secretly dream of becoming Americans? Several hundreds of thousands fulfilled this dream, although American accents can be heard almost everywhere in Israel, too. Most Israelis would subscribe to the lines of a famous local band, Ethnix: “Life is not America, and America’s just another place/It’s all in your head/If you want it, the dream is here too.” So when the State Department finally cancels the visa requirement, and even if it hands out green cards to every Israeli Bachelor of Science, don’t expect our nation to relocate to there. Barring disaster, our health-care system is still far better, our local patriotism is somewhat battered but alive, and the Israel Trail (well, yes, inspired by the Appalachian) is still one of the finest treks in the world.

What about the Palestinians? Even Israel’s best American friends increasingly consider the 46-year occupation as a rolling disaster. Not for nothing did Israelis latch on to that famous Wild West catchphrase, “If you have to shoot, shoot. Don’t talk.” We have been shooting a lot and talking (with our enemies) too little. Whether it was Abu Mazen or Benjamin Netanyahu who unraveled the Oslo peace process remains an open question. But Israelis are well aware that their leaders often take the money, take the weapons, and decline the advice from Washington and wonder just how far this game can be played.

The unresolved and unsavory affair of Jonathan Pollard is a case in point. A lot of Israelis really believe that Pollard, an American spy for Israel, has been imprisoned far too long. They probably underestimate the Americans’ profound sense of betrayal. But whether you like it or not, Pollard is one of the pixels in Israel’s snapshot of America today.

Has our government pulled the rope once too often? Evidently not. Is that likely to happen? Perhaps. America is changing fast, the Middle East is ablaze, and future-gazing Israelis know that the current constellation may alter dramatically. But in the present moment, in the wake of Obama’s visit to Jerusalem and Netanyahu’s multiple visits to Washington, the special relationship looks invincible. If there is a breaking point, we are not there yet.

Israel would make a lousy puppet state. We are too hard-headed for that.

When Americans look at Israel and recognize something of themselves, they must always come to terms with our other chromosomes, too. Israel’s often infuriating way of sticking by its own devices is strangely attractive in American eyes. That attraction is made up, in unequal parts, of Christian Israelophilia, democratic affinity (at times oblivious of democratic deficits), and the well-earned status of Jewish Americans. If you think Israel is America’s puppet—a mistake made by Mahmoud Ahmadinejad and his ilk—you’d better think again. It is precisely Israel’s chutzpah, its refusal to emulate or obey, that reminds Americans of their own deep spirit. Israel would make a lousy puppet state. We are too hardheaded for that. Pigheaded, some would argue, but this is too tactless a metaphor.

Jewish Americans are a crucial part of the story, but very far from being the whole story. My generation was brought up on the distant lap, as it were, of the “uncle from America”—not Uncle Sam, but Uncle Shmuel. Little did we know how deeply Shmuel wanted to become part of Sam. Today, when Shmuel’s grandchildren have biblical names again (even if their dad was called Kyle), their self-confident generation tends to question Israel in new ways. Israelis are of course aware of the mounting controversy between self-styled “pro-Israel” traditionalists and the newer voices of critical engagement, such as J Street. Some of us find this unnerving, but others are relieved to see Israel’s inner debates finally reflected by an American spectrum of opinion. If Israel’s citizens can lash out against their government without being considered “anti-Israel,” why not our overseas friends? Far more intriguing, almost unfathomable, is the fascination of so many non-Jewish Americans with Israel. Accounting for America’s Israel policy in terms of self-interest and Jewish lobbying alone is exactly like the anti-Semitic description of the Jew as a money grabber. It simply fails as an explicatory device. This relationship is one of the best laboratories in modern history for examining the role of strong feelings, perhaps even honest-to-goodness values, alongside conventional interests of state.

Which brings us to long-term memory. The young student audience at President Barack Obama’s Jerusalem speech may know little about Thomas Jefferson and nothing about Teddy Roosevelt, but historical perspective is an acquired trait. The truly significant eventually prevails over the merely recent.

Several Israeli-American moments were momentously significant. Henry Kissinger delivered an early version of what we now call tough love, patiently and somewhat overbearingly brokering the Israeli-Egyptian ceasefire after the Yom Kippur war of 1973. Jimmy Carter turned from the lovable overseer of the peace with Egypt to a questionable purveyor of Israel critique that is widely deemed unlovingly tough. Bill Clinton walked with Israelis from the heady days of the Oslo accord to the dark morning of Yitzhak Rabin’s funeral. His two-word epitaph shalom, chaver (goodbye, friend), immediately became a cultural buzzword. George W. Bush, warring with Iraq and supporting the disengagement from Gaza, gained Israeli fans and detractors. But none of them matched Harry S. Truman.

His Israeli moment was not just significant. It was epic. Just hours after David Ben-Gurion’s declaration of independence in embattled Tel Aviv on May 15, 1948, the United States became the first country to recognize Israel. Truman wanted a state for the Jews out of fairness, because it was historically right, and out of faith, because the people of the Bible had returned home. Other motives notwithstanding, his was a spiritual move.

The annals of the Jews have many epic moments. Most of them were horrific showdowns between us and our persecutors, frequently resulting in massacre, expulsion, or genocide, but ultimately forcing the Jews to fend for themselves through migration and state building. Until 1948, no nation ever offered us what Truman’s America did: trust and friendship on a grand international scale. The Christian farm boy from Independence, Missouri, was as un-Jewish as they come. There was a mind-boggling difference between Truman’s kind of America and historic Jewish existence. Perhaps for the first time in Jewish history, our epos was not only about surviving annihilation, but also about human bonding across a national and religious chasm: the coming together of the different. That moment is still an indispensable key to understanding America and Israel today.

Can Barack Obama still make an epic stamp on Jewish (and Arab) history? Can this great rhetorician bring peace by deeds rather than words? Israelis are divided: some hope for this, others fear it, and a growing number of people from both camps think it’s not going to happen. Beautiful words will remain just beautiful words.

In late October 1973 my father briefly returned from the Syrian front. His uniform was tattered, and there was shrapnel in his arm. We went for a walk. From a hilltop near our kibbutz we could see jets landing in Israel’s national airport, soon to be named after Ben-Gurion. Do you see those airplanes? They are not civil flights, my dad said. No one is flying to Israel these days. It’s the American aerial train. They are bringing us weapons, ammunition, and equipment. The United States is our truest friend. Never forget it.

I never did. Here’s my hope: one day soon my kids and I will watch the signing ceremony of the Israeli-Palestinian peace treaty. Do you see the American president? He made this peace possible, I’ll tell them. No one else could do it. The United States is our truest friend. Never forget it.

Oz-Salzberger is a professor of history at the University of Haifa and the coauthor, with her father, Amos Oz, of Jews and Words. From our May 3, 2013, issue; What America Means to Israel.