Home Business What Caused the Pound to Plunge?

What Caused the Pound to Plunge? 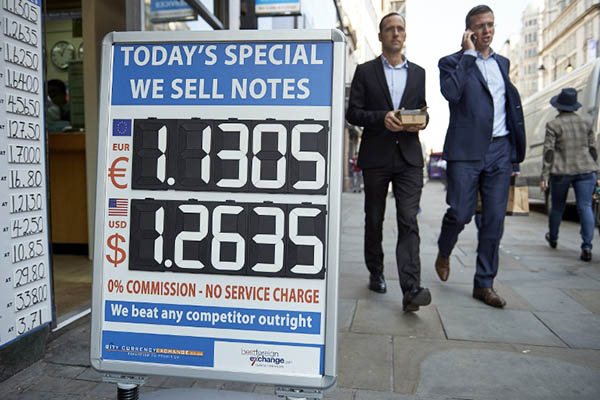 Sterling crashed to 6.5-year low against euro in under 10 minutes.

A rapid descent in the pound against the dollar on Friday, referred to as a “flash crash,” set tongues wagging across global trading floors as to what triggered the rare event.

What caused the dive?

After the pound crashed more than six percent against the dollar in under 10 minutes during Asian trading hours, various explanations have been given.

A spokesman for the Bank of England said simply that it was “looking into what happened” after sterling crashed also to a 6.5-year low versus the euro. Traders think that in today’s tech-dominated world, it probably had a lot to do with complex mathematical equations known as algorithms.

Automated trading systems can be set up to keep an eye on news headlines and react to potentially market-moving information. The Financial Times—among the first to report comments by French President Francois Hollande on Brexit—said the computers may have been reading its website. “Many algorithmic traders include tracking news websites in their systems. The FT story was first published the same minute as the move lower began,” the paper said.

Market analyst David Cheetham at XTB agreed. “It seems… plausible that news-scanning algorithmic trading systems began a move which gathered momentum as stop loss orders were triggered on the way down,” he said.

What news was potentially analyzed?

Analysts say the move could have been in response to Hollande sending one of the strongest warnings yet that Britain will have to pay a heavy price for leaving the European Union. “Comments from French President Hollande [surfaced] a minute before the selling began, so it seems far more plausible that news-scanning algorithmic trading systems began a move which gathered momentum,” said XTB analyst David Cheetham.

It comes at the end of a week in which British Prime Minister Theresa May hinted at a “hard” Brexit when announcing that her Conservative government was in favor of Britain leaving the single market, thus ending the free movement of people. “While the pound has recovered a large majority of its losses, it continues to trade well below yesterday’s levels which just goes to show how pessimistic people are about the U.K. economy in a week in which people have come to realize that a hard Brexit, or something that resembles it, is not just a possibility but a probability,” Erlam added.

In the late afternoon on Friday, the pound was trading 1.9 percent lower against both the dollar and the euro, at $1.2381 and 1.1101 euros, respectively.

What lies ahead for the pound?

Kathleen Brooks, research director at City Index, said markets should be braced for more turbulence on sterling trades. “Since the pound is being driven by headlines at the moment, last night’s price action could put some people off trading the pound in case it happens again,” she told AFP. “Theresa May said that Brexit negotiations will take place behind closed doors, only adding to the uncertainty about what our exit from the E.U. will look like, which could trigger further panic in the sterling market in the months and years to come. Sterling is definitely not out of the woods yet.”