Home Lightbox What Happened in Daska?

What Happened in Daska? 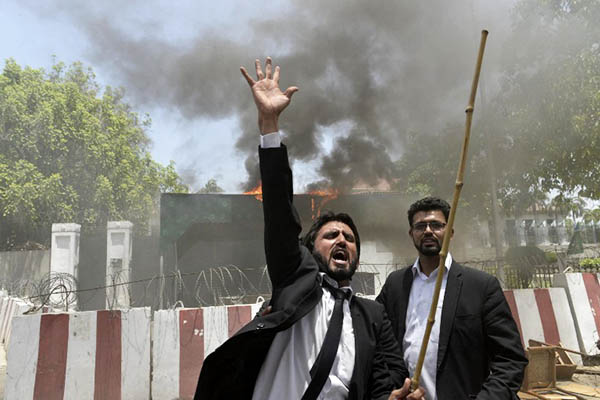 Lawyers set fire to the checkpoint entrance of the Punjab Assembly in Lahore, May 26, 2015. Arif Ali—AFP

A timeline of the events that led to lawyers leading mass protests across Punjab province.

The killing of two lawyers by the police in Daska has led to mass protests by lawyers in all major cities of Punjab. Newsweek has tried to put together the sequence of events by talking to various sources. What follows is the gist of events of that fateful day as well as the background to how and why the incident happened.

On May 25, 2015 at around 12:00 noon, a scuffle took place in Daska between the police and some lawyers. The incident resulted in the killing of two lawyers. However, our sources say that the situation was already fraught because of an old rift between the lawyers and Daska police.

Some two weeks ago, a police party had raided the premises of the Tehsil Bar (Daska) to apprehend a proclaimed offender alleged to have been present in the building. Sources reveal that the lawyers resisted the arrest and told the police to not apprehend the PO from the premises of the bar. The issue created tension but was resolved.

The Tehsil Municipal Administration office has been shifted to a new building. Its old building has been occupied by some lawyers. The TMA wanted to re-occupy the building. This move was resisted by the lawyers. The TMA staff called for the police. The police tried to settle the issue but the lawyers, according to witnesses, misbehaved with the police personnel. The issue was again settled but tension continued to linger.

This led to hot words and a scuffle broke out between the lawyers and the TMA staff. A TMA clerk, Ch. Farooq, was beaten up by the lawyers. Ch. Farooq called the city Daska police station, located about 50 meters from the TMA office. The Station House Officer of City police station sent a bike patrol of two personnel to defuse and control the situation.

The policemen sent by the SHO could not handle the situation and informed the station whereupon the SHO himself went to the site. Sources say that Rana Khalid and his friends exchanged hot words with the SHO and also manhandled him. The SHO was later followed into the station by the lawyers.

The SHO, in order to disperse the lawyers, took his gunman’s weapon and fired an aerial burst. Upon this Advocate Irfan Chauhan abused the SHO and challenged him to fire straight at the lawyers instead of firing in the air.

This enraged the SHO who then fired straight at the lawyers, injuring three of them, as also a passerby, named Khurram. Later, Advocates Rana Khalid and Irfan Chauhan succumbed to their injuries while the other two injured were brought to Civil Hospital, Gujranwala.

It was a bad day . Now it’s the time to think and formulate code of conduct to avoid such incidents in future . Every person should remain in his limits provided by law . Law provides remedies against all wrongs.

For lawyers shame on you all , are you all Badmash

Our police sho was soo short tempered that he preferred shooting at unarmed people who just sbused him. Do you believe that sho didnt abuse any lawyers. Or our police is so royal that the abuse deserves capital punishment.i dont see any sho dead on floor. Our police has been encouraged to target educated people in past.like teachers doctors and lawyers. I think no such incident would have happened if ghere was some politician involved.because they hsve the right to strip anyone off respect and still get away wiyh it…!

These lawyers are the scum of this society. Their bars protect them and they have a license to abuse the system.

The Lawyers obviously assaulted a govt. building, the police station.
This was the third time in a few days the lawyers misbehaved and taunted at the police. An assault would lead to self Defence. The officers did so in the line of duty.