What is Myanmar’s ARSA? 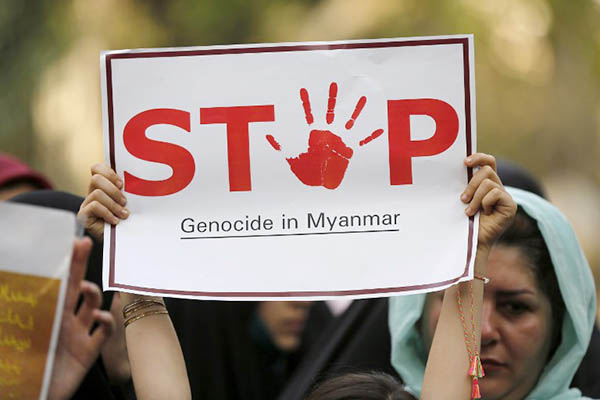 The Arakan Rohingya Salvation Army (ARSA), the militant group which tipped Myanmar’s Rakhine state into a crisis, on Sunday declared a unilateral ceasefire until Oct. 9.

Deadly attacks by ARSA began on Aug. 25, provoking weeks of operations by Myanmar’s troops and police, which have sent around 300,000 Rohinyga fleeing to Bangladesh. A further 27,000 ethnic Rakhine Buddhists are internally displaced as the state is once more devoured by communal and religious violence.

Despite decades of oppression in mainly Buddhist Myanmar, the predominantly Muslim Rohingya have largely refrained from violence. ARSA made itself known as a serious force last October when it carried out deadly attacks on unsuspecting border police, killing a number of them and seizing weapons.

The Aug. 25 attacks were bolder and more sustained—striking 30 police posts in one night and then maintaining several days of ambushes as Myanmar security forces hit back.

ARSA initially called itself Harakah al-Yaqin (the Faith Movement). The front man is Ata Ullah, a charismatic commander who lambasts Myanmar’s treatment of the Rohingya in videos and English written statements circulated on their active Twitter account (@ARSA_Official). He is believed to have been born to a Rohingya family in Karachi and to have lived in Saudi Arabia.

A report by the International Crisis Group said the militants answered to a leadership committee of wealthy Rohingya émigrés in Saudi Arabia. They set up the group in 2012 after anti-Muslim riots swept Rakhine.

Myanmar authorities have previously said ARSA has links to militants trained by the Pakistani Taliban, and have declared it a terrorist organization.

What do they want?

The group uses some of the rhetorical flourishes common to Muslim militants worldwide, opening its messages with Islamic greetings. However, there is little evidence so far that it is pursuing a violent Islamist agenda.

Instead, members say they want to protect the Rohingya inside Myanmar from persecution by the state and security forces.

Myanmar authorities paint a different picture, saying they are Muslim “extremist terrorists” who want to impose Islamic rule over a portion of Rakhine state. The army accuses ARSA of killing ethnic Rakhine Buddhists, animist tribespeople and Hindus during the recent violence.

Analysts say the scale of the Aug. 25 attacks was designed to prod the military into a predictably violent overreaction, drawing global attention to their cause and stirring more rage among the Rohingya.

How big are they?

They are few in number and poorly armed, but their ranks are swelling. Observers believe ARSA only had several hundred trained militants—and many probably died in the recent attacks. But Rohingya refugees who have fled to Bangladesh say young villagers picked up crude weapons—clubs, knives and sticks—and joined their cause in the days after Aug. 25.

The military says it has killed 400 militants so far. It has posted photos of the basic weapons seized from people fighting under the ARSA banner, including petrol bombs and improvised explosive devices and has said its forces have been ambushed by groups of up to 150 at a time.

ARSA do not have the capacity to defeat Myanmar’s well-armed forces in conventional terms. But they have already spread insecurity that has tipped Rakhine into crisis and potentially created a vast pool of recruits.

Around one third of Myanmar’s 1.1 million Rohingya have fled the country since Aug. 25. The question is now whether those left behind will join a growing insurgency.

Myanmar’s troops and police have once again been accused of the rape and murder of Rohingya civilians as well as burning down their villages. Analysts say the situation is ripe for infiltration by networks with a global jihadist agenda such as the Islamic State group.