Home Latest News What is TATP? 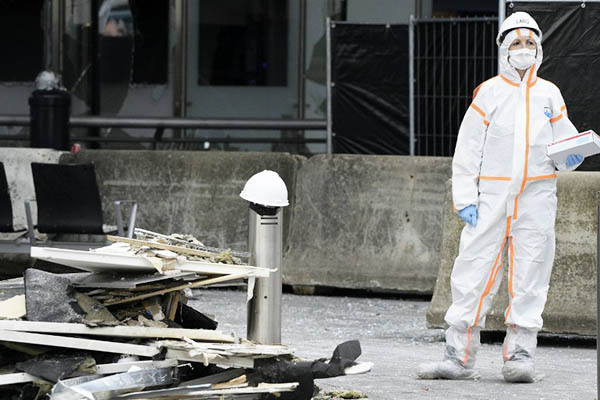 A look at the Islamic State’s DIY explosive of choice.

Used by jihadists everywhere from Paris and Brussels to the battlefields of Syria and Iraq, the easy-to-make and deadly explosive TATP—known as “the mother of Satan”—has become the explosive of choice for the Islamic State group.

A familiar set of ingredients were found in a jihadist hideout after this week’s attacks in Brussels, Belgian prosecutor Frederic Van Leeuw said Wednesday, listing 150 liters of acetone, 30 liters of oxygenated water, detonators, and a suitcase full of nails and screws.

They are the essential components of triacetone triperoxide, or TATP, of which 15 kilograms were found in the apartment.

Discovered at the end of the 19th century by a German chemist, TATP is a homemade explosive created by mixing precise quantities of acetone, oxygenated water and sulfuric, hydrochloric or nitric acid—all of which are easily available in high street stores.

Nail polish remover is essentially acetone, while oxygenated water is a commonly used disinfectant. The mixture creates a coarse powder of white crystals that requires only a basic detonator to explode, triggering a huge blast of burning gas.

Jihadists have set up entire labs—at first backroom affairs, but increasingly reaching industrial levels—to produce TATP and other explosive materials in Syria and Iraq. In a report published in February, the NGO Conflict Armament Research said 51 companies had supplied the components needed to make homemade explosives at semi-industrial levels to the Islamic State group.

The companies were spread across 20 countries, including Turkey and Russia, but also Belgium and the United States.

“Contrary to what is sometimes said, watching a tutorial on the Internet is not enough,” said an explosives expert with the French army, who asked not to be named. “Someone has to show you how to do it at least once. But there isn’t a shortage of instructors among the guys in the Islamic State in Syria and Iraq. And once you’ve been shown, you can do it in your kitchen.”

The most delicate part is adding the acid to the mixture, which lets off heat and can catch fire, but a simple mask is all that is normally needed for protection.

TATP was used in the suicide vests of the attackers in Paris on Nov. 13, and early investigations suggest it was also used by the bombers in Tuesday’s attacks on Brussels airport and a metro station that left 31 dead.

Another 270 people were injured, many of them sustaining severe burns.

A detonator can be made with a thin metal tube filled with paste and linked to two electric wires that will spark and trigger a flame when connected. But they can just as easily be bought ready made from a shop.

Salah Abdeslam, one of the suspected Paris attackers who was arrested in Brussels last week, bought a dozen pyrotechnic detonators at a fireworks store in the Paris region without raising the slightest suspicion.

“The main problem posed by TATP is the easy availability of ingredients,” said a French counter-terrorism official, speaking on condition of anonymity. “We can monitor sales of oxygenated water, but if these guys are smart enough, they will buy small quantities from 20 pharmacies. It’s the same for acetone and acid.”

The official said his team had spent an afternoon learning how to make explosives purely with items bought from a DIY store. “It was worryingly easy,” he said. “In half an hour, we had made an explosive. Half an hour later, we had blown it up. And the explosion was big.”