Home Culture What to Call Bill if Hillary Clinton Wins?

What to Call Bill if Hillary Clinton Wins? 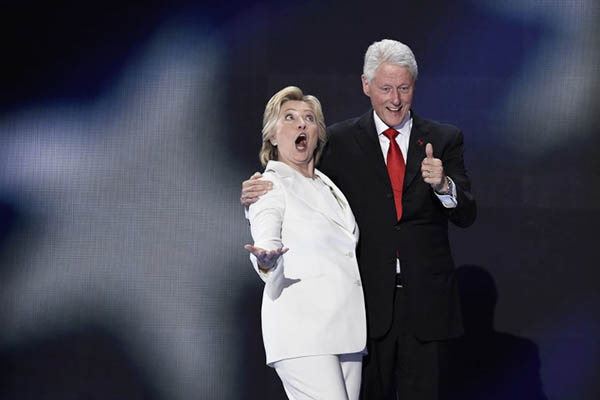 Will the former U.S. president be the first gentleman or will there be confusion over him still being referred to as ‘Mr. President’?

Hillary Clinton’s possible election next week to America’s highest office has raised a sticky question: What’s the best way to refer to the president’s male spouse? There have only ever been male presidents in the United States with female spouses. One president, James Buchanan, remained a lifelong bachelor.

Bill Clinton poses a special dilemma—not only he would be the first male presidential spouse, but also the first former president to return to the White House as a spouse. The former Arkansas governor was elected president in 1992 and again in 1996, serving eight years in office.

It is common to use the honorific “president” to anyone who has served in the post, even after they leave office. But if the prognosticators are correct, and Hillary Clinton wins the presidency, then Bill Clinton can no longer be referred to as President Clinton after his wife’s inauguration in January without creating massive confusion.

Lisa Grotts, a certified etiquette expert, told AFP that the dilemma of how to address a male spouse has been dealt with at the state level, which may, or may not, provide a roadmap. “In the U.S., we have six female governors, and their husbands unofficially go by First Gentleman. But there are no rules for presidential spouses,” she said. “Once a president, always a president and that will always be his title for life,” she said.

Allida Black, an expert on first ladies with the White House Historical Association, told AFP that there is no question that, in terms of protocol at least, Bill Clinton’s “title will stay the same” when the first couple are presented at formal events—at a state dinner, for example.

“It will be President Clinton and former president Clinton,” Black said. “We went through the same thing with the Bush family,” she continued, referring to George H.W. Bush, the 41st U.S. president, and his son, George W. Bush, the 43rd. “We had President Bush and former president Bush, so when they were together, they were introduced that way, and the Clintons will be introduced the same way as well,” she said.

What is clear, is that Bill Clinton will not revert to the title of governor or former governor, which would be a breach of protocol. “It would be a lesser title than being former president,” Black said.

The first lady traditionally has her own staff and budget in the White House, and typically adopts causes that are more or less non-controversial. Laura Bush took on the issues of reading and literacy; Michelle Obama tackled obesity, and good nutrition via her White House garden. She also gave greater visibility to support for veterans and their families.

Another issue brewing in political circles is precisely what official role the First Gentleman—if that is what he’s called—will play. Bill Clinton has promised to step away from the family’s Clinton Foundation charity if his wife is elected.

He remains relatively fit and active, but has sworn off one of the endeavors that has occupied much of his time in retirement and proved quite lucrative—speechmaking—which earned both Clintons millions of dollars once they were no longer in public office.

Officially, Bill Clinton will not be allowed to take paid government employment during his wife’s tenure. “He cannot have an official paid position but he could be an unofficial adviser to her,” said Black.

That would reverse the arrangement they reached during Bill Clinton’s presidency, when Hillary Clinton headed up his administration’s failed efforts to bring about comprehensive health care reform. Hillary Clinton earlier this year suggested that she might task her husband with spearheading her administration’s efforts to revitalize the economy—a nod to his vaunted presidential success in balancing the U.S. budget while creating millions of jobs.