Home Latest News What We Know About the Brussels Attacks

What We Know About the Brussels Attacks 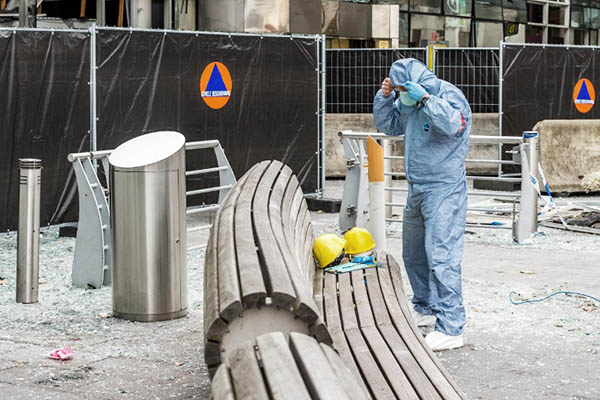 An outline of the information available on Tuesday’s assault in the Belgian capital.

Belgian investigators are gradually piecing together how three men staged three attacks in Brussels, killing 31 people and wounding 270 others, while a fourth assailant fled.

This is what we know so far about the two attacks on Tuesday at Brussels airport and at an underground train station near European Union offices in the city center.

Both of them had been photographed moments before on airport security cameras pushing trolleys with dark bags through the departure hall. A man wearing a dark hat who was pictured next to them is believed to be a third would-be airport assailant whose bomb failed to go off and who fled the scene.

The bombs ripped through the building, full with hundreds of passengers, killing and horrifically maiming people, causing part of the ceiling to cave in and shattering windows.

As bomb defuse experts arrived at the scene later in the day, a third explosion tore through the evacuated airport but wounded no one. The bomb was in an abandoned bag left by the third assailant and contained more explosives than the other two bags, suggesting many more people would have died had it detonated earlier.

Just after 9:00 a.m., a suicide bomber struck in the Maalbeek metro station, just hundreds of meters from the main E.U. offices and many of the 28 E.U. diplomatic missions. The explosion ripped apart an underground train in the station, as a second train stood next to it, headed in the opposite direction.

The federal prosecutor announced the latest casualty toll on Wednesday, with 31 people killed and 270 wounded in the two attacks, a toll that could rise further as many of those in hospital are listed in serious condition. There was no breakdown immediately available of how many died at each of the two attack sites.

Belgian Foreign Minister Didier Reynders told Belgian television RTBF that there were around 40 nationalities among the dead and wounded. They included citizens of Britain, Colombia, Ecuador, France, Portugal and the United States, as well as three to four staff from the E.U.’s executive arm, the European Commission.

Following a fingerprint analysis, the federal prosecutor on Wednesday named Ibrahim El Bakraoui as one of the airport suicide bombers. He is one of the three men photographed pushing the trolleys before the attacks.

Turkish President Recep Tayyip Erdogan said Wednesday his government had detained and then deported Ibrahim El Bakraoui, and accused the Belgian authorities of failing to confirm his links to terror. Turkey has also accused France of failing to heed its warnings about Omar Ismail Mostefai, one of the jihadists who blew himself up at the Bataclan concert hall in Paris in November.

Police sources said the second airport bomber was identified as Moroccan-born Najim Laachraoui whose DNA was found on explosives used in the Nov. 13 Paris attacks.

Bakraoui’s younger brother Khalid El Bakraoui was identified by the federal prosecutor as the suicide bomber who attacked the metro station, also following analysis of his fingerprints. The identity of the third airport suspect, who fled the scene, has not been established.

Prosecutor Van Leeuw said the Bakraoui brothers are Belgian nationals with major convictions “not linked to terrorism,” with Khalid a convicted car thief and Ibrahim sentenced to nine years in prison for firing his gun at police.

However, Khalid is suspected of having rented properties used to prepare the November attacks in Paris, including a property in the Belgian city of Charleroi from where alleged ringleader Abdelhamid Abaaoud set off to lead the assault in the French capital.

A taxi driver who drove three passengers to Brussels airport—who may be the men in the airport security camera images—led police to carry out a key raid late Tuesday in the Brussels neighborhood of Schaarbeek.

It was there that investigators found an unexploded bomb, an Islamic State group flag and bomb-making materials.

Prosecutors confirmed they had found 15 kilograms of TATP high explosives in the flat. They also found chemicals including 150 liters of acetone, 30 liters of liquid oxygen, detonators, a suitcase full of nails and other bomb-making equipment including plastic trays, tools and ventilator.

In a trash can in the same street, police found a computer containing Ibrahim El Bakraoui’s will, in which he said he was rushing into action because police were hunting him and he did not want to end up in a jail cell next to a man believed to be Abdeslam. “I don’t know what to do,” he supposedly wrote.

The Belgian police are “actively” searching for a man appearing in the security footage at Brussels airport and walking next to Ibrahim El Bakraoui. The federal prosecutor said the man sought—dressed in a light colored shirt and jacket while wearing a dark hat and glasses—fled before the explosions.