Home Latest News What We Know About the EgyptAir Crash

What We Know About the EgyptAir Crash 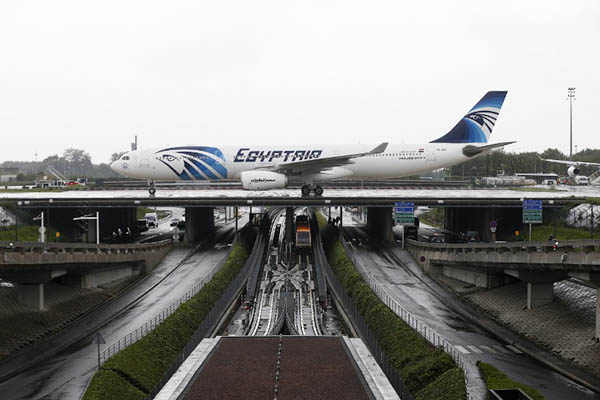 A summary of the circumstances surrounding the passenger plane crash.

Thursday’s crash of an EgyptAir passenger plane near a Greek island en route from Paris to Cairo with 66 people aboard remains unexplained.

This is what is known so far:

The Airbus A320 was in Eritrea, Egypt, Tunisia and France on Wednesday, according to the website FlightRadar24. It began the day in the Eritrean capital Asmara, where it had arrived from Cairo on Tuesday evening. It took off at 0130 GMT for Cairo, arriving two-and-a-half hours later.

The plane took off again at 0621 GMT for Tunis, a flight lasting a little more than three hours. After one hour on the tarmac, it headed back to Cairo, arriving at 1317 GMT. Two hours later it flew to Paris’s Charles de Gaulle airport, landing at 1955 GMT. It left the French capital shortly after 2100 GMT and was to have landed in Cairo at 0305 GMT on Thursday.

The flight’s 56 passengers included a small boy and two infants as well as a seven-member crew and three security officers, according to EgyptAir. The passengers included 30 Egyptians, 15 French nationals, two Iraqis, and one passenger each from Britain, Canada, Belgium, Portugal, Algeria, Sudan, Chad, Saudi Arabia and Kuwait.

The pilot’s last contact with air traffic controllers was around 0005 GMT Thursday when he mentioned no problem, and the plane had not deviated from its course, Greek civil aviation authorities said. He was even “in a good mood, and thanked [the controllers] in Greek,” said civil aviation chief Constantin Litzerakos.

The plane disappeared from Greek radar screens around 0029 GMT while already in Egyptian airspace, a Greek aviation source told AFP. The plane crashed off the Greek island of Karpathos, between Rhodes and Crete.

Egyptian Aviation Minister Sherif Fathy said a terrorist attack was a more likely explanation for the crash than a technical fault.

French President Francois Hollande said “no hypothesis is ruled out or favored [including the] hypothesis that everyone has on their mind—a terrorist hypothesis.”

EgyptAir initially said it had been informed of a “distress message” by the military, but the army later stated there had been no emergency call.

Greek media reports that a sailor in the area saw a ball of fire in the sky have not been officially confirmed.

The Greek army told AFP that possible debris from the Airbus A320 was spotted southeast of Crete by an Egyptian transport plane within Egyptian airspace.