What You Need to Know About Election Night in America 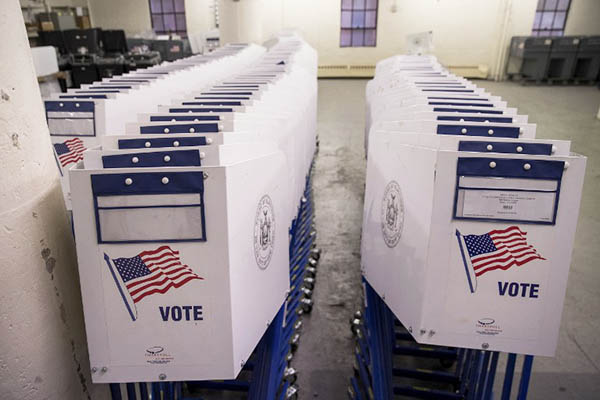 A primer on how the next U.S. president will be chosen.

Americans are getting set for a long Election Night of waiting to see who the 45th U.S. president will be—Hillary Clinton or Donald Trump. Here are the key things to know: what it takes to win, which states are the ones to watch, and how long it all might take for the winner to emerge:

Rather than one big nationwide election, this is really 51 small ones—in the 50 states and the U.S. capital Washington. As the results come in, they will form an electoral map that colors each state red for the Republicans and blue for the Democrats.

This shaded map is a fixture of American politics every four years, with news media and web sites fashioning them to give a real-time picture over the course of Election Night to illustrate how the candidates and parties are doing. In the White House race, the winner needs at least 270 of the 538 electoral votes up for grabs.

The first surprises could come from Georgia if Trump loses that normally Republican-leaning state, and if Virginia, won by Barack Obama in 2012, eludes Clinton.

Half an hour later, the surprise could come from the battleground states of Ohio and North Carolina, which have 18 and 15 electoral votes, respectively. Ohio, a fallen industrial powerhouse, is historically Democratic territory while North Carolina tends to vote Republican. But either could swing the other way this year.

Over the next 90 minutes or so, a burst of results from some 30 states accounting for dozens of electoral votes will further fill in the red and blue electoral map.

All eyes will be on Florida—an ethnically and politically mixed snapshot of America that accounts for a whopping 29 electoral votes. Obama won it narrowly in 2012. Back in 2000, in the historic disputed election that kept the nation on the edge of its seat for days, George W. Bush defeated Al Gore there. Much attention will also be paid to the small northeastern state of New Hampshire, which normally votes for Democrats but is seen as possibly up for grabs this time, and Pennsylvania, another former industrial powerhouse that normally leans Democratic and holds a prize of 20 electoral votes.

Heading west, Arizona and Texas—conservative states that border Mexico—are seen as possible prey for Clinton. And in the other direction, Colorado, Michigan and Wisconsin—Democratic strongholds that account for 35 electoral votes between them—are seen as maybe going to Trump.

How the results come in

U.S. TV stations announce winners in each state one by one through partial vote tallies, exit polls and their own projections. They tend not to bother to wait for word from heavily Democratic California and its 55 votes, where polls close at 0400 GMT, to call the race on who will be the next president.

But this year, the race could stretch well into the night if the final polls are correct and some of the states, especially Florida, are in near-dead heats.