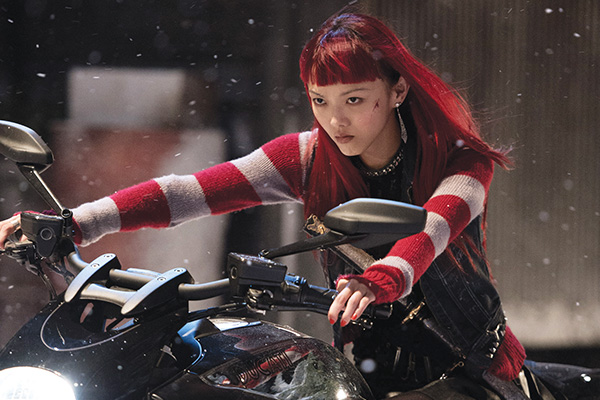 Cinema has long held a mirror to society, both present and past. Its contribution to the cultural fabric is not, as F. Scott Fitzgerald so eloquently put it, “exactly minus zero,” but substantial. The movies serve as one of many cultural barometers, informing us where we are, and where we need to be. And there’s a recent trend emerging in Hollywood that the most optimistic of cineastes might call groundbreaking.

“What’s happening right now, I think it’s about time, to be honest,” says Michelle Yeoh, who served as a torchbearer, playing a Bond girl in 1997’s Tomorrow Never Dies. “There are so many terrific Asian actresses, and the world is so global now that I don’t think our passports define us. It shouldn’t be so unfathomable to have an Asian actress be the love interest.”

Yeoh had to endure a grueling casting process to land the role of Col. Wai Lin, a Chinese spy and ally/paramour of Pierce Brosnan’s 007. At one point, she almost lost out to buxom blond Natasha Henstridge.

“When I first started, you could literally count the number of Asian actresses on one hand that would appear in European or Hollywood films, and there was always a need to find an excuse for why there’s an Asian face in the middle of an all-white movie,” says Yeoh. “We’d have to be in the triads or in Chinatown and speaking funny English, which I found very objectionable.”

But why this sudden breakthrough in Hollywood’s casting diversity? It’s “a market thing,” as New Yorker critic David Denby told me.

In the first half of this year, China’s box-office revenue grew by a mammoth 36.2 percent from the same period a year ago, making it the world’s second biggest movie market after the U.S., according to the Motion Picture Association of America. Further, more than 70 percent of movie studios’ annual box-office revenue is now coming from international markets.

To court Asian box offices, American blockbusters, like The Wolverine and parts of Pacific Rim, are being set there. Western studios are even shooting different versions of their movies for Chinese audiences.

For example, the recent comedy 21 & Over, about a Chinese medical student tormented by parental-induced anxiety who alleviates medical-exam stress by partying on an American college campus. Before production began, executives at the studio, Relativity Media, told filmmakers they’d be shooting additional scenes in China for a customized version of the film, The Los Angeles Times reported. Relativity had brokered a deal with several Chinese companies, including the government-owned Huaxia Film Distribution Co., to partially fund the movie (along with other undisclosed benefits). Thus, the Chinese cut of the film has a radically different ending than the U.S. version.

“21 & Over, in China, is sort of a story about a boy who leaves China, gets corrupted by our wayward, Western partying ways, and goes back to China a better person,” said Jon Lucas, the film’s screenwriter.

Studios are also tweaking their films to make them more Chinese-friendly. Take World War Z. In an early cut of the Brad Pitt starrer, a scene had characters debating the origins of the zombie epidemic before coming to the conclusion that it all started in China, a Paramount executive told The Wrap. Fearing trouble with a release there, producers changed the origin to South Korea. And for last year’s remake of Red Dawn, the invading enemy army was North Korean, changed from the original Chinese in post-production in order to ensure access to China’s coveted box office. Even Iron Man 3 added additional Chinese characters and scenes to its Chinese version.

The change is not-too-subtle in Hollywood’s slate of future releases. Famous Asian names are part of ensemble casts in a host of hopeful blockbusters: there’s Tadanobu Asano in Thor: The Dark World; Maggie Q in Divergent; Ken Watanabe in Godzilla; Fan Bingbing in X-Men: Days of Future Past; and Li Bingbing in Transformers 4. Even so, the roles are usually supporting ones, around seventh, eighth, or ninth billing.

“There’s been a definite shift, and I can see it when we’re developing movies—the talk of the global audience, the talk of China,” says G.I. Joe Retaliation director Jon M. Chu. “Anything to make the movie more global is a good thing for a film that needs to make a lot of money back. And getting a big Chinese actor or actress in your movie is coveted now, but the quality of the part is another story.”

Maggie Q, a half-Vietnamese action star who has appeared in Mission: Impossible III, among others, agrees. “We are action, historical, hookers, or accented in a lot of what’s out there,” she says. “They are not looking for a woman like me to pair up with a white male heartthrob. It would take a pretty brave and open producer to have the vision for something more than what the mainstream has offered.”

She adds, “We need to be part of the solution. Even though it’s hard, we need to be walking away from roles that don’t move us forward. That’s how we change our circumstances.”

As far as global box office is concerned, Asia—in particular China—is only growing stronger. Four of the top 10 highest grossing films of all-time in China came from Hollywood, including the recent Iron Man 3 ($122 million and rising), which has already become its seventh-highest grossing movie ever.

A recent report by Ernst & Young even predicted that the U.S. movie box office would be eclipsed by China in 2020. So, you can expect to see more and more Asian faces in Hollywood films, in varying capacities.

“Lots of big social changes have happened for purely financial reasons, and that’s OK, but I think that’s just the beginning,” says the American-born Chu. “I’m excited for a future where there isn’t just an Asian actor included for box office, but an Asian-American actor that has nothing to do with being exotic, or from another land.”