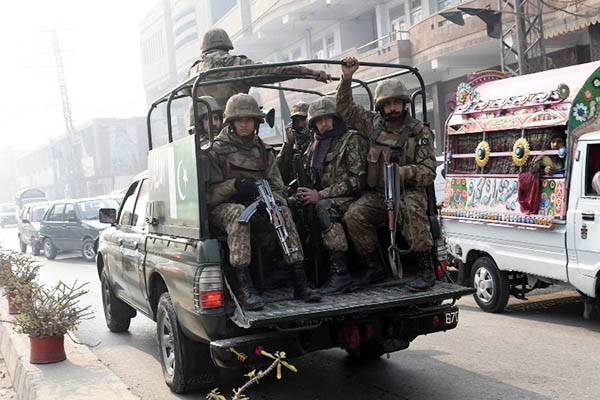 The government has yet to devise an effective counter-terrorism policy despite multiple attempts at formulating a comprehensive strategy.

In the wake of the gruesome terrorist attack on the Army Public School in Peshawar, while there is a broad consensus that this is a defining moment for Pakistan, the government seems still to be grappling for a strategy.

On the plus side, Imran Khan’s Pakistan Tehreek-e Insaf has decided to set aside its political differences with the PMLN government and call off its protest campaign. An All-Party Conference in Peshawar decided to set up a committee under the stewardship of the interior minister with representation from all parliamentary parties. The military has ratcheted up its aerial strikes and ground operations in the Khyber Agency, targeting what it claims to be the hideouts of Lashkar-e Islam terrorists allied with the TTP. The president has lifted the informal moratorium on capital punishment and six known terrorists have already been executed, with more hangings to follow.

Will this suffice? Unfortunately, no.

There is no dearth of plans and committees to deal with the issue. When the PMLN came into power, it decided to chalk out a national security policy with the internal component of that larger policy as the first to be worked on, presented to Parliament and put into action. It was to be called the National Internal Security Policy (NISP). The interior minister’s team—we don’t know who all comprised that team—took roughly eight months to come up with a policy that was presented to Parliament in February this year. It was not an ideal document but it was better than not having any blueprint. I had earlier reviewed it on the request of the interior minister. My review was published in these pages after the minister unveiled the policy.

One of the important points in my review of the NISP was that the National Counter-Terrorism Authority (NACTA) should act as the secretariat of the Interior Ministry. An allied observation was that neither NACTA nor the Interior Ministry, as configured, had the capacity to act as the umbrella department for a coordinated national counterterrorism effort. I had argued that much work needed to be done to reconfigure the ministry, as also NACTA, if there were any chance of this policy working.

That didn’t happen. The ministry remains what it has always been—incapable of taking care of internal security. Since then we have seen several spectacular attacks but the NISP lies dormant, as does NACTA. The Joint Intelligence Directorate mentioned in the policy never got off the ground reportedly because the military (read: the Army) does not want to cede that turf to the civilians. Result: we now need yet another committee to figure out an action plan. There are no experts in this committee and while one does not doubt their sincerity in fighting terrorism, sincerity alone does not make policy.

Ditto for the reaction apropos the lifting of the moratorium on executions. The deterrent effect of this is at best dubious. At worst, in the absence of a comprehensive policy, it is an effort to do something in order to be seen as doing something. It helps also in being cathartic by giving vent to the people’s anger at the Peshawar tragedy. In other words, while it is a good political move, it is not an effective component of a sound CT strategy.

To be clear, we need to punish terrorists who, after having been caught, have gone through due process. There are big question marks on the credibility of the process itself and they have been detailed in a recent report put out by Justice Project Pakistan and their team. The application of the Anti-Terrorism Act 1997 is deeply problematic, among other things, because of its ambiguous and amorphous definition of terrorism. The Act, instead of refining the definition, seeks to throw in everything including the kitchen sink into it. This, it should be obvious, has diluted rather than strengthened the law. In a number of cases, the law has netted offenders under the tag “terrorist” for crimes that do not fall under that category.

An additional problem is the Protection of Pakistan Act 2014. There is no clarity on whether the PPA has made the ATA extinct. In a more rigorous due-process system, both these laws, badly drafted as they are, could be used by smart trial lawyers to get people off the hook. It is ironic that the intention behind both laws was/is to avoid perverse acquittals.

Under the circumstances, however, and given the kneejerk reaction, everyone on death row under the tag ‘terrorist’ is now to be executed. The possibility that this will have the desired effect of putting down terrorism, especially if the government fails to address the structural problems that hamper a coordinated CT strategy, is at best remote.

There’s no gainsaying that extraordinary circumstances require extraordinary measures. There is no doubt also that even the best systems make mistakes, though they have mechanisms built into them to monitor miscarriages of justice. Even so, ‘exceptions’ are precisely that—exceptions. They cannot become the norm. The problem is that with the capacity of terrorist groups increasing because of today’s highly connected world, states are increasingly turning the exception into the norm. This is what I wrote in my analysis of the Protection of Pakistan Act in July this year:

“Romans practiced the concept of iustitium. Georgio Agamben in his State of Exception describes it thus: ‘Upon learning of a situation that endangered the Republic, the Senate would issue a senates consultum ultimum [final decree of Senate] by which it called upon the consuls … to take whatever measures they considered necessary for the salvation of the state … [Let them defend the state, and see to it that no harm come to the state]. At the base of this senates consultum was a decree declaring a tumultus (that is, an emergency situation in Rome resulting from a foreign war, insurrection or civil war), which usually led to the proclamation of iustitium [which] literally means ‘standstill’ or ‘suspension of law’ [and] implied, then, a suspension not simply of administration of justice but of the law itself.’

“A further problem has to do with situating the issue ‘at the limit between politics and law,’ what François Saint-Bonnet has described as a ‘point of imbalance between public law and political fact’ and Alessandro Fontana posits as a problem situated in an ‘ambiguous, uncertain, borderline fringe, at the intersection of the legal and the political.’ But the problem, even if posited thus, does not disappear. As Umberto Eco argues in his Tanner Lecture, ‘The legal standard is modus, but the modus is also the limit, the boundaries … If boundaries are not recognized, then there can be no civitas.’

“The issue of borders or boundaries becomes important because if exception is begotten of crises, it must therefore be ‘understood on political and not juridico-constitutional grounds.’ The paradox then is that these will be ‘juridical measures that cannot be understood in legal terms, and the state of exception appears as the legal form of what cannot have legal form.’”

A legal form of what cannot have legal form is the catchphrase. Notice also Eco’s reference to boundaries and civitas. Without boundaries there can be no civitas. But the concept works both ways. The state must punish those who violate those boundaries but equally, it must respect those boundaries themselves. That’s what law and due process are all about. That is also what informs the tension between law and exception even when it is law that denotes its absence in an emergency.

This is not mere academic discussion. It has policy implications. The government will do well to remember this.

During The Troubles, the period in Northern Ireland from roughly 1969 to the Good Friday Agreement in 1998, the British went through many phases in trying to put down the Irish insurgency. They created the Diplock Courts which did away with jury trials and where a single judge would hand down sentences. Doing away with the juries was owed to cases of perverse acquittals and because members would often be intimated. Even so, the Diplock Courts garnered much criticism. At the operational level, the British forces relied, for the most part, if not always, on intelligence-based, discriminatory operations and avoided provoking the population. Also, their main operational thrust was on netting the IRA leaders rather than using scorched earth policies to kill foot soldiers and civilians.

But discriminatory action requires first-class intelligence and highly trained forces with the will to not be trigger-happy. In low-intensity conflicts this is not an easy feat to achieve. But that is precisely what high-standard training is meant to achieve.

This must not be misconstrued as a verdict against ruthless execution of a plan. But there must be a plan to begin with. What else needs to be done?

Foremost, we need to sit down and disabuse ourselves of our current concepts of what counterterrorism is. It is not, I repeat, not about militarized units. It requires skills to track money and track communications. It requires controlling the narrative. The narrative itself must flow from who we are, how we conceive ourselves and our place in the world. Do we even believe in a nation-state? Because if we do not, then we open the first door to rejecting the basic unit of social contract in which we have to base everything else. When that happens, we are also prepared to act supra-state. There are expressions of that; they differ in their ideological origins but are consistent insofar as they violate the basic tenets of the social contract in which this collection, like all collections, is grounded. That is the beginning of the unravelling of the entire structure.

Once we decide to reclaim space, we will realize that the ‘mosque’ (as a metaphor) runs a parallel concept of nationhood and ideology. The corollary of this is that while we continue to fight terrorism, willy-nilly and often in a slipshod way, we tend to ignore that it is begotten of a certain mindset, a weltanschauung that wants to capture and sacralize the state and utilize it for pushing its millenarian agenda. The question is: are we ready to accept this as the biggest CT challenge and do something about it?

So far the answer is no. I am not sure, given the problems of organizational inputs, that we can do it now. It requires innovative strategies. Organizations ‘satisfice’; they do not optimize.

We are angry, that’s for sure. But nothing lasts forever, unless it is leveraged. Any policy, therefore, must move beyond the moment and turn this into an episode.