WhatsApp Seeks to Stem Fake News Ahead of Elections 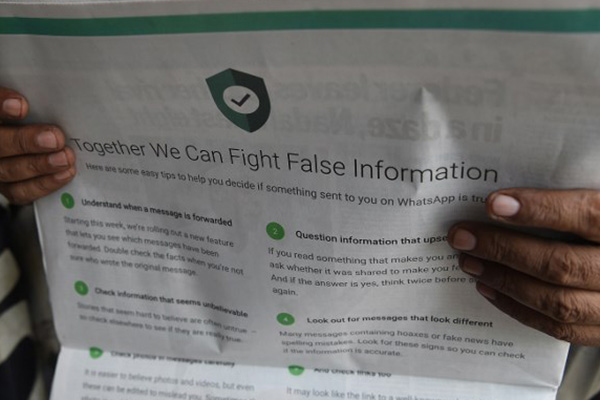 “Together we can fight false information,” says the full-page ad in Pakistan’s leading English-language dailies, listing 10 tips on differentiating rumors from fact. “Many messages containing hoaxes or fake news have spelling mistakes. Look for these signs so you can check if the information is accurate,” it says. “If you read something that makes you angry or afraid, ask whether it was shared to make you feel that way. And if the answer is yes, think twice before sharing it again.” The service also issued Urdu language advisories in major local dailies.

WhatsApp also announced the implementation in the country of a new feature allowing recipients to see if a message is original or forwarded.

The company had bought full-page advertising in India on July 10 after a wave of lynchings in the country were linked to viral “fake news” spread by WhatsApp about alleged child kidnappings.

WhatsApp, owned by Facebook, had come under pressure from Indian authorities to put an end to the spread of rumors, which have caused the deaths of more than 20 people in the past two months.

Millions of people use WhatsApp in neighboring Pakistan, where rumors, false information and conspiracy theories are ubiquitous. Such messages spread quickly, with no real way for recipients to check their veracity.

Pakistan also has a history of mob violence, and videos such as the murder of Mashal Khan—a journalism student accused of blasphemy who was killed by a mob in April 2017—circulate rapidly.

Parliamentary elections are scheduled for July 25.