Home Opinion When It Rains 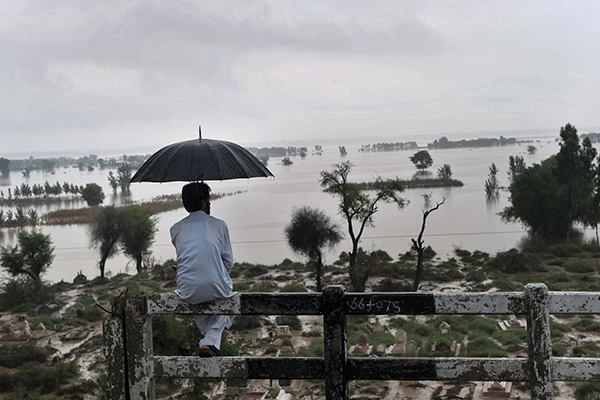 How Pakistan can cope with its unending water crisis.

[dropcap]P[/dropcap]akistanis are no strangers to the destructive power of water. For years‚ its contamination has sickened and killed millions‚ and its absence has shattered the livelihoods of tens of thousands more. This summer’s floods represent the latest‚ most harrowing chapter in a long‚ tragic story of water-related suffering.

In Pakistan‚ water is both nowhere and everywhere. It is nowhere because the country faces devastating shortages. Few countries in Africa‚ and none in Asia‚ have less per capita availability. In Sindh and Balochistan‚ rivers are mere puddles. Farmers and fishermen are left to gather firewood for a living or to seek better fortunes in crowded, water-stressed cities.

And it is everywhere‚ because‚ despite the shortfalls‚ Pakistan is not scarce of water. The resource is present‚ though precious—and repeatedly squandered by abysmal water management. Inefficient irrigation and drainage spawns excessive‚ saline agricultural water and ruined harvests. Canals and dams are poorly maintained to the point of neglect. Rusty pipes leak water instead of conveying it. And large dams‚ clogged by silt‚ are losing their storage capacities.

The recent deluge has exacerbated all of these problems. When the last of the floodwaters have receded‚ many of Pakistan’s water-distribution systems and storage facilities will have been destroyed. To be sure‚ even the hardiest water infrastructure would have stood little chance against these monstrous floods‚ yet better pre-flood maintenance would have translated into less widespread destruction.

The floods have not only ravaged canals and pipes but also swept away the drinkable surface water such infrastructure was meant to safeguard. With this shock to surface supplies‚ Pakistan’s growing dependence on groundwater—much of it found several hundred feet down—will intensify. In Quetta and Lahore‚ groundwater tables have been falling for years‚ and much of what remains is contaminated. Yet now‚ such resources will become options of first resort—if they can even be accessed. With hydropower and other energy generation facilities damaged or destroyed‚ activating electric tube wells will not be easy.

The human costs will only multiply. Some 630 Pakistani children died from diarrhea every day before the floods‚ so imagine what could happen to the 3.5 million children the U.N. has deemed at high risk of fatal waterborne disease. International aid is the obvious need of the moment‚ yet it can only go so far in a country notorious for mishandling large influxes of capital.

Islamabad and the provinces must take ownership of the water crisis and implement some politically unpopular measures. Instead of building only majestic large dams (Pakistan envisions the completion of five new ones by 2025) authorities must undertake admittedly less showy but infinitely more affordable and rapidly achievable canal repair projects. The water infrastructure can ill afford to wait 15 years for a few high-impact projects.

Taking ownership also means toning down the blame-India rhetoric. Some believe India’s activities on the western rivers of the Indus Basin divert water that is rightly Pakistan’s. The real culprits can be found not just in melting Himalayan glaciers and explosive population growth but especially in Pakistan’s misguided and wasteful policies.

Pakistan’s powerful vested interests must stop obstructing progress. Landed elites have traditionally benefited from the status quo and use their political connections to divert irrigation water from the rural and landless poor. These agricultural titans also resist calls for agricultural taxation‚ which would generate ample revenue to fund desperately needed infrastructure repairs. Today‚ with farmland ruined and livestock lost‚ it’s no longer business as usual for many of Pakistan’s large farmers. They now need help as much as their distressed fellow citizens.

This shared plight creates an opportunity for the nation to finally develop a comprehensive‚ sustainable national water strategy which ensures equitable resource sharing. Idealistic? Perhaps. But given the magnitude of a crisis that could well pose an existential threat to Pakistan‚ there’s time for nothing else.

Kugelman is a program associate at the Woodrow Wilson International Center for Scholars in Washington‚ D.C. From our Sept. 6‚ 2010‚ issue.