Home Features When the Ground Gives In

When the Ground Gives In 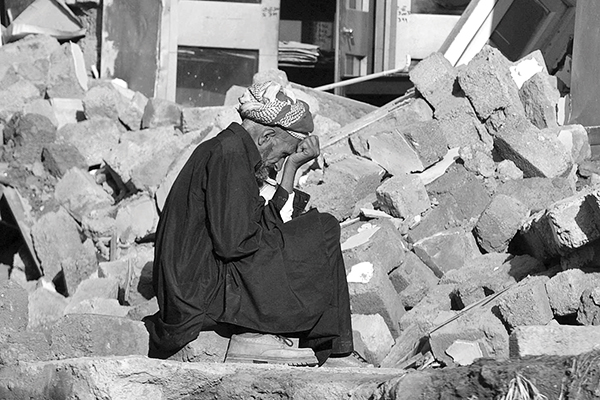 [dropcap]T[/dropcap]he militancy that plagues other parts of Khyber-Pakhtunkhwa province has largely spared the small town of Balakot. Nature has not. At around 7:30 a.m. on July 29‚ the swelling waters of the River Kunhar breached nearby homes. “The water started coming in from under the doorways‚ so we ran [for higher ground]‚” says Siddique-ur-Rehman. “Within 15 minutes‚ everything was gone.” Rehman has seen his house‚ and town‚ destroyed twice now in five years. The 7.6-magnitude earthquake that struck north Pakistan on the morning of Oct. 8‚ 2005‚ killed at least 73,000 people‚ including Rehman’s father and sister‚ and leveled Balakot.

Over the last 10 years‚ natural disasters have affected some two billion people around the world. Four percent of them were hit by earthquakes‚ which accounted for 60 percent of the deaths. No one can predict earthquakes‚ but seismic surveys can identify at-risk areas. Balakot‚ with its 25,000-strong population‚ says Pakistan’s Earthquake Reconstruction and Rehabilitation Authority‚ is one of the most vulnerable. Seismologists at Columbia University’s Earth Institute also say that there is a one in 10 likelihood of “very strong” earthquakes in Karachi and Lahore within the next 40 years. Is Pakistan prepared to handle the next big one?

“It is definitely advantageous to have frequent earthquakes‚” says Kit Miyamoto‚ a U.S.-based structural engineer whose firm Global Risk Miyamoto has studied this year’s earthquakes in New Zealand‚ China‚ and Haiti. Regular low-seismic activity raises awareness about better construction practices‚ he says. Preparedness must also include the development of brisk‚ emergency response reflexes at the grassroots. “Strengthening local communities’ ability to respond to disasters will probably save more lives‚” says Elizabeth Ferris of Brookings Institution‚ a think tank in Washington‚ D.C.

Immediately after the 2005 earthquake‚ the Army-led government of Gen. Pervez Musharraf set up a slew of disaster-response organizations: the Federal Relief Commission‚ ERRA‚ and the National Disaster Management Authority‚ which is now leading the post-floods efforts. Musharraf’s system of local governments‚ which could have provided an immediate response to the floods‚ was abandoned in 2009. The first images out of the disaster from five years ago were of Islamabad’s Margalla Towers reduced to rubble. Other buildings in the capital survived. New zoning laws were speedily put on the books, but remain poorly implemented. “Earthquakes don’t kill people‚ poorly-made buildings do‚” says Altaf Saleem‚ chairman of ERRA. “Construction regulations have to be very robust‚ and they must be strictly implemented.”\

The earthquake inspired an unprecedented groundswell of volunteerism and generosity across Pakistan. The response to the floods has been tepid‚ some say‚ because of fears about corruption.

When disasters strike‚ it is not unusual for officials to be criticized for not doing enough and not doing it quickly enough. Forget that the scale of destruction‚ as with the Oct. 8 earthquake and this summer’s floods‚ can make any preparedness measures seem inadequate. Then‚ as now‚ the Army‚ with its unmatched logistical capacity‚ was running impressive rescue and recovery missions. This time‚ with a civilian government in place‚ the Army’s work for the flood affected is being viewed by many as one-upmanship. On his compassion tour of flood-hit areas‚ Prime Minister Yousaf Raza Gilani has felt it necessary to state that the Army’s good work is being directed by his government.

Perception can be as important as preparedness. The earthquake inspired an unprecedented groundswell of volunteerism and generosity across Pakistan. The response to the floods has been tepid‚ some say‚ because of fears about corruption. ERRA’s Saleem disagrees. “The first $1.9 billion that came in for rescue and early recovery after the earthquake went straight from donors to U.N. agencies and nongovernmental organizations,” he says. “This is just how relief works.” Saleem says some 90 percent of the additional $3.7 billion pledged by foreign donors was funded and spent “in consultation” with his agency, including $1 billion on reconstruction of houses, health and sanitation facilities, and schools. The only direct spending federal agencies make from the earthquake funds comes from the $1.3 billion over seven years which Islamabad had committed in 2005. “We’ve not yet had a donors’ conference for the floods, so it’s unfair to complain of the world not giving us enough,” he says. Floods also have a lower reconstruction element, he says. (Last month, the U.N. revised its floods appeal for Pakistan to $2 billion.)

It is perhaps the nature of disaster rather than the nature of government that informs national and international responses. The earthquake affected some 30,000 square kilometers across nine of Pakistan’s 120 districts; the floods have hit 78. The death toll from the earthquake included 18,000 children; the floods have claimed a total of 1,961 lives. In many ways, the earthquake-hit areas, contiguous and confined, were easier to manage. The vastness of the flood-affected areas makes aid efforts appear thin, sporadic, and meager—even when they are not.

With the earthquake now yesterday’s news, agencies like ERRA are struggling for resources. “Our systems are in place, we’ve developed expertise and completed 13,000 projects,” says Saleem, “funding is the only challenge.” In fact, there are other challenges as well. The construction of New Balakot at Bakrial, some 20 kilometers away from seismically endangered Balakot, has ground to a halt. The project had been scheduled for completion in June. ERRA spent Rs. 1.5 billion on land acquisition at Bakrial and has only unfinished roads to show for it. Some 400 families took that cash, but are refusing to move.

Bakrial resident Muhammad Naeem claims square footage was “forcibly bought” from people like him. “We were paid much less than the market price,” he says. “We have certain demands and unless these are met we will not allow anyone to start work here.” Residents have clashed with federal officials, and even set survey vehicles on fire. “We’ve told the Khyber-Pakhtunkhwa government we can’t work like this,” says ERRA’s Saleem.

The agency’s work has also been hampered by the often confounding expectations of some of the earthquake victims. People like Mahmood Khan, a businessman, tell Newsweek stories of how Pakistani officials never provided the “five jumbo jets filled with [electricity] generators” that he believes the Japanese government sent five years ago for Balakot, and how the Saudi king’s gift of “Rs. 500,000 per person” is lying in the private bank accounts of government officials. In Balakot, the floods have damaged or destroyed at least 100 houses, including Rehman’s. Officials, he says, have promised Rs. 20,000 for reconstruction. “You can’t even build a washroom with that.”

With Nazar ul Islam in Balakot and Jahanzeb Aslam in Lahore. From our Oct. 11‚ 2010‚ issue.